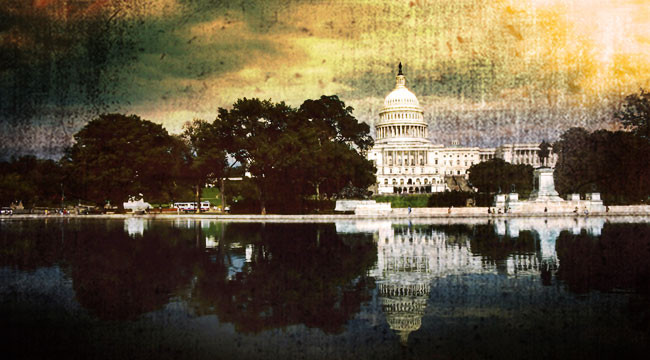 [This article originally appeared in Laissez Faire Today on August 16, 2013]

Today, we take time out from our regularly scheduled programming to thank the people who rule us. To the TSA agents at airports… to the IRS agents who audit our tax returns… to the NSA agents who are reading our mail… and to zombies everywhere…

Yes, dear reader, we’ve got to bring our thinking in line with the prevailing trend. And today, the U.S. is developing a real affection and respect for authority! Americans seem to like to have people rifle through their luggage and pat down their grandmothers at airports, for example. It makes them feel safer.

They want someone “in charge” of the U.S. economy too. That’s why the new head of the Federal Reserve is so important. What are the requirements for the job? It has to be someone who can keep a secret and tell a joke with a straight face.

The secret is that the Federal Reserve can’t really control the economy at all. It can influence it. And the influence it has is all negative; that’s the joke. By setting interest rates at any level other than that chosen by willing borrowers and lenders, the Fed distorts the price of credit. And distorting prices always leads to problems… either shortages or surpluses.

Also, by fixing rates at ultra-low levels, the Federal Reserve is actually stealing from one group and giving to another. The middle class, savers, and working people lose wealth. Hedge fund managers, bankers, zombies… and, of course, those loveable feds themselves… gain.

That’s why the rich are getting richer, while everyone else loses ground. They call it a “stimulus” program. And they’re right, it’s very stimulating — for those who get the money. As for the rest — well, the joke’s on them!

Dear readers should use this period to buy whatever gold they intend to hold through the next phase of the crisis. Prices are low. While they may go lower, you can’t count on it. Better to get what you need now. Buy gold now.

What’s the next phase? Of course, no one knows. But here’s what you should be prepared for:

Weakening stock and bond prices in the early autumn, followed by a crash in October or November. Gold will rise in anticipation of more Fed action.

You might not be aware, but the best candidate to take over at the Federal Reserve after Ben Bernanke leaves is yours truly. But so far, our phone has not rung. And the person not calling is the POTUS, Barack Obama. (We’re hoping that this very sincere note of appreciation, respect, and thanks to the feds will help our candidacy.)

As the end of Mr. Bernanke’s term approaches, if things seem to be going well in the economy, Mr. Obama will go with the safe choice — Janet Yellen. If they are going badly, as in the scenario you should be worried about above, he will go for the bolder candidate, Mr. Summers.

If Mr. Summers takes over, we can expect some real excitement. He is less sure of the benefits of quantitative easing than Ms. Yellen. But he is more sure of himself. He will be more direct…

So when the sound of helicopters reaches the news media, that is the moment when you will wish you had taken our advice and done your gold shopping now. We don’t know what will happen… or when. But no credit-based money system has ever survived a full credit cycle. This will be no exception.

But enough of that. Let’s talk about something else. Besides, it is not very civic-minded of us to kvetch about our authorities this week. The feds have mounted a full-on charm offensive. From what we read, the progress of mankind depends on them.

The feds pass out money as if they were seeking re-election… As long as it’s not your money, why not?

Edward Luce in the Financial Times: “Washington Ain’t That Bad.”

Martin Wolf: “The State Is the Real Engine of Innovation.”

What all these headlines have in common is a kind of breathtaking cloddishness… an appreciation of government that is so naive that you wonder about the species itself: How could the brightest people in the human race be so dull-witted?

Of Martin Wolf, we would expect no less. Said to be one of the 100 most influential people on the planet, it just raises questions about the other 99. His influence comes from his post at the Financial Times, where he leads the “pink paper” to its wrongheaded ideas. In his article last week, in the very first sentence, with no hesitation, nor even a qualification, he sets out in the wrong direction: “Growth of output per head determines living standards.”

He should have hesitated. Imagine an economy where everyone is given a tiny shovel and told to turn the earth. Then, in an effort to improve output per head, each is given a bigger shovel. Will living standards improve? Not a bit. They are all wasting their time, no matter how much dirt they turn over.

Having set out in the wrong direction, naturally, Mr. Wolf soon arrives at the wrong destination. There, he discovers a world well suited only to simple-minded intellectuals — where molecular research, Google’s search engine, the Internet itself, and even hydrofracking are the products of what he calls “state-supported innovation.”

Of course, the people who supposedly benefit from these innovations are the taxpayers. Do they want them? Do they get their money’s worth? Is this the best way to get these benefits? Are they actually beneficial at all… and how does anyone know? The questions never seem to occur to Mr. Wolf.

Instead, he accepts the feds’ storyline without quibble or irony, and regards the failure to appreciate the feds’ contributions as “the greatest threat to rising prosperity.” What? Greater than the lack of real savings? Greater than the burden of crushing debt? Or unfunded pensions? Or overfunded, overleveraged, overhyped speculations? Or jackass economists?

Meanwhile, here comes Clyde Prestowitz, an agreeable and intelligent man whom we met in Georgetown just last year. “The truth,” he says, “is that virtually none of America’s great inventors and entrepreneurs did it on their own. In the overwhelming majority of cases, they received taxpayer-supported federal help along the way.”

When we started our business, we looked around for a place to put it. At the time, the city of Baltimore was such a run-down dump that it was giving away buildings for $1. We took two of them. Was our business also “supported by government”? You bet.

It is almost impossible to do anything without receiving some form of taxpayer support. The feds pass out money as if they were seeking re-election. Support the universities? Support research? Support everybody! As long as it’s not your money, why not?

But does that mean that government funding is an efficient or effective way of allocating capital resources? How do you know if the investment will pay off? With hundreds of billions of dollars’ worth of taxpayer money running in every direction, some of it is bound to rub up against something that is actually useful.

But why would public officials with no skin of their own in the game do a better job of investing it than the people who earned the money in the first place? It’s easy to piddle away money. It’s hard to get a good return on it.

Nevertheless, Edward Luce looks on Washington with favor. It is “home to some of the brightest people in the U.S.,” he says. Hmmm… We lived in and around Washington for many years. As we recall, the gas station attendants and bootblacks were about as clever as those in any other city. But the closer you got to the halls of power, the more you ran into real nincompoops.

Years ago, sharing a car with a member of Congress from California, at first we thought he was just stupid. But after a while, we began to wonder. His conversation was so mindless it was as though it was recorded elevator music playing in a continuous loop. Soothing. Senseless.

When he turned his head, we took the opportunity to peer in his ear, thinking we might catch of glimpse of the electronic gear that made him work. We saw nothing but a normal ear… which just goes to show what great advances in bionics the feds have made!

But at least Washington has “the decency to apologize for itself,” says Luce. Huh? We can’t remember getting an apology. During our lifetime, we estimate that the feds may have squandered as much as $30 trillion. In addition, in Vietnam, Iraq, Afghanistan, and Pakistan… they have gotten approximately 2 million people killed… for no apparent gain.

Over the years, we have suffered countless imbecilities and indignities, from pointless gas lines and “Whip Inflation Now” buttons in the ’70s, to the TSA, the NSA, and a silly “war on terror” today. The war in Iraq alone cost an estimated $5 trillion (most of it still to be paid) and some 100,000 lives. Apology? Public hangings would be more appropriate.

But respect for authority is cyclical. And presently, the authorities are enjoying an upswing. People look to them to get things they can’t get on their own. Health care paid for by someone else… a retirement they can’t afford… and foolish pride they don’t deserve.

U.S. troops patrol the streets of towns we never heard of… American drones wipe out families we never met… the NSA listens in on the world’s conversations… Yes, thanks to the NSA, TSA, CIA, IRS, FBI, and Pentagon, no sparrow can fall anywhere in the world without it setting off alarms in America’s command centers.

Larceny, bullying, eavesdropping, assassinations… they all help us to stand a little taller and hold our heads a little higher.

Ed. Note: If you want to keep the bastards off your back, the best thing you can do is be informed. Every single day, The DailyReckoning email gives readers all the information they need to do just that… along with unique opportunities to safeguard their wealth from the very agencies who are threatening to confiscate it. So don’t wait. Sign up for your FREE subscription to The Daily Reckoning, right now.

“The more the Fed intervenes, the harder it is for it to reverse course without causing damage”…