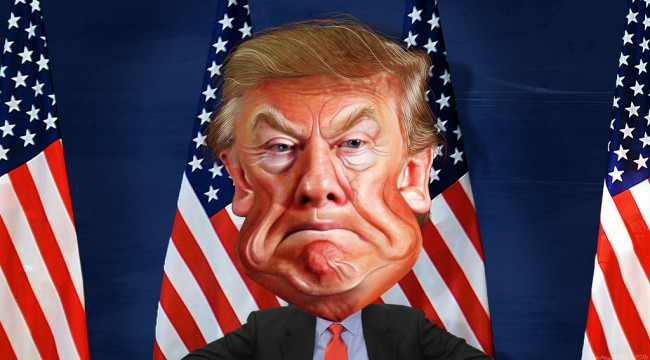 Something Weird About the Raid on Trump’s Estate

The strangest thing happened this week.

Then the next morning, Tuesday, Aug. 9, the price of gold barely moved from a recent trading level of $1,790 per ounce.

These two developments are very odd.

With respect to Trump, you can think what you want about the guy. Maybe you love him. Or perhaps you despise him. Or you might be indifferent to Trump, with a firm desire to keep this kind of political news out of your life.

But it’s worth noting that in the long history of the U.S., no president has ever had his home raided by any law enforcement agency, certainly not by armed representatives of the 114-year-old institution of the FBI.

So let’s be clear: Something very profound just happened. There’s a new data point in American culture, if not the legal foundations of the Republic.

Now we have something new, a different, very huge development. Armed FBI agents raided the home of a former president. That’s a modern Rubicon. It means that the U.S. now runs under a very different style of governance.

That is, it’s now somehow OK to send armed cops to barge into the home of a former president, where they can rummage, search and fish around for whatever they’re seeking under some unseen, unrevealed “warrant” signed — in this case — by a middling-level federal magistrate.

As a general rule, it’s part of the job of the FBI to get tactical and go kinetic. Yes, the FBI is there to take down bank robbers, drug dealers and foreign spies.

But should federal agents raid the home of a former president? It’s not in the American legal or law enforcement tradition, and seems much more like a stunt that one sees in a broken-down banana republic.

Armed agents inside the home of a former president are not what people in the U.S. are used to seeing, even on the worst days of incompetent national governance, of which there have been many.

Again, Trump or not, this is unprecedented. No one’s above the law, including former presidents. And if Trump’s guilty of some actual crime, he should be held accountable. But the way this was handled was remarkable.

Meanwhile, raiding the former president’s home is not what non-Americans — billions of people across the world — are used to seeing from the U.S.

In particular, ransacking the president’s home is not customary procedure within the one nation whose currency is ubiquitous in world trade, commerce, valuation of goods and services and preservation of wealth.

And again, one cannot overemphasize what just happened: This is different.

Yet the day after the event, the price of gold barely budged.

One might think — indeed, I thought — that we would see gold up in price by $100 per ounce. Because obviously, countries that send armed agents to raid the home of former presidents are sending a message of deep, seismic political instability to the entire world.

And it wasn’t just a couple of lawyers and maybe a security guard walking up to the front gate to knock on the door and have a conversation. Not a low-key, civilized encounter.

No, this was a platoon of armed agents. And at this stage one might be forgiven to borrow from what Benjamin Franklin said in 1787 after drafting the Constitution: “A banana republic, if you can keep it.” (No, he didn’t say that exactly. Franklin left out the “banana” part.)

Now think about this from the perspective of people who hold dollars. Is this what you want to see from the country that administers the world’s reserve currency?

And most of the world’s agricultural products trade in dollars. Plus minerals and metals. And manufactured goods, ranging from shoes and socks to automobiles and advanced electronics. And services, of course.

The Dollar Is Built on Trust

All this makes for a heck of a lot of dollars, which are backed by what, exactly?

Well, dollars are backed by trust. And definitely, dollars are not backed by gold. Not since August 1971 when President Richard Nixon “closed the gold window,” as the saying goes.

So if you hold dollars, whether in the U.S. or abroad, you hold an instrument based on trust. You trust that you can hold dollars, preserve wealth for a while and then use those dollars to buy other things in the future. Because it’s not like you can ever turn those dollars back into the U.S. Treasury to redeem for the gold in Fort Knox.

At the same time, your dollars are only really worth other dollars, or via exchange rates they’re worth some measure of other currencies. Which is another way of saying that at root, the dollars in your pocket or bank are instruments of trust.

The root of that trust is based on the idea that the U.S. government is a working, functioning entity. For all its many tasks (and flaws), the U.S. government must maintain the appearance that it can properly govern the country, keep the economy rolling and create and maintain low-risk political-economic conditions to enable the preservation of existing wealth and creation of new wealth.

Meanwhile, the world has long been a very forgiving place toward the manifest flaws of the U.S. and its system of governance.

Indeed, the U.S. people routinely elect large numbers of numbskull, profligate politicians to run the country’s government. The politicians have set up vast, expensive bureaucracies and hired no end of officious bureaucrats. And the U.S. has a byzantine and labyrinthine tax code.

While over many decades the U.S. has mired itself in military quagmire, and often made a total mess of them — Afghanistan comes to mind, just a year ago. And still, people across the world continue to conduct business in dollars.

At the very least, all of this betrays the creation of a much higher-risk political-economic jurisdiction, with an accompanying new spin on the idea of trust in the U.S. government and its currency.

And yet the price of gold has barely moved. Not yet. Not so far.

Perhaps the public is simply numb to this kind of shock. The FBI raid comes across as just a small crack in a big dam. It’s all barely noticeable just now; another bizarre news item in an environment where outrageous things constantly occur.

But what will happen when this new development begins to sink in? What happens when more people begin to absorb the import of armed FBI agents in the president’s hacienda?

But ransacking the office of a former president is new and different. It breaks a certain level of trust in the soundness of the U.S. And looking ahead, how do a government and its currency regain trust? That’s a generational challenge, and to get there will take us all on a long, rough road.

If you don’t own some gold, you had better get some. And with that, I rest my case.