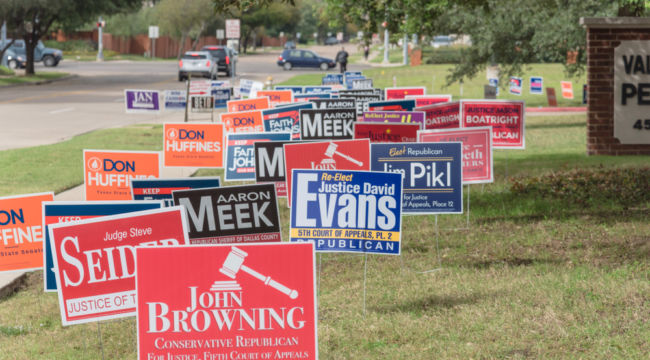 Unless you’ve been living under a rock somewhere, you know the critical midterm elections are tomorrow. The outcome will likely have a major impact on President Trump’s future in office.

For months, we heard talk of a coming blue wave that would put Congress back in Democratic hands. Basically, the idea was that Democratic voters were more motivated than Republican voters, that their disgust with Trump was so great they would all turn out to vote in November.

The Democrats would retake Congress, they would repeal much of Trump’s legislation, increase taxes and possibly impeach Trump.

But how likely is it that the Democrats will take back Congress tomorrow?

Let’s start with the Senate. Today the Republicans have a close 51-49 majority. There are a couple of independents like Bernie Sanders but they caucus with the Democrats, so they count as Democratic votes. So the split basically is 51-49 Republican.

Even though 51-49 is close, it gives Republicans control over these key areas, and that’s very important.

So could the Democrats take control with a 51-seat majority after tomorrow’s elections?

I won’t say it’s impossible, but I think the odds are extremely low. The evidence is overwhelming that the Republicans are going to keep control of the Senate. They might even pick up one or two seats. That means Republicans will continue to set the agenda and control the committees.

But the fight for control of the House is much closer.

The House has 435 seats. To take the House, you need to have 218. Right now the Republicans control the House comfortably. But how many current Republican seats would have to flip for the Democrats to take the House?

The answer is 23. That’s a lot of seats, but it’s doable and it’s happened many times in the past. So there’s a reasonable chance the Democrats can retake the House.

If so, they will possibly look to impeach Trump and maybe recently confirmed Supreme Court Justice Brett Kavanaugh.

Now, even if they don’t actually move to impeach, they could still hold hearings and investigations to embarrass the president and Kavanaugh.

The Mueller report, which has investigated Russian interference in the 2016 presidential election, should be released after the elections. It could certainly give grist for the mill, so to speak, and give the Democrats additional talking points.

If the Democrats do take the House, look for impeachment proceedings or hearings to get underway early in 2019.

Now, it’s important to realize that impeachment does not mean Trump will be removed from office.

Impeachment is a two-step process. Step 1 is simply an accusation, which originates in the House. Step 2 is a trial, which takes place in the Senate. If the Republicans hold the Senate, which I expect, the Democrats can impeach, but that merely sends it to the Senate for trial.

To remove a president from office requires more than a simple majority vote in the Senate, or 51 votes. Conviction requires a two-thirds majority, or 67 votes.

Even if the Senate swings 51-49 in favor of Democrats, conviction still requires 16 Republicans to cross the aisle to get 67 votes. And that’s almost inconceivable.

So even if the Democrats pursue impeachment, it won’t survive the Senate vote. There will be lots of fireworks, but nothing more.

What does it all mean for markets?

Markets hate uncertainty. They can adapt to either party controlling Congress, though they might have a preference. What they cannot adapt to is uncertainty.

Is it any surprise that we’ve had all this volatility lately? There’s a lot happening with markets right now, and by no means can you blame it all on political uncertainty, but it is likely a factor.

The good news is that, historically, stock markets go up after midterm elections no matter who wins. Whether it tilts Republican or Democrat, the tendency is for the stock market to go up because the uncertainty is over.

Being in cash right now is a good way to go. Cash is the way to take the volatility out of your portfolio. And once all the smoke clears, you can use that cash to pivot towards promising trades.