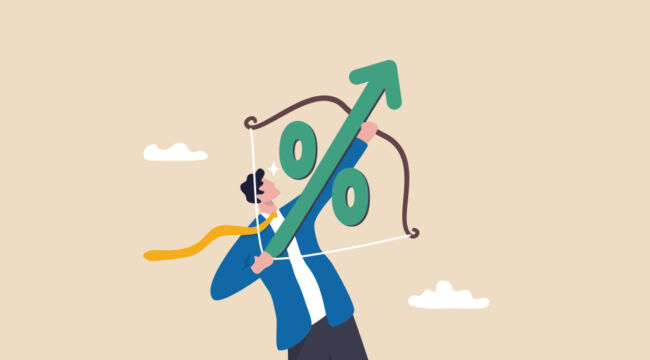 And so its target rate presently ranges between 3% and 3.25%. Not since February 2008 — over 14 years distant — has it floated to these heights.

How did the stock market take today’s announcement?

The market had absorbed the 75 points, yes. But the Federal Reserve’s statement telegraphed its plans to remain on the warpath for some time. CNBC:

The Fed’s interest rate projections caught some traders by surprise, in that they were much more hawkish for longer than many in the market expected.

Prior to the announcement, fed funds futures were pricing a target rate of 4.51 for fed funds after the March 2023 meeting. The Fed’s so-called “dot plot” released Wednesday shows a peak 4.6% in 2023.

You can only steer the ship toward the storm for so long, but eventually there comes a time when you need to batten down the hatches and with the Fed’s third consecutive 75-basis-point rate hike over the past four months, market participants should be looking for cover to weather the upcoming storm. Overall, today’s policy action is largely reflective of the economic backdrop and in order to slow the economy, the Fed clearly has to be aggressive.

Here is a question: Might the Federal Reserve have the tomahawks out through 2025?

A certain John Briggs — he of NatWest Markets — argues yes:

It’s really hawkish. Basically they’re saying it’s front loaded but they are staying restrictive all the way through 2025. They’re basically saying rates have to go higher and faster and even if we have cuts in ’24 and ’25, they’re still going to stay restrictive into 2025… three years of tight policy.

Just so. Yet we set little store by the Federal Reserve’s “dot plots.”

The historical evidence demonstrates beyond all question that they pack the predictive power of bird entrails, tea leaves, tarot cards, heavenly stars and crystal spheres — only less.

Yet it was the Federal Reserve’s “hawkish” note that frightened the horses this afternoon — initially and then again.

After absorbing the initial blow stocks mounted a surge into green numbers. But the pressure in the gauges would not hold… and stocks once again lost their steam by late afternoon.

Perhaps what the market lost in steam it gained in wisdom — recognition that the Federal Reserve has removed its helping hand.

Yet we are not concerned especially with the transiences and effervescences of the market. It is the long view that holds our interest… and our fascination.

All Good Things Must End

Joseph Calhoun III presides over Alhambra Investments. He has pondered the possibility that…

We are in the midst of a regime shift. I’m not talking about a cyclical change but rather a long-term, secular one. For all of my investing career — and for almost everyone’s entire investing life — interest rates have been falling. Disinflation that has occasionally morphed into outright deflation — think 2008 — has been the biggest trend in the world, proving for nearly four decades that investing genius is most often nothing more than a big ol’ bull market… All you had to do was ride out the rough spots… and wait for interest rates to fall and stocks to rally.

“If” he is right — of course. We do not know if today’s rising interest rates merely interrupt a trend or initiate one.