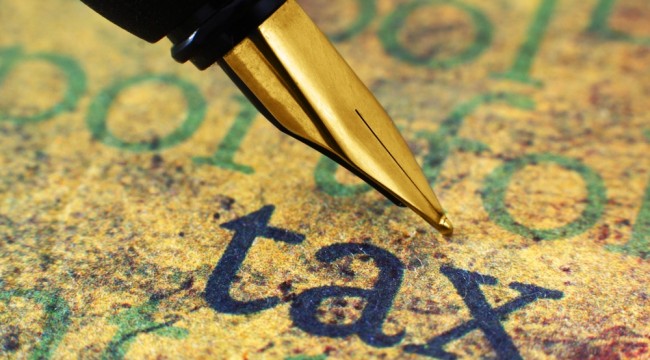 T-minus 12 days until open enrollment closes for Obamacare. It is crunch time for thousands as they decide if they want to enroll, and ultimately how much of a tax credit to accept in order to determine their first premium payment amount. Much attention has been lavished on the “positives” of the ACA’s tax credits (also called premium subsidies). White House press releases often highlight the impact of the credits while chiding others for not including them when discussing the new higher premiums under the law.

Yet the new reality of Obamacare’s tax credits has left finance reporters to pen articles warning readers to “take care” when considering a tax credit and providing strategies for how best to “protect yourself.” So what do finance reporters know that the White House doesn’t?

Just a few dollars of extra income could result in thousands of back taxes to be paid.

By accepting a tax credit, low-income or lower-middle class families face significant tax ramifications and potential financial risk. Congress has changed the rules twice on consumers for the credits, making the income cliffs steeper, and fully equipping the IRS to claw back overpaid subsidies (unlike the individual mandate penalty).

The flip side of the tax credits is almost unknown to the general public.

The ACA’s tax credits are given directly to the insurance companies, and are calculated on a sliding scale, based on family size, and in theory, to those making between 138% and 400% of the federal poverty level (FPL) in states that have expanded Medicaid eligibility. In states that have not expanded Medicaid, the tax credits are available to those making between 100% and 138% FPL.

However, individuals can claim them by estimating that they will make over 100% FPL even if they end up making 90% FPL in these states, effectively closing the coverage gap we have heard Medicaid expansion supporters and the media complain so loudly about. However, the tax credits are unavailable to those with an “affordable” offer of employer-based insurance, or for those on other forms of government-approved coverage like standard Old Medicaid or Medicare.

Yet, soon-to-be-published research by my colleague Jonathan Ingram will show that the tax credits phase out quickly for those in the exchange, and are therefore unavailable for many young people (18-34) in numerous states making far less than 400% FPL, based on the complex formula used to calculate the subsidies, and the price of the plans available on the exchange. This fact is only making the Administration’s job of convincing young people to sign up even harder.

The credits can only be used in a government-sanctioned Obamacare exchange. In other words, individuals purchasing private insurance on their own must decide if they want to keep their current insurance plan without a subsidy or drop their coverage to take the tax credit. Since so many states rejected the President’s call to renew policies for those facing cancellations, and the recent extension of that policy, millions of Americans are facing this exact decision of joining an exchange or buying elsewhere by March 31.

All citizens that take the credit must file a tax return to receive the credits regardless of their income. Failure to do so will result in them being prohibited from seeking a credit in the future. Married couples must file a joint return.

The initial tax credit calculation will be based on an applicant’s income tax return from the previous year, or a best estimate of what it will be next year. The credit can be taken in advance at the beginning of the year. However, individuals who enroll in the Obamacare exchange will run the risk of having to pay back a significant portion of the tax credit if their life circumstances change (more on this below).

The credit can also be taken on the following year’s return in the form of a refund. However, individuals who make this decision will be responsible for coming up with the full cost of the Obamacare exchange insurance at the beginning of the year. Individuals and families do have the option of taking a partial credit.

Republicans have by and large ignored the tax credit issue unless talking about the budget implications. Perhaps the silence is due to the fact that Congress has voted to change Obamacare twice to increase the financial risk that families could face when they take the credit.

Since the enactment of ACA, these limits have been amended twice: first under the Medicare and Medicaid Extenders Act of 2010 (P.L. 111-309), and then under the Comprehensive 1099 Taxpayer Protection and Repayment of Exchange Subsidy Overpayment Act of 2011 (P.L. 112-9). Congress changed the payback protection to vanish at the 400% poverty level and increased the payback amounts at 200% and 300% FPL from what they had been before.  The result will be surprise bills from the IRS in the mail come tax time 2015, in the order of a couple hundred dollars all the way up to full value of any subsidy received if a family crosses the 400% FPL threshold. (This could be $10,000-$12,000 for a family of four, as an example.) Just a few dollars of extra income could result in thousands of back taxes to be paid.

Our lives are constantly in flux. Lower and middle-class families rarely find themselves in static work and life environments, but that is exactly what Obamacare assumes. Even the most common and mundane life changes could significantly impact an individual’s financial situation if he or she decides to take the tax credit. So Obamacare recommends that individuals report these changes immediately.

In a recently released presentation by Centers for Medicare and Medicated Services (CMS), it was outlined that individuals will have to submit a new application to re-determine eligibility, triggering a special enrollment period and subsequently termination of the old policy.

As reported by Sara Hansard at Bloomberg:

“Life events resulting in a special enrollment period eligibility are:

“The presentation also listed life events that don’t result in special enrollment period eligibility: removing a member as a result of death or divorce; gaining access to other coverage, such as employer coverage; becoming pregnant; a change in tax filing status; a change in status as American Indians, Alaska Natives or tribal status; changes in disability status; corrections to date or birth or Social Security number; or some changes in income.”

However many of these rules will cause significant confusion as a death or divorce could change the income of a family significantly, making some households appear more wealthy as they jump down a family size level on the FPL scale. Or gaining employer coverage should make an individual ineligible for a subsidy.

To put a finer point on how many people are likely to be subject to a life change significant enough to trigger a payment to the IRS, UC Berkley’s Ken Jacobs and Dave Graham-Squire, Elise Gould from the Economic Policy Institute, and Dylan Roby at UCLA wrote an illustrative piece for Health Affairs. Largely overlooked by the media the article “Large Repayments of Premium Subsidies May Be Owed to the IRS if Family Income Changes are Not Promptly Reported,” made some important observations about the exchange eligible population in California that can be extrapolated to most of the rest of the country.

“…if no income changes were reported…38.4% of individuals receiving subsidies would be in families that were predicted to owe repayments…”

“If income changes of 10% or more were reported and the new income was used to adjust subsidy levels… 35.8% would…” still owe repayments. 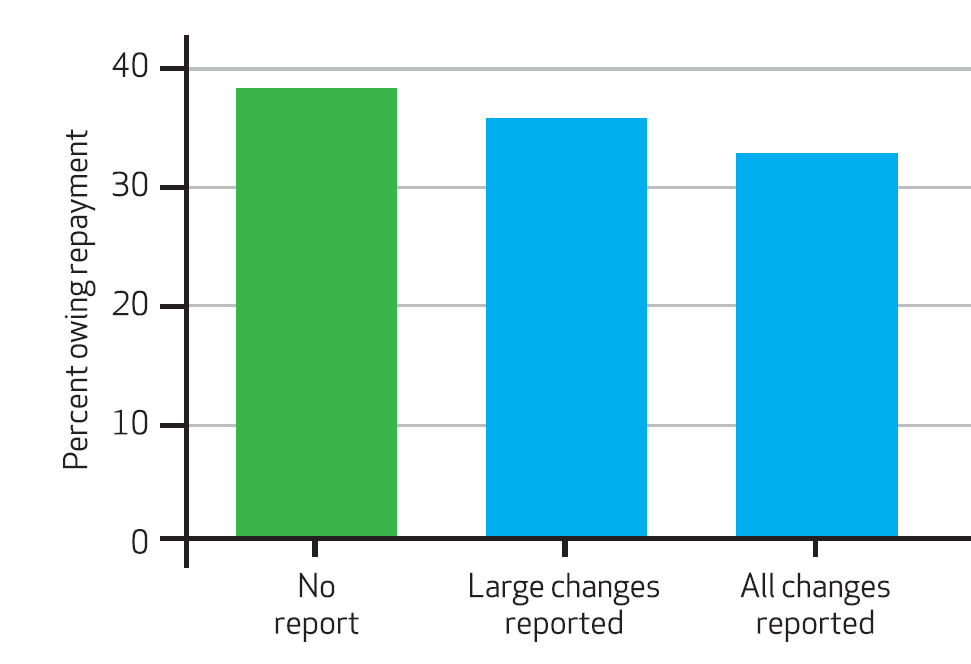 Median repayment amounts with no income changes reported or subsidy adjustments will be close to $900.

Nationally repayment will be a very big deal if we buy the estimates by the Kaiser Family Foundation that 48% of those that purchase individual policies will now qualify for a premium subsidy.

In a recently released report I co-authored with CPA Jonathan Small, “Too Risky To Exchange?” we looked at five very common life events that could dramatically impact citizens’ life, perhaps most dramatically near the income cliff found at the 400% FPL of eligibility. But there are income cliffs baked into Obamacare around 133% FPL and 250% FPL as well.

A pull quote from the Health Affairs piece might have hit the nail on the head for why the report was largely ignored by the media.

“If there is much media attention to the need for repayments, some people could be dissuaded from participating in the exchanges.”

Sadly the media has once again failed, and left millions of Americans with only half the information that is needed to make an intelligent decision about Obamacare’s tax credits. We can anticipate a flurry of sad stories of families receiving multi-thousand dollar bills from the IRS next April, and quotes from the families wondering why no one told them the truth about the Obamacare tax credits.

Josh Archambault
for The Daily Reckoning

Ed. note: Readers of the Laissez Faire Today email edition have been lucky enough to follow the story of a one-of-a-kind health care expert named Jud Anglin. For 4 years, he’s been on his quest to find the world’s best, most affordable health care. And in the process he’s helped thousands of people ostensibly “opt-out” of Obamacare. To read his full free report 4 Ways to “Opt-Out” of Obamacare and get the Best Healthcare When You Need It, sign up for the FREE Laissez Faire Today email edition, right here.

Josh Archambault is a senior fellow with the Foundation for Government Accountability as well as the Massachusetts-based think tank Pioneer Institute. He is the editor and a co-author of the book The Great Experiment: The States, The Feds, and Your Health Care (2012). His research has appeared or been cited widely, including in The Wall Street Journal, The New York Times, Fox News, and The Boston Globe.