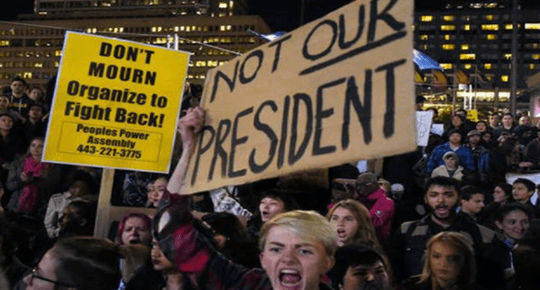 Can’t a fellow get a moment’s peace around here?!

We’d just settled in for supper after nine hours at hard labor. But before we could take our first hack, a racketing din broke over Mount Vernon Place… just one block from our Baltimore castle.

A flashback seized us — from last year’s riots. The approaching rumble of the crowd… the unifying chants… all the raucous hullabaloo of an army on the march.

We heard bellows of, “Not my president!”, “Two, four, six, eight, no to Trump and no to hate!”, and “Immigrants are welcome here!”

Ah, an anti-Trump protest. That’s it.

We may have caught some unrepeatable language among the indrift. But it’s possible we imagined it.

The clamor faded as the sloganeering mass marauded up Charles Street. Not 10 minutes after our peace was shattered, we were munching chicken cacciatore, gazing at the wall, this thought pinging around our noggin:

It’s going to be an interesting four years.

Similar scenes could be found in cities nationwide, east to west, north to south, sea to shining sea. And today, rumor whispers more than 2 million Hillary voters have signed a petition to overturn the election. On what grounds, we don’t know. But these folks probably won’t like Trump’s game plan for office…

Team Trump has set up a transition website, GreatAgain.gov, that spells out his policy priorities. Among them: “Building a wall on the southern border”… “Repeal the ACA… “Lift the restrictions on American energy.”

In other words, a complete repudiation of Obama’s legacy.

We caught something else on the website… something that could touch off a different mob than the one that wrecked our supper last night. This mob wears Armani and drives Mercedes-Benzes…

Trump says, “Both Wall Street and Washington should be held accountable.”

Fighting words, those. He’s sure in for a good hard sweating if he means it. As well challenge gravity itself. But if a man is best judged by his enemies, Donald J. Trump could end up a national saint…

David Stockman knows something about presidential politics. Ronald Reagan tapped him to be director of the Office of Management and Budget in 1981. And David knows this isn’t a mob that’ll scatter easily. It’s got too much to lose. Here’s David, calling in the tear gas:

During the eight Obama years, Washington essentially borrowed $10 trillion, or nearly as much as the first 43 presidents did over 240 years, while the Fed expanded its balance sheet by 5X more than had happened during its first 94 years of existence.

No one in America supported the Wall Street bailouts except a few ten-thousands Wall Street operators, hedge funds and other gamblers; and the politicians and Keynesian policy apparatchiks who saw it as a new route to power and spoils.

Maybe so, but today brings potentially bad news for David. And for anyone else pinning their hopes on Trump…

Politico tells us that establishment forces have already broken the perimeter. They’re moving in on Trump:

Donald Trump campaigned as an outsider who vowed to ‘drain the swamp’ in Washington, but the president-elect’s transition team is packed with veterans of the GOP establishment… people who cut their teeth working for Presidents George H.W. Bush, George W. Bush and former nominee Mitt Romney, as well as on the influence peddlers Trump accuses of ‘rigging’ the system against ordinary Americans.

How’s Trump going to “drain the swamp” if he wriggles with its snakes? Personnel is policy, as the saying has it. We’re not convinced these mincers and chiselers are fixing to be “held accountable” for too much.

But “Who else are you going to go to?” asks one lobbyist, without a hint of self-interest (ahem). “Unless you get some used car salesman from Dubuque, Iowa, you go to policy people.”

Just so. But with the highest respect for our friend the lobbyist, we’d gladly take our chances with the used car salesman from Dubuque, Iowa, thank you all the same.

We humbly suggest Trump give that fellow his chance. Could he do any worse than the “policy people”?