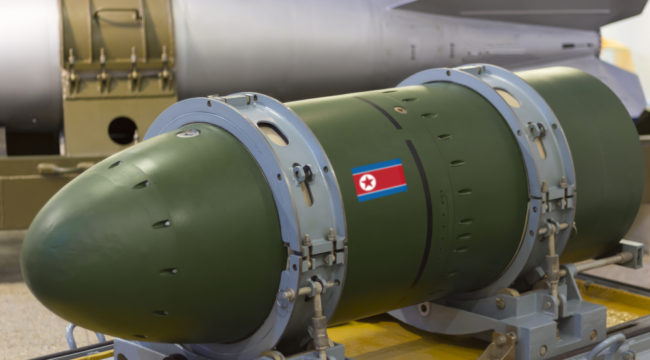 The North Korean Standoff Has Taken on an Added Dimension

The North Koreans are determined to develop a nuclear-armed arsenal of ICBMs to ensure that the U.S. does not attack the Kim regime.

But North Korea has suffered an unusual and self-inflicted setback in its nuclear weapons development programs — “mountain fatigue.”

Several tunnels collapsed recently, killing as many as 200 North Korean workers. It was not the total collapse some feared, but it was an indication that the threat of total collapse is real.

North Korea uses underground facilities in Mount Mantap to test its nuclear detonations. The most recent test on Sept. 3 was of an H-bomb, North Korea’s most powerful yet, estimated to have produced a blast of up to 280 kilotons.

A hydrogen bomb is different from an atomic bomb, and far more destructive.

The atomic bomb works by fission, literally “splitting” an atom, so that a neutron is emitted, collides with other atoms and causes a chain reaction with an enormous release of energy.

The combined effect of this latest blast and prior tests has hollowed out and weakened the structure of the mountain itself. Based on seismic readings from the area, including a series of earthquakes, Japanese and Chinese scientists had warned North Korea that the mountain was in danger of collapse.

Then on Oct. 30, the warnings proved correct.

It could prove disastrous to neighboring China because it could release a huge cloud of buried radioactive material that would be carried by prevailing winds over Chinese cities.

Now, North Korea will likely keep using the facility because they don’t care about worker deaths or radioactivity exposure for their own people or the Chinese.

Yet nature may have the last word. If the Mount Mantap facility is rendered unusable due to extraordinary damage, Kim will have to continue his nuclear weapons testing elsewhere. This implies tests in the atmosphere, something Kim had already threatened to do before this recent tunnel collapse.

In 1963, the U.S. and the Soviet Union agreed to stop testing nuclear weapons in the atmosphere, underwater, or in space. Yet North Korea seems willing to violate that international norm.

So atmospheric testing would be viewed as even more provocative by the U.S. and the rest of the international community. A collapsing mountain may therefore provoke one more escalation on the path to war in the form of atmospheric tests of nuclear weapons.

Meanwhile, the U.S. is ratcheting up the military pressure on North Korea.

The U.S. has a total of 11 aircraft carrier strike groups. Each strike group is led by a nuclear-powered aircraft supercarrier. Ten of the supercarriers are of the Nimitz Class and one is of the new Ford Class, with improved technology and other operating efficiencies.

At any one time, as many as eight of the carriers may be in homeport undergoing repair and maintenance, for training or otherwise awaiting deployment. Only four or five are actually underway in one of the U.S. Navy’s major areas of operation (AO) at once. But right now, three aircraft carrier strike groups are in the Seventh Fleet AO in the western Pacific, converging on the Korean Peninsula.

Each strike group contains more firepower than the entire navy of any other country in the world. Now the U.S. has concentrated three strike groups on Korea.

At a minimum, this is a show of force designed to convince Kim Jong Un to stand down from his efforts to build an arsenal of nuclear-capable ICBMs that can end civilization in the U.S.

Let’s hope that works. If not, these same vessels will be used to destroy the Kim regime and eliminate the threat once and for all.

The latter outcome is highly likely in my view.

The time for diplomacy is past and Trump is busy trying to drum up support for concerted action against North Korea that has as much regional support as possible. That was the driving imperative behind Trump’s Asia trip.

Leading officials have previously made it clear that the U.S. would engage in pre-emptive war with North Korea to stop their nuclear program if necessary. Secretary of State Tillerson also refused to rule out supplying nuclear weapons to U.S. allies including Japan and South Korea in order to deter North Korea on a regional basis.

Over the past six months or so, the U.S. stock market has learned how to normalize nuclear tests and missile launches by North Korea.

Last summer, for example, a new rocket test might cause the stock market to drop about 1% on fears of a war between the U.S. and North Korea. But the market would quickly recover as diplomats hit the airways to reassure investors that everything was under control (it’s not).

Then another missile would fly, the market would go down, it would bounce back, and all was well. Eventually the stock market learned to normalize missile launches.

It’s as if someone said, “Hey, if the markets are bouncing back every time, what’s the point of going down in the first place?”

No doubt the computer algorithms were adjusted accordingly. But, this is a little like a chain smoker rationalizing that somehow nicotine won’t kill him because he hasn’t died yet. That’s false, and the false belief will get you in the end. Still, we may be reaching the point where the market starts to take this seriously.

Right now the markets aren’t getting the message. They’ll be forced to wake up soon enough and reprice for these risks. You don’t have to wait for the market’s wake-up call. This looks like a good opportunity to lighten up on listed equities and reallocate to cash, Treasury notes, gold, silver and other safe haven assets.

When the bullets start flying, probably early in 2018, look for rallies in these assets — Treasury bonds, the U.S. dollar and gold, with potential collapses in emerging markets as hot money floods back into the U.S. as a safe haven in a world on the brink of war.

It may not seem like it now, but things can get serious fast.