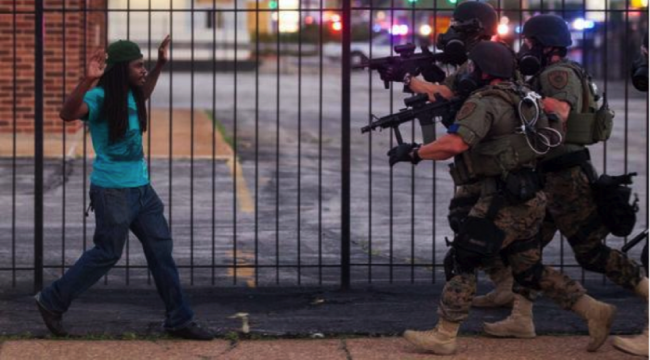 Our day began checking the Twitter feed of our friend Jim Rickards. We figured he might have something pithy to say about President Nixon “closing the gold window” 43 years ago.

Instead, we encountered this…

Well, that’s of a piece with the scenes from elsewhere this week… 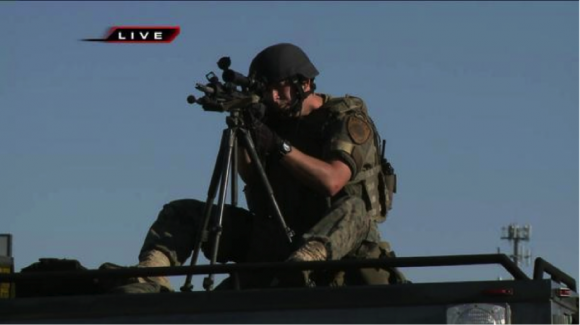 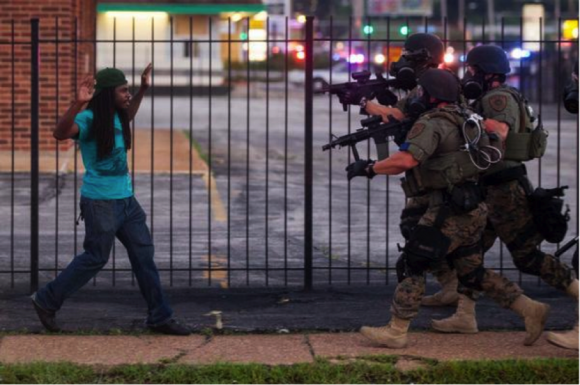 Toward the end of his book The Death of Money, Mr. Rickards writes the government response to a future economic crisis is predictable, even if the catalysts — which we discussed at length right here — are not.

“It will take the form of neofascism, the substitution of state power for liberty. This process is already well advanced in fairly calm times and will accelerate when violence erupts.”

And the seeds were planted on Aug. 15, 1971, when Nixon severed the dollar’s last tie to gold.

The destruction to date has been relentless, if slow motion: A paper dollar that bought $1 worth of goods in 1971 buys only 17 cents’ worth today. And that’s if you use the government’s manipulated measure of inflation.

As Rickards is wont to remind us, the destruction of a currency happens the way Hemingway described how one goes bankrupt — “Gradually, then suddenly.”

But there’s more to the story, as our friend Chuck Butler, president of EverBank World Markets, wrote in his Daily Pfennig…

“But the dollar immediately began to lose ground which is exactly what Nixon wanted it to do, for he had tons of debt left over from President Johnson’s great society, and Vietnam War, and needed to print dollars and get them weaker to pay down loans with cheaper dollars.

“Whoa, there Partner! Isn’t that the same darn thing we’re doing again now? You bet your sweet bippy it is! But only now we’re talking about trillions in debt, and Nixon only had a couple of billion to deal with.”

What might a “sudden” destruction of the dollar look like? We keep coming back to the “de-dollarization” plan as laid out by Russian officials.

Markets have gyrated in reaction to murky headlines that the war in eastern Ukraine has escalated big-time.

But we’re thinking more about the “de-dollarization” summit among Russian leaders last April… especially in light of this from last week: “President Vladimir Putin said on Thursday Russia should aim to sell its oil and gas for rubles globally because the dollar monopoly in energy trade was damaging Russia’s economy.”

The “dollar monopoly in energy trade” is another legacy of 1971: In 1974, Secretary of State Henry Kissinger cut a deal with the Saudi princes: Saudi Arabia would price oil in U.S. dollars and use its clout to get other OPEC nations to do the same. In return, the U.S. government agreed to protect Saudi Arabia and its allies against foreign invaders and domestic rebellions.

This is the so-called petrodollar system. Russia — still one of the world’s top three oil producers — wants out. And they just might bring along the rest of the world.

P.S. We’re constantly monitoring the prospects of “de-dollarization” in The 5 Min. Forecast. This essay is just a small taste of our analysis. However, “The 5″ is a publication reserved for a select group of readers who receive exclusive market commentary almost no one else is talking about… all in about five minutes or less. Click here now to discover how you can get join this unique list of in-the-know investors.

Would the U.S. have actually invaded Saudi Arabia to seize its oil?… How the U.S. Congress may provoke the Saudis into dropping the dollar…