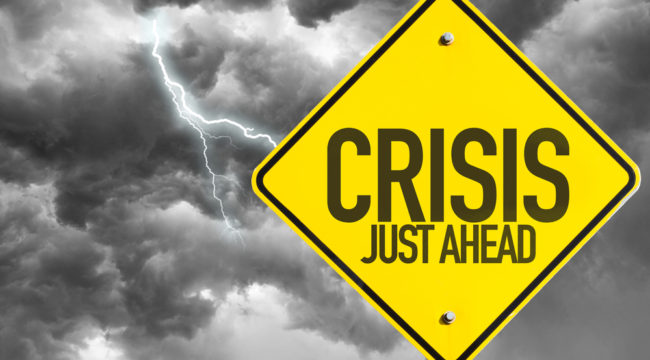 Markets Are Set up for a Fall

I guess we can all use a break now and then, and this seems like one of those weeks when not much is happening.

We had a tumultuous 10-day period from March 14–24, which included a Fed rate hike, Dutch elections, a weaker dollar, a stronger euro, a rally in gold and a nervous stock market in an orderly retreat.

The news cycle was spun up with endless stories about Trump and the Russians, the failed Obamacare repeal vote and a Supreme Court nominee.

Now, suddenly, markets have gone quiet. Stocks, bonds, gold and the dollar are all sliding sideways, while the news cycle is repetitious at best and boring at worst.

On the financial front, this quiet phase may be due to the fact that there is no Fed policy meeting in April, the May meeting looks like a nonevent and the next important Fed meeting is on June 14, a long 11 weeks away.

The Russia story has gone quiet for now as the relevant congressional committees do their investigating behind the scenes. The next big story in Europe is the French election on April 23, but it looks like a foregone conclusion that Emmanuel Macron and Marine Le Pen are easy first-round winners, and the decisive second round is not until May 7. Not much excitement there for now.

Does this mean investors can put their feet up and relax? No, not really.

The current quiet is deceptive, because it masks some powerful forces that will have a significant impact on markets by June.

Now is an excellent time to reallocate away from vulnerable sectors and increase exposure in other sectors that offer attractive entry points.

The Fed is set to raise rates again in June, but it is clearly tightening into weakness. This will slow the U.S. economy, possibly to the point of recession. The Fed will then shift to easing through forward guidance and probably “pause” on the September rate hike as they evaluate weak growth, slower job creation and disinflation.

Meanwhile, on the political front, the United States is descending into what can best be called a second civil war.

This new civil war is not violent or bloody like the first, but the stakes are just as high.

It is being fought over the issues of nationalism versus globalism, secure borders versus open borders, trade, sound money, domestic manufacturing, and so-called progressivism versus tradition.

American politics will remain in this dysfunctional state until either President Trump is politically disabled or his opponents are politically sidelined. This political dysfunction is likely to delay and dilute the impact of tax cuts and infrastructure spending.

Revenue raisers to “pay for” the tax cuts may include a value-added tax (VAT). This will be another drag on growth. Business is delaying investment until tax write-off rules are clarified and avoiding loans until interest tax deduction rules are established. This combination of delayed investment and less borrowing will kill the capital expenditure component of GDP.

Then there is the real possibility of a government shutdown on April 28, when the current “continuing resolution,” or CR, that authorizes government spending expires.

If Congress cannot renew the CR due to infighting on peripheral issues, such as funding for Planned Parenthood, then the government will shut down. Since this is not priced into the stock market, it will come as a shock and possibly the catalyst for a stock market correction of 10% or more.

Once the stock market surveys this landscape of higher rates, slower growth, possible recession and government shutdown, it has nowhere to go but down. The Fed response to tighter financial conditions will be to ease those conditions, which will result in a weaker dollar, a stronger euro and much higher gold prices. An extra word about gold is in order here.

Janet Yellen’s Fed press conference on March 15 was interpreted as dovish and, therefore, bullish for gold. Gold was $1,195 just before the Fed meeting and has since rallied to $1,251 per ounce — a 4% gain in under two weeks.

The good news for gold investors is the Fed is not yet done helping gold. With the Fed tightening into economic weakness, the economy will hit stall speed by late June. Once that happens, the Fed will flip-flop to an easing posture (for the ninth time since May 2013), and gold will get another lift.

Finally, war may be imminent between the U.S. and North Korea.

That’s not hyperbole. The U.S. is determined to prevent North Korea from achieving the ability to deploy nuclear delivers systems that can strike the American west coast.

Three administrations spanning 24 years — Clinton, Bush 43 and Obama — have failed to deter North Korea’s nuclear ambitions. The problem is so long-standing and discouraging that markets have become complacent, as if North Korea were nothing more than background noise — annoying but ultimately harmless.

All of North Korea’s programs are leading to one thing: the ability to hit Los Angeles or another large U.S. city with a nuclear strike. Now the situation has become critical. North Korea has enough highly enriched uranium or plutonium for about 10 warheads. Its miniaturization and weaponization technology is well-advanced. Its missile tests have moved from short range to intermediate range, and are now on the brink of an intercontinental ballistic missile (ICBM).

Once a warhead is mounted on an ICBM, Los Angeles, San Francisco and Seattle are in imminent danger, to name a few.

North Korea is about three–four years away from this goal. Now the Trump administration has drawn a line in the sand and made it clear North Korea will not be allowed to carry out its plans. Either North Korea will desist or the U.S. will attack pre-emptively.

Markets are far too complacent about the prospects of war.

This is the calm before the storm. Political and economic uncertainty are set to return with a vengeance. Now is an excellent opportunity to take gains in stocks and reallocate to 10-year Treasury notes, cash, gold and euros — all of which are set to rally by summer.