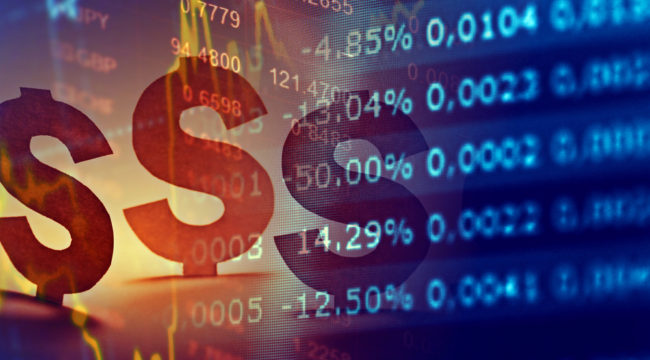 Cognitive dissonance is a psychological term to describe a situation where perception and reality are out of sync.

It’s similar to what most people refer to as “denial.” The patient sees things one way, but the reality is different. Of course, it’s just a matter of time before reality prevails and the patient is jolted back to reality. This process can be fast or slow, easy or painful, but the important thing to bear in mind is reality always wins.

Something like cognitive dissonance is going on in markets right now. Markets have been temporarily euphoric over Trump’s tax, regulatory and spending policies. Those policies are important to business and credit cycles and economic growth.

The perception is that happy days are here again. The new Trump administration is expected to pour trillions of dollars of stimulus spending and tax cuts into the economy. Immediately after the Nov. 8 election, investors took a quick look at Trump’s policies and decided they liked what they saw.

And indeed, the major stock indexes hit one record closing after another. The Dow topped 20,000 this week before pulling back. The dollar has been trading near a 14-year high, although it’s slipped in recent days. Gold was moving mostly sideways until it broke out again over the past few days.

Reality is another matter. I’ve been warning my readers lately that the Trump trade is levitating in thin air and is ready for a fall. Now that reality could be beginning to sink in.

It’s far from clear how much of the Trump economic agenda will see the light of day. Congress wants to offset tax cuts in one area with tax increases in another so they are “revenue neutral.” That takes away the stimulus. Less regulation for banks won’t help the economy if bankers lead us into another financial meltdown like 2008.

Infrastructure spending will increase the debt-to-GDP ratio past the already high level of 105%, putting the U.S. closer to a sovereign debt crisis like Greece. As I wrote Tuesday, many believe a 60% debt-to-GDP ratio retards growth. That’s the standard the ECB uses for members of the Eurozone. Scholars Ken Rogoff and Carmen Reinhart put the figure at 90%.

Again, the U.S. debt-to-GDP ratio is currently at 105%, as stated, and heading higher. Under any standard, the U.S. is at the point where more debt produces less growth rather than more. This is one more reason why the Trump infrastructure spending plan will not produce the hoped for growth. And if infrastructure is funded privately, you’ll need tools and user fees to pay the bondholders, which is just another form of tax increase.

There’s almost no way Trump’s policies can supply the stimulus the market is pricing in. The Dow Jones index peaked on Jan. 26, 2017, one day after cracking the mythical 20,000 mark. It’s now trading around 19,900. The downhill trend may continue and get steeper soon.

Productivity has stalled out in recent months. Economists are not sure why. It could be due to lack of investment by business, or that workers are not being trained in useful skills, or that everyone is spending too much time on social media. Whatever the cause, productivity is flat.

Fourth-quarter GDP came in at 1.9%, below expectations — the final chapter on the worst year of U.S. growth since 2011 when the economy was still healing from the global financial crisis. The strong dollar is a major headwind to growth, along with flat labor force participation and weak productivity growth.

Growth in a major economy is simply the sum of increases in the labor force plus increases in productivity. Think about it. How many people are working and what is the output per worker? That’s it; that’s all there is. The reality is that the workforce is not growing.

Labor force participation is near 40-year lows and is expected to decline further for demographic reasons. Birthrates have never been this low since the Great Depression. The U.S. used to get a labor force lift from immigration, but that might dry up because of Trump’s policies. We’ll have to wait and see.

How will this situation be resolved?

Either growth will rebound based on “animal spirits” and the Trump stimulus working better than expected or markets will collapse once they realize the growth is not coming. By “collapse,” I mean a violent stock market correction, a falling dollar and major rallies in bonds and gold. We expect the latter.

Financial crises are not mainly about the business cycle. They’re about investor psychology, sudden shocks and the instability of the financial system. Right now investors are skittish, numerous shocks are waiting to happen and the system is highly unstable due to overleverage and nontransparency.

Despite Trump’s best efforts and positive policies, a collapse could happen any day unless radical steps are taken to prevent it — such as breaking up big banks and banning derivatives. I’ve been warning about this for a while, but now mainstream economists see the danger too. Nobel Prize winner Robert Shiller, for example, sees a stock market crash coming that could be worse than 1929 or 2000. I hope he’s wrong.

The problem with a financial panic is that panicked investors don’t care if the president is a Democrat or a Republican; they just want their money back. The same dynamic applies to natural disasters like tsunamis and earthquakes.

Once the disaster starts, the dynamics have a life of their own and don’t care if the victims are liberals or conservatives. Everyone gets hurt just the same. I’m not hoping for it, but this is a lesson Trump may learn the hard way.

Above I said collapse means a violent stock market correction, a falling dollar and major rallies in bonds and gold. I expect the latter. The long-term trends favor gold if U.S. growth continues disappoint.

The strong dollar story can’t last, so it won’t. The Trump administration has clearly signaled that the day of the strong dollar is over. When you see a coordinated attack on the dollar from the White House, the Treasury and the Fed, you can bet the dollar will weaken. That means a higher dollar price for gold.

The dollar may get one last boost from a Fed rate hike in March, but after that, even the Fed will acknowledge that they got it wrong again and start another easing cycle with happy talk and forward guidance.

For now, investors should not stand in front of a moving train. Keep cash ready and be prepared to move into gold, bonds and the euro. In fact, it’s not too soon to leg into those positions now.

Instead of watching the tape or short-term trends, my advice is to stay focused on the long-term trends. That’s how you’ll make the most money and preserve wealth in adversity.Regards,