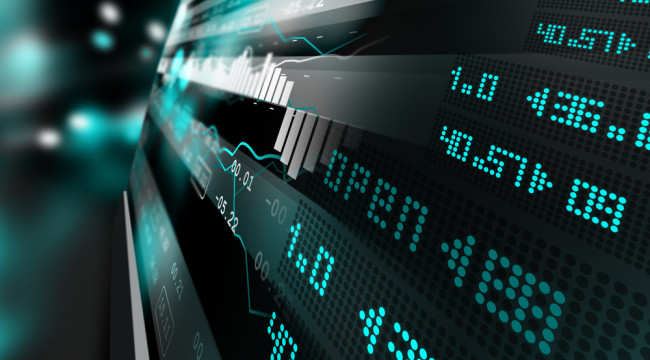 GUALFIN, Argentina – Our recently retired ranch manager, Jorge, came up on Saturday. So, we organized a party for him.

More about that tomorrow…

Today, we turn our attention back to the shabby world of money… and to a big decision we’ve made about our own finances.

As you may know, we just made a deal with longtime friend and star analyst Chris Mayer. [Watch Bill explain why here.]

I say “star” because over the past 10 years, Chris’s recommended portfolio has outperformed the best billionaire money managers.

We had an independent CPA examine the track record of Chris’s Capital & Crisis newsletter (which he no longer edits).

As you can see below, against even the best investors in the world – guys like Warren Buffett, Carl Icahn, and David Einhorn – that performance is remarkable. 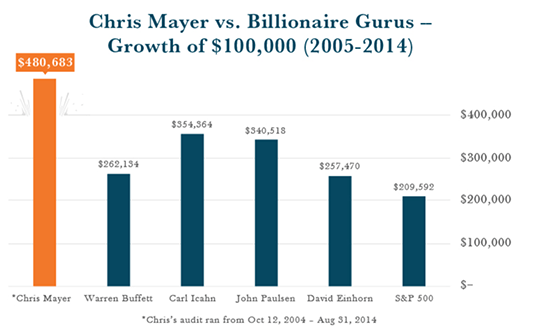 Our deal with Chris works as follows…

Chris will pick stocks using his own methods. We will follow.

We had mixed feelings about it…

We have great faith in Chris. But we don’t like investing in stocks.

When you “invest” in a ranch in Argentina, you make no money… but at least you enjoy yourself.

You meet new and interesting people. You confront new challenges. You learn things you didn’t know.

Stocks give us no such pleasure. Never once has a stock said so much as “hello,” no matter how much money we put into it.

Also, we believe this is the worst time to invest in the stock market in the last eight years – for the many reasons we’ve discussed in the Diary.

For the record, we still expect U.S. stocks to perform badly in 2016… and beyond.

But the guiding principle of the Diary is doubt…

Chris has made a lot of money for his readers over the last decade – through good times and bad. Our investments ­– heavy with gold, cash and real estate – did less well.

The next decade could go either way.

We’ll stick with our big positions in gold, cash, and real estate. But… bowing to doubt… we’ll hedge our bets, too, with stocks.

And some you do just for the hell of it…

We’re not sure which category to put this in. If Chris does anywhere near as well as he has for the last 10 years, we will say we did it for the money. If we lose money, we’ll say we were right about stocks all along.

Like everyone else, we’ve read many books on investing. We’ve followed the debates between proponents of the Efficient Market Hypothesis (who claim you can’t make outsized returns as an investor without taking outsized risks) and their critics.

We’ve studied the evidence and looked at the results. But all of this “book learning” has been overshadowed by what we have learned from running our own business.

In the stock market, you make money by finding good businesses… and sticking with them.

The problem is it’s hard to know what a good business is.

Coca-Cola is a good business. It has a product that costs little to make. And people like it. Many are almost addicted to it.

But there are plenty of carbonated drinks around; new ones come along every day. So it is not obvious why Coke should be a winner.

That’s why people usually can’t tell how good a business is, even when they are right in the middle of it.

In 1888, for example, Asa Candler bought the formula for Coca-Cola from its inventor, John Pemberton, and other shareholders for just $550.

And in 1961, the McDonald brothers – Richard and Maurice – sold their fast-food sandwich shops to Ray Kroc for $2.7 million.

If founders and owners don’t know what their businesses are worth, how can outside investors?

Most of the time, the answer is: They can’t.

This bet still has two years to run. But so far, Buffett is winning by a large margin. The S&P 500 is up by about 65%… versus the roughly 22% average gain for the five hedge funds Protege Partners selected.

If the hot shots running hedge funds can’t beat the indexes, who can?

All we know for sure is that Chris Mayer has. He’s beaten the big money managers, and the S&P 500, over the last 10 years – by a wide margin.

Will he do so over the next 10 years?

As the SEC reminds us, past performance is no guarantee of future performance. Still, it’s all we have to go on.

One of the things Chris does to shift the odds in his favor: He pays attention to the people running the business.

Again, from our own experience, there are a lot of people running businesses who are more interested in their careers and their compensation than the health of the business itself.

Especially, now… and thanks largely to the corruption of the entire system wrought by today’s credit-based money… managers and investors tend to be very short-term oriented.

But real growth and real profits are rarely produced quickly.

Businesses are best understood as learning, not money-making, machines. The ones that succeed are the ones that learn more quickly – at low cost… by trial and error… over a long time.

Try to goose up profits in the short run and, most often, you cut off long-term learning.

That’s why companies bought and sold by professional investors, funds, or private equity firms are almost always a disaster. These predators strip out real assets, load up the company with debt, and then try to sell the husk of the company to unsuspecting investors.

That’s why Chris favors businesses where the operator has his heart in it. He will do what he has to do to help his business succeed.

Again, it’s no guarantee. But it’s a small edge.

Chris (who started his career as a loan officer in a bank) also spends a long time studying company reports and adding up the numbers.

Often, he finds they don’t add up at all. This doesn’t necessarily put him onto winners… but it helps him eliminate the losers.

We’ve known Chris for years. We trust him to pick stocks as much as I trust anyone.

Does this mean we will make money following his advice?

We don’t know. But we’re going to find out. And you are, too…

We’re making our own bet – five times as big as Warren’s.

We’re betting that Chris can not only beat the S&P 500… but also that he can keep us from losing a lot of money, even if the market turns down.