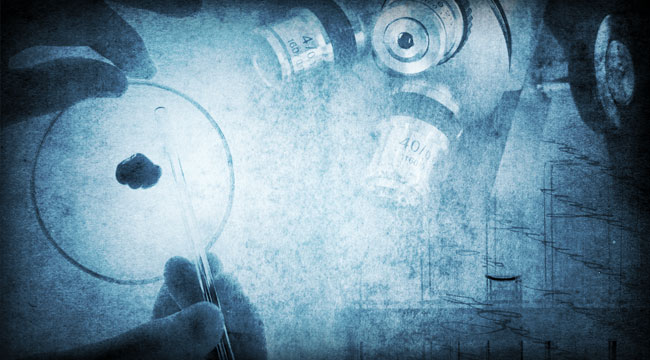 “Eugenics, a ‘breeding science’ that purported to select and preserve ‘desirable human traits’ was adopted by Hitler,” write Juan Enriquez and Steve Gullans in their provocative new book Evolving Ourselves, How Unnatural Selection and Nonrandom Mutation Are Changing Life on Earth, “but it’s not German-bred and -born. It was birthed by Darwin’s cousin, Francis Galton. Then it was lovingly nurtured at Stanford University, Cold Spring Harbor and the Carnegie Institution.”

Midway through the book, Enriquez and Gullans take a break from explaining how the technology we currently possess can help shape the new human genetic landscape to ask a few ethical questions… Just because we can edit genes now, does that mean we should?

“In Indiana, in 1907, way before the Nazis, eugenicist Harry Laughlin wrote model laws for sterilization of ‘the inferior’ and those ‘misfit to reproduce,’ Soon, 33 U.S. states were making sure that thousands of people they considered ‘socially inadequate,’ plus those who were maintained ‘wholly or partly by public expense,’ had no kids.”

We’ve been passing Evolving Ourselves around the Daily Reckoning HQ for several weeks now. Partly because we’ve known Juan Enriquez for going on a decade now. And partly because many of the ideas he and Steve Gullans are writing about are as provocative and challenging as our own investigation into “gene editing” and the life science revolution — a project, you may recall, we dubbed “Heaven’s Been Robbed.”

“State governments could and did take control,” Enriquez and Gullans go on, “of the bodies and reproductive organs of anyone they deemed ‘feebleminded, insane, criminalistic, epileptic, inebriate, diseased, blind, deaf, deformed and dependent.’ And for good measure, they also threw in ‘orphans, ne’er-do-wells, tramps, the homeless and paupers.’” That’s quite a list. Not a soul on the Daily Reckoning staff would pass through such scrutiny unscathed!

“The Nazis thanked Laughlin with and honorary Ph.D. for ‘science of social cleansing’ in 1936 and then celebrated his accomplishments by sterilizing 350,000 people.”

“Despite all evidence of harm, many within the United States didn’t learn from this history and they continued sterilizing the mentally handicapped through the 1970s. Until 1977, in South Carolina, social workers were officially deputized to decide whether a person should ever be permitted to have children. The last forced sterilization in the United States? Oregon, 1981. Because billions of people have been judged, oppressed or categorized as superior or inferior based on skin color, income, gender, national origin and so on, the default position taken by most geneticists is: We are all equal, period.”

We first met Juan while studying government debt (of course, what else?) and financing of breakthrough technologies. We were fascinated by the story of two guys who lined up the private funds to map the human genome, pitting their project against a litany of governments, university and private endowments who’d secured billions of dollars in grants over a 20-year period to do the same.

Juan Enriquez and the now-renowned entrepreneur Craig Venter were those two guys. Their project, based not far our office here in Maryland, mapped the first straight of human DNA not in 20 years… but less than 20 months.

For good measure, Enriquez and Venter mapped the second strand of human genome roughly six months later. Oh, how the government grant writers, university science chairs and “nonprofit” endowment do-gooders were miffed! Many a cushy, tenured career path was upset, derailed and overturned by two relatively unassuming ne’er-do-wells… who had the gumption to think entrepreneurs have a role in science.

Not that Enriquez hadn’t been around the block a few times already:

“I’ve had the unlikeliest of careers. I started out thinking that maybe I’d be an academic and teach at Harvard’s Business School. I was on the right track when I received an invitation to Mexico and run the Urban Development Corp. in Mexico City. That was a spectacular job, because it was one of the biggest cities in the world, and I was in charge of figuring out how to transform that economy from a protectionist economy that’s based on import substitution into a modern economy.

“So I built the most modern part of Mexico City: an entire tech city, the country’s first fiber-optic wired space. It was the first large university expansion, hospital expansions, headquarters for most of the Latin American headquarters of large U.S. companies and global companies. I built the National Zoo; I built the National Children’s Museum, which is the most visited museum in the world; I built the most successful cultural center in Latin America for music and dance and theater and art, a little bit like Kennedy Center. I built public housing. It was just a fantastic job. The best part? It was a ‘for profit’ corporation. We made money. We paid taxes.”

Unfortunately, like all good things, there came a point in Mexico where it became politically impossible to continue the projects he’d been working on.

“You can build a lot of stuff in a short amount of time in a Mexico City… in a Singapore, Korea or Taiwan, Brazil… when there’s a will, when there’s a clear purpose, when there’s transparency and honesty and when regulation is reasonable.”

But when the transparency clouds, the honesty becomes suspect and regulation becomes unbearable, when you’re no longer able to build, what happens? You go somewhere else.

When the project in Mexico ended, Juan returned to Harvard and studied why countries appear and disappear, why countries are successful. He worked with governments and businesses throughout the world putting together development strategies.

Says Juan, describing what he learned to me during one of a series interviews we conducted with him:

“When you look at what’s building the U.S. economy and U.S. jobs, about 0.02% of the U.S. economy goes into venture-backed startups, but those startups are about 11% of U.S. jobs and about 21% of total economic output, because that’s where you get your Intels, your Hewlett-Packards, your eBays, your Teslas, all of these things that provide jobs.

“That group tries to make sure that nothing changes, and when an entrepreneur shows up, the either buy the person out or they crush him or her. How do we get that balance right? Whether the entrepreneurs that are in your writings [and the companies we research] survive or don’t survive is the difference between the U.S. being a vibrant, growing economy that can get out from under the debt it’s building up… or not.”

About the time we were sitting down, the President had given a speech about the government’s ability to deliver on its perennially vacuous promise to create jobs. “Can government create jobs?” we wanted to know Juan’s point of view. It’s a long-held view here in the pages of The Daily Reckoning that most of the jobs are created by new businesses, new enterprises… by entrepreneurs. Government can shift piles of money around. It’s foolish for the president, any president or politician to stand up in front of an audience and promise that he can “create” jobs.

“Can government create jobs?” we asked. “It’s a basic question. What can they do in lieu of putting people to work digging ditches, filing papers or forcing citizens to comply with its regulations?”

“There’s absolutely a side-by-side role for government and entrepreneurs,” Juan responded. Having built a career helping new discoveries, medical therapies and drugs migrate from the lab to use in hospitals and pharmacy shelves, you’d hardly expect a different answer. “Government and entrepreneurs each have to fulfill their roles, and their roles have to be very clear.”

Juan breaks it down in this way:

“A society that allows its government to usurp or impede entrepreneurs is one in which it is very hard to change and build the next great new thing.”

When Juan became interested in technology, he began an intense study of genomics and life sciences. He learned the field well enough to publish some leading-edge books and articles, started the Harvard Business School Life Science Project and then “got itchy” to build again. “There are a bunch of ideas here,” he said to himself at the time. “Let’s go build some world-changing industries.”

Fortunately, for you, he found some partners who were a lot smarter than he was. He put together, as he puts it, a “little nerd venture firm”… including the head of chemistry from Yale, the guy who’d overseen the doctoral programs at Harvard Med and a medical school professor who founded the Boston Consulting Group spinout in health care.

That firm, Excel Venture Management, has been on a quest looking for the smartest entrepreneurs in the world who will create the next industries… the new entrepreneurs in the life science revolution. They have been looking for ideas that will “potentially become as large as the entire biotech sector… or that will be the equivalent of the entire computer chip sector.”

Fortunately, there’s no shortage of those folks running around.

More from Juan on Monday…

Addison Wiggin
for the Daily Reckoning

P.S. Several years ago, when we were searching for a qualified writer to cover the “life science revolution” on your behalf, we asked Juan for a recommendation. Without hesitation, Juan recommended Stephen Petranek and forwarded an introduction. Stephen’s own impressive arm-length resume includes a decade-long stint as editor-in-chief of the science magazine, Discover, once a pet project of Disney’s Michael Eisner. He’s also given several provocative TED talks. When you click here, Stephen traces back cancer cures to “the dawn of iCells”…