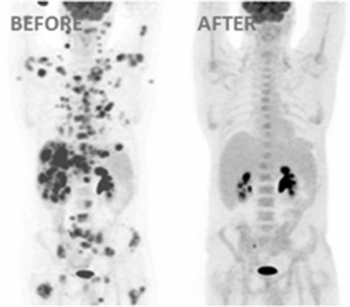 For the first time in my adult life, I am actually optimistic we may be looking at a cure for cancer. Not a treatment, but an actual cure. And that’s just part of what promises to be the most exciting advance in all the history of medicine.

Millions of people will soon have the tools they need to live longer, healthier and happier. The companies behind these miracles will soar. Everyone who had the courage to support these breakthrough ideas in their earliest stages will be enriched.

In fact, the company developing the cancer cure has already racked up some impressive gains thanks to hitting important milestones. Now it’s gearing up for its next steps.

While I don’t want to oversell the opportunity, I am convinced the company’s next moves could conceivably send the stock much higher.

But what’s most impressive to me is the “secret” behind this entire medical revolution. It’s actually nothing more than enhancing something that has acted as our best defense against disease for millions of years — our own bodies.

Our immune systems carry all the medicine we need to ward off cancer, germs, viruses and a host of other diseases that can kill us.

Consider someone who doesn’t get Ebola when exposed to it. Such people are said to be “immune” to the disease. They carry antibodies in their blood that can identify Ebola and kill it before it overwhelms them. A study of about 4,000 people in Gabon a few years ago found that an average of 15% of people there had antibodies for Ebola. If your immune system is primed, it can keep you free from even the most deadly diseases in the world.

Or perhaps you have met someone who was cured of an incurable cancer. I knew a woman whose lungs were full of tumors. Her doctors stopped her chemo treatments and told her to make hospice arrangements. Five years later, no one could find any evidence she had ever had lung cancer. Chemotherapy can’t do that. Her immune system had somehow finally figured out who the bad guys were and attacked them.

It’s an extraordinary system, but it isn’t perfect. Some diseases, like cancer, have evolved strategies to hide from our killer immune system cells. For example, cancer tumor cells can coat themselves with fats that look normal to the immune system.

And that isn’t the only problem. Sometimes our immune systems can go haywire and attack healthy and natural cells in our bodies instead of invaders. Rheumatoid arthritis, a debilitating disease, is caused by the immune system attacking healthy cells — in this case, the linings of joints.

The answer lies in our antibodies. These simple proteins are designed to attach to anything foreign. When one is attached to a cell, that cell suddenly carries a big red flag saying “kill me.” Immune system macrophages, T cells and killer cells will see the flag and go to work.

Discovering how to prevent the immune system from attacking the body could lead to dozens of cures for common autoimmune diseases. I’m talking about things like diabetes, multiple sclerosis, Hashimoto’s, celiac disease, cystic fibrosis, arthritis and more.

At the other end of the spectrum is to figure out how to get the immune system to identify cancerous cells. Part of the problem with cancer is that tumor cells are made up of normal cells from your body that have started dividing without end. Those cells are not perceived as invaders because they contain your DNA.

About 40 years ago, two researchers who went on to win Nobel Prizes figured out that those antibody markers could be produced in a laboratory. Ever since then, with growing but always with limited success, scientists have been making antibodies and trying to use them as medicine.

Even five years ago, immunotherapy seemed to be more theory than therapy. Then in 2011, a researcher at the University of California Berkeley who had been trying to defeat melanomas with engineered antibodies came up with an antibody system that was rushed through by the FDA. It was a breakthrough. And by 2013, the prestigious journal Science had designated immunotherapy as the breakthrough of the year.

This is all part of a field that I have followed for years, because it just makes sense that no medicine is likely to do as well as the human immune system, which has evolved over 2 million years to combat anything nature can throw at us.

These days, immunotherapy is so hot that every major drug company is trying to develop therapies based on it. There is a mad scramble to be in this game, and it seems like almost any new startup that declares it is working on immune system antibodies for cancers becomes a hot stock.

Each one has a unique approach to creating antibodies, and it’s doubtful that most will succeed. Those that are on the right path will sort themselves out quickly. In this game, longevity and experience count.

One company stands out among all the rest. It was the first group of researchers — back in 2008, a year before it was actually formed as a company — to begin immunotherapy against cancer by re-engineering the immune system.

But wait a minute. Hasn’t every attempt in the world of immunology, going all the way back to Interferon, been something of a failure?

Well, one look at the before and after CAT scans of a patient previously riddled with cancer who has been given this company’s immunotherapy and you will be struck with awe. 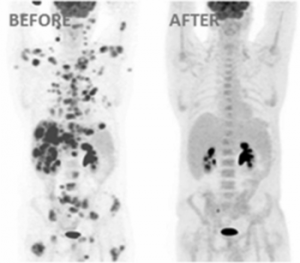 This 47-year-old patient had more than 70 non-Hodgkin tumors revealed in a scan before being treated with engineered immune system T cells. Two weeks later, the patient was in remission (the black blobs pictured right are normal).

Suddenly there are at least seven other companies trying to replicate this, but none of them, not even mega-giant Novartis, has succeeded in recruiting the best and brightest in the field of immunology to join their team the way the company, including the pioneers of immune therapy that go back three decades to the beginning of the field.

Stephen Petranek
for the Daily Reckoning

P.P.S. The biggest causes of death have always been part of the aging process. If you live long enough, you will develop a cancer. The longer you live, the more likely you are to develop heart disease, stroke, osteoporosis and Alzheimer’s, to list only a few.

That may seem like the normal inevitable fact of human existence, but it is not normal or inevitable to scientists and researchers. Aging is caused by genetic triggers in the human body, so scientists have long speculated that figuring out which genes cause aging could lead to much longer lives, if not an aging process that approaches immortality.

The problem has been that it looks like many genes are involved in aging, and the complex interplay between them and other environmental factors is so difficult to untangle that we may be far from anything approaching a fountain of youth.

Until recently, that is. On April 30, researchers at the Salk Institute for Biological Studies and the Chinese Academy of Sciences announced they found a shortcut in research that reveals the key driver in the aging process. The shortcut was to study a strange disease called Werner syndrome, which rapidly and prematurely ages the body.

The Salk study may be the clearest, most direct leap in understanding aging in the history of medical research and opens extraordinary possibilities for slowing down or even halting the aging process in humans.