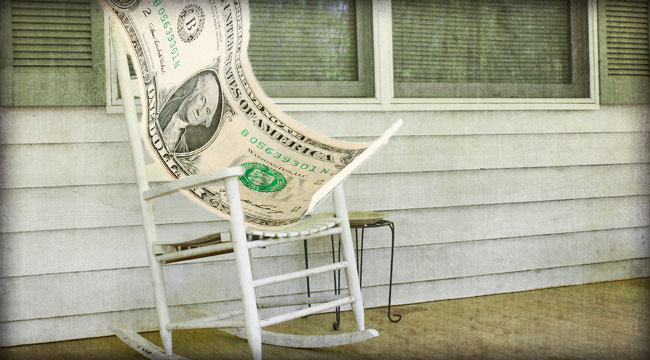 In case you haven’t guessed, the U.S. is on the other side of a massive spending peak that doesn’t hit a trough until 2016-17. At that point, there is a surge again. Harry Dent, though, who we’ve been writing about over the past few days, is a pretty bearish fellow. As I noted in my essay “A Reasonable Way to Predict the Future” from yesterday, Harry Dent — author, newsletter writer, forecaster of market trends — watches demographics. And he notes there are spending peaks all over the world. After hitting a peak, economies get sleepy.

At the recent Liberty Forum in St. Kitts Harry showed attendees a table called “Demographic Cliffs Around the World.” Take a look. It is hard to miss the ominous 2007 date for the U.S. We’re still in the soft years, demographically speaking. 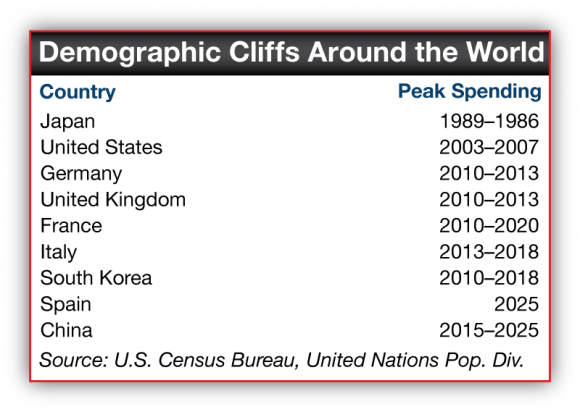 “This is a fact,” Harry said. “This isn’t a theory. People earn and spend more money when they enter the workforce and the peak is 46… They don’t peak because they run out of money. They peak because their kids get out of school. Spending then goes down. Don’t you think this would have dramatic effect [on the economy]?”

The audience nodded affirmatively. Harry is persuasive. Whether anyone can really make any money with this stuff, I’m not so sure. But it seems helpful to have demographics in your favor at least. Senior housing, life insurance and cruise ships — these things face pleasant odds at the demographic craps table.

As people spend less, they also borrow less. This was kind of part two of Harry’s talk, which focused on the fall in debt levels since the peak in 2007. “When debt bubbles burst,” Harry said, “there is deflation every single time, no exceptions. Debt creates money. And when it is written off or falls, you’re destroying money.”

This is the classic argument put forward by the deflationist crowd. Deflation, in this context, means prices overall are falling. Interest rates, too, tend to dawdle or fall. To their credit, the deflation crowd has been more or less right since 2008; at least, more so than the “government is printing money and there will be inflation” crowd. At least so far.

The deflationists have two heavyweight examples in their stable. The first is the period between 1927 and 1939 in the U.S. And the second is Japan from 1989 to the present day. They are examples of the impotence of central banks in the face of a debt deflation.

“Japan has been doing QE [quantitative easing] for 17 years and they have zero inflation,” Harry said. In a similar way, since 2008, the Bernanke Fed also has yet to stoke inflation despite massive QE. The 10-year Treasury yields less than 3% and the gold price languishes.

Perhaps we’ll be the next Japan: a slow-growing economy with a lot of old people. Which may not be a bad thing — especially if you own senior housing, sell life insurance products and run a cruise ship. Well, we’ll see.

After the talk, people ambled outside, probably more confused than ever, blinking in the bright sun and fumbling for their sunglasses. Ah well, another rum punch and the world will make sense again.

I shrugged and headed for the pool. Some big questions have no answers worth even a used movie ticket. Life is that way. As for me, I’ll keep looking for cheap assets, owner-operators with good disclosures and excellent financial condition. A little demographic tail wind can’t hurt, though.

P.S. The bottom line is America is getting older. In fact, over 10,000 Americans will turn 65 years old every day over the next 15 years. As a result, the percentage of the population over 65 will move from about 14% to 20%. Living longer creates some obvious needs. For one thing, people need to be sure they won’t outlive their savings. Right now, that’s a big worry. So how to meet the need to save and grow a nest egg without taking risk? I answered that question in today’s Daily Reckoning email edition – and gave readers an outline of 4 plays that could safely transform their portfolios in retirement. This is just one perk of being a reader of the FREE Daily Reckoning email edition. Each issue also comes packed with additional market commentary at least 3 specific chances to discover real, actionable investment plays. Make sure you’re getting the full experience. Sign up for the FREE Daily Reckoning email edition, right here.