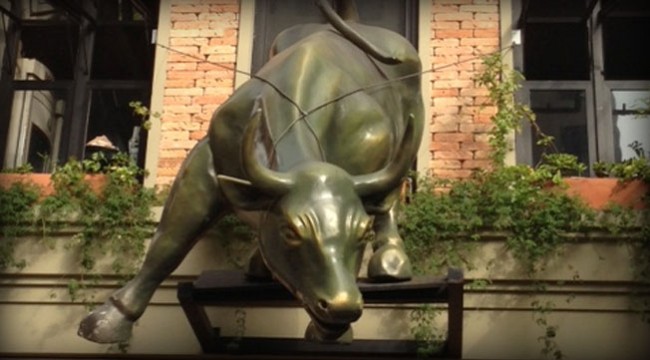 Investing in the spirit of Sextus Empiricus

We were on Rua Jeronimo da Veiga in Sao Paulo’s Itaim Bibi district, “the new financial district,” in town.

The Wall Street Bar sports a replica of the Merrill Lynch bull from Lower Manhattan above its doorway. “Inside, beers are priced based on their popularity at evening,” Rocky explained. Rocky Vega has been providing guidance in our new partnership with the local independent research firm Empiricus. Rocky is also adept at addressing our desire to sample the local fare wherever we happen to travel.

Says the bar’s website: “The Wall Street Bar concept is inspired by the international power and influence of New York City stock exchanges. An LCD ticker lining the walls registers the rising and falling popularity of the various beers by adjusting prices on tap. The future-forward establishment also allows you to select and order beer and music through touch-screen tabletop devices.”

“If a particular beer,” Rocky explains, “like Skol, the local favorite, is popular that night… the price goes up. Just like a stock does during the trading day.”

“Great. So are we going in?” we said walking toward the bull.

“No. This place is lame.” Apparently, the new systems don’t exactly work. The bar was empty.

We ended up in a local outdoor cafe with banana trees and various leafy tropical plants, Brazilian hostesses (ahem) and locally inspired cuisine.

Empiricus draws inspiration from their Greek philosophical namesake: Sextus Empiricus. “Sextus Empiricus is an ancient thinker,” says co-founder of the firm Rodolfo Amstalden. “He’s the father of the so-called philosophic school of skepticism. He’s always inquisitive about stuff. He views the world as empirical facts, much more reliable than Platonic theories. Empiricus deconstructs mainstream idealized fallacies through reality, plain and simple. That’s what we try to do with our financial research. The skepticism of Main Street while looking at Wall Street.

“We’re called Empiricus because we’re skeptical about the financial mainstream, and we’d rather have our feet on the ground of companies than our minds on theoretical spreadsheets.”

Boots on the ground. Proof of concept. Ready, fire, aim. These are strategic concepts we share. Who knew we’d find them expressed so well in Portuguese in South America? Rocky, apparently.

On a macro basis, Brazil seems like a good bet.

Growth in Brazil at twice the U.S. rate right now. Unemployment is a fairly solid 5%, compared with 7.6% in the U.S. (according to the BLS). Public debt run up by the Brazilian government is a fraction of what U.S. elected officials ignore on a daily basis in the United States.

The stock market in Brazil got whacked in 2008-09 like everywhere else. High-net-worth individuals actively engaged in managing their own money dropped 25%, from near 700,000 to just over half a million. Slowly over the past two years… 100,000 individual investors have crept back into the water.

We’ll continue to update you on what we discover here in Sao Paulo this week. For now, let’s return to the domestic UFC cage match between government bungling in public debt versus an explosion of cheap energy in the continent’s midsection.

“What if the Pentagon didn’t have to worry so much about Middle East oil?” says our own Byron King, on the scene in London, where the International Energy Agency (IEA) released their report promising U.S. energy independence as soon as 2030. Heh. “We’re finding out right now.”