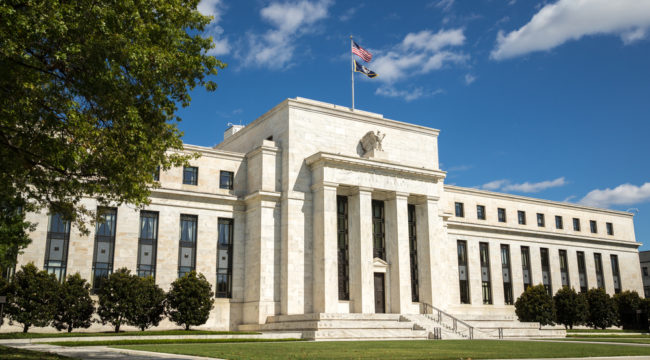 An Insider’s Insider to Advise the Fed

Sometimes the most important news is buried so deep it’s not even news. A certain story may be the most important market development by far, but if no one notices and no one understands the significance, it hardly qualifies as news.

We had an event like that last week. The most important financial story I have read in a long time went completely unnoticed. It was not reported in the mainstream media. You will not hear it discussed anywhere, you will not see it reported anywhere.

I’m talking about the news that Jon Faust will be a part-time advisor to new Fed chairman Jerome Powell.

Your first reaction upon reading this is probably, “Who’s Jon Faust, and why should we care if he’s advising the Fed?”

The answer is that Faust is an “insider’s insider” at the Fed. He’s the most powerful monetary expert that no one has ever heard of. He’s actually one of the top monetary economists in the world. Knowing Faust’s backstory is the key to knowing what Fed monetary policy will be going forward. 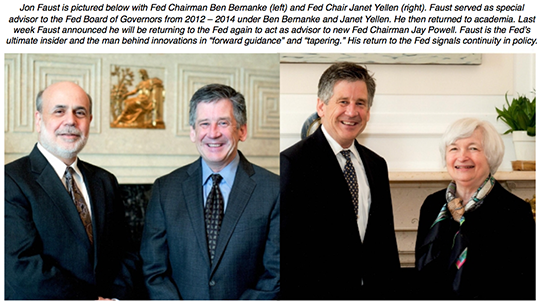 Faust is a monetary economist with a Ph.D. from the University of California, Berkeley, the same school where Janet Yellen taught for many years. Faust’s thesis adviser was Janet Yellen’s husband, the Nobel Prize winner George Akerlof. Few economists are as close to Yellen as Faust. The same is true of Bernanke, who holds Jon Faust in the highest regard.

From 1981–2006, Faust worked as a staff economist at the Federal Reserve Board in Washington, D.C., eventually rising to assistant director of the Division of International Finance. In 2006, Faust left the Fed to become director of the Center for Financial Economics, CFE, at Johns Hopkins University in Baltimore.

I was one of the original benefactors of CFE and in that capacity was involved along with others in recruiting Jon to join CFE from the Fed. He happens to be a friend of mine. I know him well. A long profile of my discussions and interactions with Jon over the years is found in Chapter Six of my most recent book, The Road to Ruin.

In 2012, Faust was named “special adviser” to the Federal Reserve Board at the request of then-Chairman Ben Bernanke. He remained in that role until August 2014, a period that covered the transition from Bernanke to the new Fed Chair Janet Yellen in February 2014.

Faust’s Fed tenure from 2012–2014 included critical developments such as the launch of QE3, implementation of the “taper” from 2013–2014 and preparation for the interest rate “liftoff,” which finally arrived in 2015 not long after Faust left.

Bernanke relied on Faust to manage market expectations (some might say “manipulate” expectations) through various communications channels. These channels include Fed statements, speeches by Fed governors, planted questions at press conferences, leaks to favored reporters (such as Jon Hilsenrath at The Wall Street Journal) and exquisite word choices such as “patient” to describe future Fed policy on rate hikes, all under the banner of “forward guidance.”

In order to carry out his communications duties, Faust had to be intimately involved with the creation of monetary policy itself. He was Bernanke’s brain if you want to think of it that way.

Bernanke confirmed this to me personally when I spoke to him in Seoul, South Korea, about Faust’s role. Incidentally, when Bernanke left and Yellen took over, Jon continued and he was Yellen’s brain.

Faust’s office was immediately adjacent to Bernanke’s and Yellen’s offices in the corridor leading from the Fed board room on the second floor of the Fed’s headquarters on Constitution Avenue in Washington, D.C.

Bernanke and I joked about the fact that the Fed recruited Faust away from CFE after I had helped recruit Faust from the Fed. Bernanke laughed and said, “Yes, but we gave him back to you.” True enough. In September 2014, Jon returned to CFE to resume his academic duties as director of the center.

Then last week, as noted above, Faust was tapped again by new Fed Chairman Jay Powell to return to Washington as his adviser. I got a communication from Jon at the time letting me know.

The significance of this announcement for monetary policy cannot be overstated. For one thing, Powell is not an economist; he’s a lawyer by training. This means he will be even more dependent on Faust’s advice than Bernanke or Yellen, both of whom are among the top monetary economists in the world. So now Jon’s going to be Jerome Powell’s brain and even more so, because Powell is not an economist.

More importantly, the return of Jon Faust means continuity with the policies of Bernanke and Yellen. This means “gradual” tightening of monetary policy, defined as 0.25% rate hikes every March, June, September and December until early 2020 unless one of several factors causes the Fed to take a “pause.” Those pause factors are job losses, disinflation or disorderly market declines.

There are many corollaries and addenda to this baseline scenario. These additional insights include the role of the “dots” in Fed decision making, the role of regional reserve bank presidents in policymaking, the need to deflate asset bubbles and the strike price on the “Fed put” when it comes to collapsing markets.

Aain, nobody is more of a Fed insider than Jon Faust. He’s not on the Board of Governors. He’s not the chairman or the vice chairman. But he’s the brains behind a lot of the messaging involving QE and now QT.

Jon Faust helped to create and implement these rules, exceptions and ancillary policies. He has explained all of them to me in private conversations over the years. I have added Jon’s advice to other insights I gained in my conversations with Fed governors, chairs and vice chairs, Fed economists and regional reserve bank presidents.

The good news is that the highly refined Fed forecasting models I have developed since 2013 will be valid for the foreseeable future. That’s going to make it just as easy to read the Fed.

We’re going to have enormous continuity. Jon Faust’s return to the Fed will make sure of that.