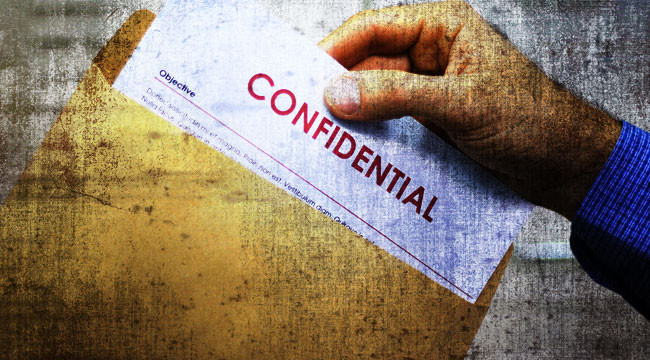 If You Have Nothing to Hide, Be Very Worried

Many people do not seem to mind the government peeping into their “metadata” or even into their emails, Internet habits, or phone calls. Mark Reid, the city manager of Bluffdale, Utah, where a large NSA data center is being built, doesn’t worry: “If someone reads my emails,”he says, “they’ll be pretty bored.”

He should think twice.

Other people might not have as boring a life as his. They may have legitimate reasons to keep prying eyes out. But even if their lives are boring, the Mark Reids of the world should still endeavor to keep them private.

The first reason why private information should remain private is that the state — the whole apparatus of government, all branches, all levels — has an incentive to use your information against you. There, as elsewhere, incentives matter.

But how do these incentives work? Assume that the state is nice and is entirely devoted to the welfare of its citizens. Similar to how parents are biologically driven to take care of their children. In this case, we can imagine any surveillance the angelic state carries out and any information it gathers will be used for the welfare of the people.

Obama implicitly adopts this angelic model of government. He’s not the only one in the political class who feels this way.  On Aug. 10, Obama proposed a minor, cosmetic reform of the NSA’s surveillance. He claimed that it is important for “the American people to have confidence” in the intelligence community. The message is: Trust the state.

We have good reasons to reject the angelic model of the state. “If men were angels,”wrote James Madison, “no government would be necessary.” He immediately added: “If angels were to govern men, neither external nor internal controls on government would be necessary.” A brief survey of today’s politicians will make it pretty clear that the state is not made of angels. Just meet some politicians and bureaucrats.

When we talk about the state’s incentives, we are referring to the incentives of these individuals. Public choice analysis is a field of economics that over the last half century has studied how these incentives work. To summarize, the incentives of government bureaucrats are to increase the sizes of their bureaus, because that’s how they get higher pay, better perks, and a greater sense of accomplishment. At the same time, politicians have the incentives to increase their power in order to satisfy the interests groups whose support they need to get elected or remain in power.

If we adopt this alternative model of the state instead of the angelic model, then we can understand why state power grows if not constrained from the outside. The American ideal — as in classical liberalism, or libertarianism, in the Western tradition — was to reinforce these constraints.

Lack of information is a useful constraint on government action. The less the state knows about individuals and their associations (including their business corporations), the less it is able to enforce its laws and regulations that are detrimental to liberty and prosperity.

Just imagine what would happen if, for example, official ID papers (Social Security numbers, passports, and driver’s licenses) did not exist. Imagine how difficult and costly it would be to enforce confiscatory taxation, financial regulations, gun controls, or travel bans (such as those for Edward Snowden). What would happen if the government did not have all the financial information listed corporations are forced to provide “regulators”? It would be much more difficult to enforce the current confiscatory corporate tax rates.

Some information in the hands of government is justifiable, but not the mass of data it now amasses. Without wholesale and continuous surveillance, murder and outright fraud could still be punished. Indeed, they were before the government knew so much about the activities of individuals and businesses.

With less tracking information, enforcement would be more costly, of course, but this is what we want if we don’t trust nonangelic governments. If laws and regulations were more costly to enforce, there would be fewer of them. The state would have to specialize in certain missions, focusing more on the protection of persons and property

If, on the other hand, information constraints on the state are weakened, the cost of enforcing laws and regulations will drop, and we’ll get more state power. This trend has been going on for several decades. Information about financial institutions and their customers has made possible monstrosities like money laundering and civil forfeiture laws. Surveillance of health made the eugenics movement possible in 30 states. In North Carolina alone, 7,600 individuals were sterilized from 1929-74. Government ID papers have made checkpoints more productive and less costly.

Saying that some government activities have to be more costly is the same as saying they should be constrained. ID verifications must be more expensive so that government agents carry them out in only exceptional circumstances, when it is really worth it. It is only by constraining the state that we can preserve liberty. If you don’t want random police checks, don’t make them easy to do.

The problem is the same with DNA databases. James Watson, winner of a Nobel Prize for his work on the structure of DNA, argues for compulsory DNA fingerprinting. He claims that it would only “take away from our liberty to commit crime.” The problem is that it would also make it easier for the state to enforce unacceptable laws, both current and future.

Decrease the cost of enforcing laws and regulations and you will get more of them. If the state knew more about the dull lives of all the Mark Reids of the world, it would be able to enforce this dullness more easily on more people.

There is a second reason why private information must stay private. It is simply that you may well be breaking criminal laws without knowing it. There are so many new and complicated laws that many people are not convicted felons only because the government does not know which paper crimes they have committed.

Some surveillance of suspected terrorists is necessary. But on Sept. 10, 2001, the U.S. government already had more surveillance power and information than is compatible with a free society.

The main problem with the surveillance state is not what it knows, but what it is does with what it knows. What it does with its mountain of information is control people ever more tightly. If you think you have nothing to hide and let the state look into your life, you’ll soon find out that you do have much to hide.

Byron King reports on the CTIIC, it’s slow shift towards a three-letter government agency and the money to be made as it does…