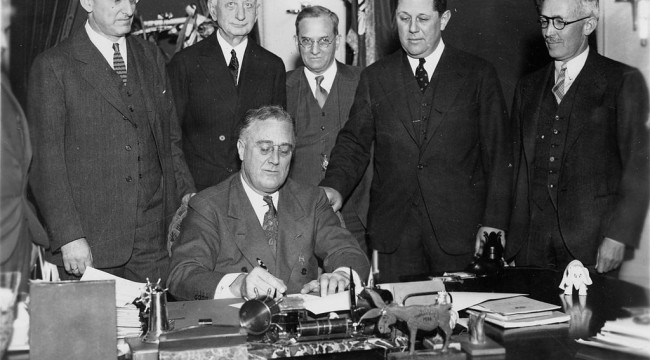 How Inflation Could Be Caused in 15 Minutes

One of the conundrums of monetary policy over the past eight years is the Federal Reserve’s failure to cause inflation. This sounds strange to most. People associate inflation with misguided monetary policy by central banks, especially the Fed.

So-called “money printing” is seen as a certain path to inflation. The Fed has printed almost $4 trillion since 2008. Yet inflation (at least as measured by official statistics) is barely noticeable.

With so much money around, where’s the inflation?

In fact, the private sector on the whole was deleveraging — selling off assets and paying off debt — even as public debt expanded. The speed at which consumers spend money (technically called velocity) hasn’t accelerated.

From 1996-2008, it increased at a steady pace, exactly as Milton Friedman and other monetarists had recommended since the 1970s.

Beginning in 2008, the money supply “went vertical” with three successive quantitative easing (QE) programs of money printing. These were QE1, QE2 and QE3.

Increased money supply alone does not cause inflation. The money must be borrowed and spent. The absence of lending and spending (declining velocity) is one reason disinflation and deflation have been more prevalent than inflation.

The second reason for the absence of inflation is that the world has been confronting powerful deflationary headwinds, principally demographics and technology. The rate of increase of global population peaked in 1995. Today populations are in decline in Japan, Russia and Europe. They are also stagnant elsewhere outside of Africa and the Middle East.

Fewer people means less aggregate demand for goods and services. Improved technology and efficiencies from predictive analytics have lowered the cost of everything from inventories to transportation. This combination of less demand and greater efficiency results in lower prices.

The final reason is globalization.

The ability of global corporations to locate factories and obtain resources anywhere in the world has expanded the pool of available labor.

Global supply chains and advanced logistics mean that products like smartphones are created with U.S. technology, German screens, Korean semiconductors and Chinese assembly. The phones are then sold from India to Iceland and beyond. Yet many of the workers are paid little for their value-added in these global supply chains.

These deflationary tendencies create a major policy problem for the Fed. Governments need to cause inflation in order to reduce the real value of government debt. Inflation also increases nominal (if not real) incomes. These nominal increases can be taxed.

Persistent deflation will increase the value of debt and decrease tax revenues in ways that can cause governments to go bankrupt. Governments are therefore champions of inflation and rely on central banks to cause it.

In the past eight years, the Fed has tried every trick in the book to cause inflation. They have lowered rates, printed money, engaged in currency wars, used “forward guidance” (promises not to raise rates in the future), implemented “Operation Twist” and used nominal GDP targets. All of these methods have failed.

The Fed then shot itself in the foot by tapering asset purchases, removing forward guidance and raising rates. These tightening moves made the dollar stronger and increased deflationary forces even as the Fed claimed it wanted more inflation. Now it plans to start shrinking its massive balance sheet next month.

This tightening episode is proof (not that any was needed) that the Fed does not understand the dynamic deflationary forces it is now confronting. My expectation is that the Fed will soon reverse course and return to some form of easing.

A central bank’s worst nightmare is when they want inflation and can’t get it. The Fed’s tricks have all failed. Is there another rabbit in the hat?

The Fed can cause massive inflation in 15 minutes. They can call a board meeting, vote on a new policy, walk outside and announce to the world that effective immediately, the price of gold is $5,000 per ounce.

They will print money when they buy and reduce the money supply when they sell via the banks. This is exactly what the Fed does today in the bond market when they pursue QE. The Fed would simply substitute gold for bonds in their dealings. The Fed would target the gold price rather than interest rates.

Of course, the point of $5,000 gold is not to reward gold investors. The point is to cause a generalized increase in the price level. A rise in the price of gold from $1,000 per ounce to $5,000 per ounce is really an 80% devaluation of the dollar when measured in the quantity of gold that one dollar can buy.

This 80% devaluation of the dollar against gold will cause all other dollar prices to rise also. Oil would be $400 per barrel, gas would be $10.00 per gallon at the pump and so on. There it is — massive inflation in 15 minutes: the time it takes to vote on the new policy.

Don’t think this is possible? It has happened in the U.S. twice in the past 80 years. You may even know some people who lived through both episodes.

The first time was in 1933 when President Franklin Roosevelt ordered an increase in the gold price from $20.67 per ounce to $35.00 per ounce, nearly a 75% rise in the dollar price of gold. He did this to break the deflation of the Great Depression, and it worked. The economy grew strongly from 1934-36.

The second time was in the 1970s when President Richard Nixon ended the conversion of dollars into gold by U.S. trading partners. Nixon did not want inflation, but he got it.

History also shows that gold not only goes up in inflation (the 1970s), but it also goes up in deflation (the 1930s). When deflation runs out of control, as it did in the 1930s and may again, the government will raise the price of gold to break the back of deflation. They have to — otherwise, deflation will bankrupt the country.

Do I expect deflation to run out of control soon? Actually, no. Deflation is a strong force now, but I expect that eventually the Fed will get the inflation they want — probably through forward guidance, currency wars and negative interest rates.

When that happens, gold will go up.

Still, if deflation does get the upper hand, gold will also go up if the Fed raises the price of gold to devalue the dollar when all else fails.

This makes gold the ultimate “all weather” asset class. Gold goes up in extreme inflation and extreme deflation. Very few asset classes work well in both states of the world.

Since both inflation and deflation are possibilities today, gold belongs in every portfolio as protection against these extremes.