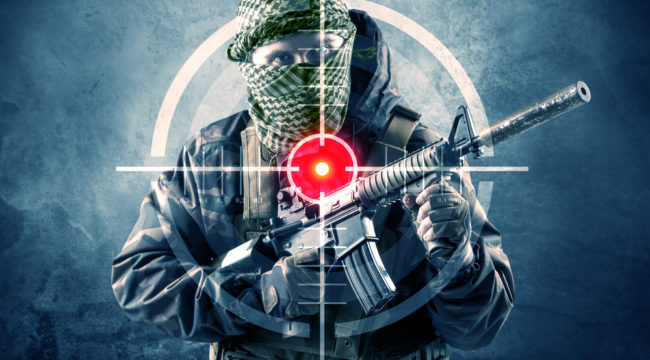 On the campaign trail, Trump blustered he’d “bomb the s**t out of” ISIS if elected.

He’s already made good on plenty of campaign promises. And he could soon make good on this one too…

On Jan. 28, President Trump directed the brass to brainstorm a “plan to defeat the Islamic State of Iraq and Syria, in other words ISIS.”

Said one official, that plan “will represent a profound statement on the part of the United States that we are committed to ending this atrocity.”

Big stuff indeed. And he wanted that playbook on his presidential desk within 30 days. That would be Feb. 27 — this Monday.

Trump’s already said he’d “absolutely do safe zones in Syria” to defend refugees. But “doing safe zones” is impossible with air power alone. It takes guys with guns on the ground.

For a long time.

How long have those guys been bringing peace to Afghanistan? They’re still in Iraq. They could even be doing some measure of good in these fleapits for all we know.

But they’re still there.

Point being: It’s always a lot easier to get into these things… than it is to get out.

ISIS is more a mafia than an army. Licking ’em would be the easy part. But someone’s got to remain behind to ensure they stay licked. Otherwise the mole pops up somewhere else, in need of another whack. Then somewhere else. And another.

On the stump, Trump said he didn’t care one whit who ruled Syria. But once troops are on the ground, maybe he’d have a change of heart. Funny things happen to a fellow in power. But we don’t know the man enough to tell.

At any rate, going into Syria might help Trump in one way…

In the meantime, we breathlessly await Monday’s unveiling of that crackerjack plan to defeat ISIS.

We just hope it’s better than the plan for Iraq…