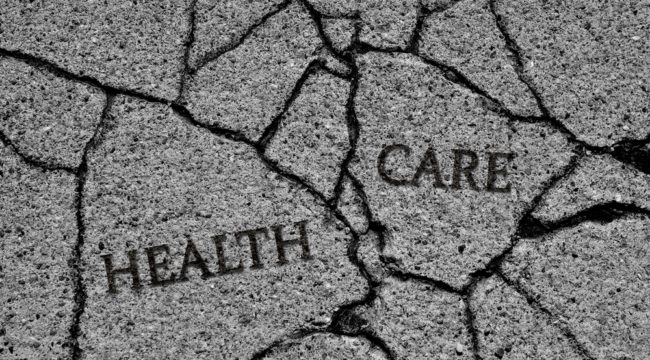 Forget ObamaCare, RyanCare, and any Future ReformCare they might come up with. It’s just shuffling the deck chairs on the Titanic.

The fact is, it’s time to start planning for what we’ll do when the current healthcare system implodes.

As with many other complex, opaque systems in the U.S., only those toiling in the murky depths of the healthcare system know just how broken the entire system is.

Only those dealing daily with the perverse incentives, the Kafkaesque procedures, the endlessly negative unintended consequences, the soul-deadening paper-shuffling, the myriad forms of fraud, the recalcitrant patients who don’t follow recommendations but demand to be magically returned to health anyway, and of course the hopelessness of the financial future of a system with runaway costs, a rapidly aging populace and profiteering cartels focused on maintaining their rackets regardless of the cost to the nation or the health of its people.

Whew, got that out all in one breath.

Ask any doctor or nurse, and you will hear first-hand how broken the system is, and how minor policy tweaks and reforms cannot possibly save the system from imploding. Based on my own first-hand experience and first-hand reports by physicians, here are a few of the hundreds of reasons why the system cannot be reformed or saved.

Say 6-year old Carlos gets a tummy-ache at school. To avoid liability, the school doesn’t allow teachers to provide any care whatsoever. The school nurse (assuming the school has one) doesn’t have the diagnostic tools on hand to absolutely rule out the possibility that Carlos has some serious condition, so the parents are called and told to take Carlos to their own doctor.

Their pediatrician is already booked, so Carlos ends up waiting in the ER (emergency room). Neither the school nurse nor the parents see the symptoms as worrisome or dangerous, but here they are in ER, where standards of care require a CT scan and bloodwork.

Hours later, Carlos is released and some entity somewhere gets an $8,000 bill — for a tummy-ache that went away on its own without any treatment at all.

Since the Kafkaesque billing system rewards quick turn-arounds, observation is frowned upon unless it can be billed. So if observation is deemed necessary (to avoid any liability, of course), Carlos might be wheeled into an “observation room” filled with other people, where a nurse pops in every once in a while. This adds $3,000 to the bill.

(Never mind the stress on Carlos being in such unfamiliar surroundings; he might have felt better if he hadn’t been subjected to the anxieties that come with being enmeshed in the healthcare system’s straight-jacket of standards of care.)

If Carlos doesn’t feel better after all this, then the bill is set to balloon bigtime because an overnight stay in the hospital is the next step — and if there isn’t a 100% certainty that there is no chance of his stomach-ache becoming something serious, then the system will insist on overnight observation as the only legally defensible option.

There are other ways to increase the fees without actually providing additional care; was Carlos receiving “critical care”? Of course he was, because, well, it pays better, and by definition any ER visit is critical care.

This example is just the tip of the iceberg, but you get the point: all institutional care decisions ultimately revolve around thwarting future liability claims and maximizing the billing value of each interaction or procedure.

You’ve probably seen some of the racketeering that passes for “business as usual” in the pharmaceutical arm of the “healthcare” industry. A pharma company that spent $500,000 trying to keep pot illegal just got DEA approval for synthetic marijuana. Pinworm prescription jumps from $3 to up to $600 a pill.

Off-patent medications double or triple in cost, and then double or triple again with a few years, without any justification. To extend expiring patents, Big Pharma corporations petition the FDA to change the target audience for the med, and this trivial administrative change awards the corporation years more of lucrative patent protection.

Everyone knows the system is unsustainable, perverse and insane, but they are powerless to change it within the system as it is. The usual sort of political horsetrading that passes for “reform” yielded ObamaCare, which did essentially zero to limit costs or cartel rackets.

A system based on parasitic predation by all the cartel players cannot be reformed or saved from its own perverse incentives and skyrocketing costs. The foundations of U.S. healthcare are rotten to the core.

“Reform” is an appealing delusion, but the rot is so deep and so pervasive it is embedded in the society and the culture, beyond the reach of legislative overhauls, no matter how well-meaning.

The trends cannot be reversed by policy tweaks and tucks. Consider: The U.S. spends more than twice as much per person than our advanced competitors such as Japan and France.

The U.S. spends 2.5 times more per person than the OECD (i.e. the industrialized nations) average:

Wages have risen 16%, GDP rose 168%, and healthcare soared 818%. Do you reckon wage earners might have a hard time paying for healthcare nowadays?

If healthcare had risen only as much as official inflation, each household would be saving $10,000 per year — $100,000 each decade. $100K here and $100K there, and pretty soon you’re talking real money in a conventional wage-earner household budget.

Projections of skyrocketing Medicare and Medicaid program costs guarantee national bankruptcy. The projection of 90 million Medicare enrollees is predictable, but there is no reason to believe costs will be limited to $20,000 per enrollee annually.

U.S. health care costs more in every category than other healthcare systems.Tweaking policy in one slice does nothing to limit the staggering increases being logged in all the other tranches of the system.

America’s healthcare system is the perfection of the fraud triangle: the pressure to increase billings, fees and profits is immense, the rationalizations are unlimited (it’s within the legal guidelines, etc.) and the opportunities for fraud are equally unlimited.

Individual caregivers and administrators want a different, better role and a better outcome, but each is trapped in the system as it is — and reform is impossible given the systemic foundations, incentives and legal framework.

It’s time to start planning for what we’ll do when the current system implodes.We might start by considering the “impossible” health care solution: go back to cash.