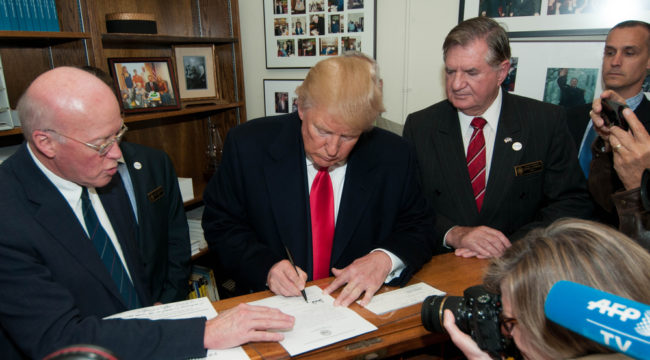 House Republican leaders abruptly pulled a Republican rewrite of the nation’s health care system from consideration on Friday, a dramatic acknowledgment that they are so far unable to repeal the Affordable Care Act.

“We just pulled it,” Trump confirmed.

All the last-minute horse swaps and arm twists just couldn’t persuade enough ladies and gentlemen of the jury.

It would have only taken 21 Republican “nays” to sink the bill.

And at least 30 House Republicans leaned nay, according to the latest nose count. It proved too harsh for some. Not harsh enough for others.

Obamacare lives — for now at least. And maybe for good unless the GOP can herd enough cats.

If The New York Times is to be believed (use your best judgment), the whole health care fiasco has Trump pointing a big, fat finger at Paul Ryan.

Trump apparently told four people “close to him” that he wanted tax cuts first — until Ryan got in his ear.

[Trump] said ruefully this week that he should have done tax reform first when it became clear that the quick-hit health care victory he had hoped for was not going to materialize on Thursday.

We’d happily close out all the land west of the Hudson for six pennies on the dollar — gold — to have been a fly on that wall.

Of course, we couldn’t repeat much of it (our rigorous Presbyterian standard).

But if Trump stumbled at this, his first hurdle… what about the mystique of the great deal-maker? What about art of the deal?

And does this mean no tax cuts… no big infrastructure spend… no business deregulation?

The decision means the Affordable Care Act remains in place, at least for now, and a major GOP campaign promise goes unfulfilled. It also casts doubt on the GOP’s ability to govern and to advance other high-stakes agenda items, including tax reform and infrastructure spending… and the defeat undermines Trump’s image as a skilled deal-maker willing to strike compromises to push his agenda forward.

David Stockman agrees the defeat strips the emperor to his birthday suit:

The notion that The Donald is some kind of brilliant deal-maker will be replaced by the reality that he is an impetuous, undisciplined, naïve amateur that most of the Imperial City already detests and is looking for every opportunity to take down.

The Dow rose some 40 points this morning on guarded optimism.

But it closed the day down 60, the losses mounting as the afternoon wore on.

A straw in the wind perhaps?

And as the health care imbroglio officially descends from poor theater to 12-ring circus, the spotlight soon shifts to the debt ceiling crisis…

David projects the Treasury will be out of cash by Memorial Day at the going rate.

Can the bickering Barnum & Bailey act known as the Republican Party pull its act together for a deal?

There is no pathway to a majority — especially after the Obama Lite fiasco — to raise by trillions the $19.9 trillion ceiling.

Then comes “the Fiscal Bloodbath and the day of monetary and fiscal reckoning.”

And maybe sooner than later given the pace of events.

Delay may indeed be preferable to error, as Jefferson said at the top.

But as Trump fails his first major exam… he might soon be unable to afford either.