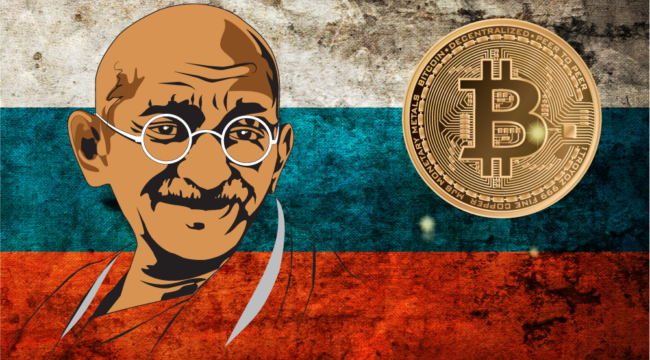 “First they ignore you,” began Gandhi.

If “you” happen to be cryptocurrencies, old Gandhi may have been a prophet…

Then it laughed at them…

“[It is] hard to argue cryptocurrency is not a pyramid scheme.”

“We are very skeptical,” snickered the first deputy governor of the Russian central bank.

The first deputy governor of the central bank:

“We cannot give direct and easy access to such dubious instruments for retail [investors].”

Vladimir Putin himself said cryptocurrencies were the coin of crime, of vice, of terrorism; a cutthroat’s money.

Russia’s finance minister conceded last week that “cryptocurrencies are a fact of life.”

Better to join them if you can’t beat them, says the Russian communications minister:

We will run [a cryptocurrency] for one simple reason: If we do not, then in two months, our neighbors in the Eurasian Economic Community will do it.

Now Vladimir Putin has officially called for a Russian cryptocurrency — the “cryptoruble.”

As we noted last week, we’ve been keeping two sets of books on cryptocurrencies.

The first set of books reveals a vision of 17th-century tulips. The second a vision of 21st-century gold.

Does Russia’s surrender mean we heave the first set into the fire?

Or maybe Russia’s “surrender” isn’t a surrender at all, but a feint… a flanking maneuver so cunning you could stick a tail on it… and call it a weasel.

Chess is the Russian national sport, after all.

They put out their tongues at centralized control… and spit defiance in the face of authority.

Cryptocurrencies war against the largest monopoly in the world — the state monopoly on money.

Governments have been patiently watching blockchain technology (the technology behind cryptocurrencies) develop and grow outside their control for the past eight years. Libertarian supporters of blockchain celebrate this lack of government control. Yet I believe their celebration is premature and their belief in the sustainability of powerful systems outside government control is naïve.

Governments don’t like competition, especially when it comes to money. Governments know they cannot stop blockchain — in fact, they don’t want to. What they want is to control it using powers of regulation, taxation and investigation and ultimately more coercive powers, including arrest and imprisonment of individuals who refuse to obey government mandates.

Maybe Russia’s launching its own cryptocurrency to clear the field of competitors.

Jim Rickards is not the only one to suspect a deep game of chess here.

With Russia and China both embracing the idea of sovereign cryptocurrencies, it’s time to ask a simple question: Why is a technology threatening to decentralize money so attractive to highly centralized, authoritarian regimes?

Answering his own question:

They are trying to figure out how to lower the cost for a centralized issuer to control everything that’s going on in the financial system… The costs of running a monetary system would go down… and transactions would become traceable by governments, above all for tax purposes.

That suspicion is our suspicion — and it would explain Russia’s “surrender.”

The fox “surrenders” to the chickens and is marched right into the henhouse.

Every time the government regulator moves on the innovator, the innovator ducks into his hole and his head pops up in another.

The oaf goes at him again… with the same result.

China, for example, has been chasing bitcoin from one hole to the next in order to keep capital from fleeing the country.

But each time China “cracks down” on bitcoin, its price dips initially — and then rebounds — even higher than before.

Maybe the next “crackdown” succeeds. But maybe it doesn’t.

Innovator versus bureaucrat — it’s a race we track closely here at The Daily Reckoning.

The crypto-innovator has the lead at the turn. The bureaucrat is making his move.