The Fed, Stress Tests and Distorted Reality on Wall Street

“Reality is merely an illusion, albeit a very persistent one.”

The quote, largely attributed to Albert Einstein, while not directed at Wall Street and the Federal Reserve perfectly describes the latest stress test debauchery.

Hidden behind the Fed’s second interest rate hike in 2017, the U.S central bank released a report on the health of Wall Street. The rosy scenario findings concluded that nearly all of the major Wall Street banks passed the latest round of stress tests.

Then comes reality to tear down that illusion, persistently as ever.

The troubling news found in the stress tests’ Comprehensive Capital Analysis and Review (CCAR) is that it appears the Fed believes that Wall Street is actually stable.

In the report from late June, the U.S central bank found that, “its review of the capital planning practices of the nation’s largest banks… did not object to the capital plans of all 34 bank holding companies participating…”

The only bank that the Fed required a more elaborate capital plan was Capital One Financial. The Fed said that the bank holding company has been asked for another round of review, “requiring the firm to submit a new capital plan within six months that addresses identified weaknesses in its capital planning process.”

What that means is that the big banks on Wall Street, which had once been on the verge of complete failure a decade ago, are now receiving the “all clear.” While in practice some banks may have made strides to build up the amount of reserves held – instability still remains.

Too big to fail has not receded. In fact, much of the risk has only grown further. Now with the go ahead from the Fed, Wall Street looks to take full advantage.

The biggest bank on Wall Street, JPMorgan Chase & Co., has wasted no time acting on the green light from Chair Janet Yellen and the Federal Reserve Board. 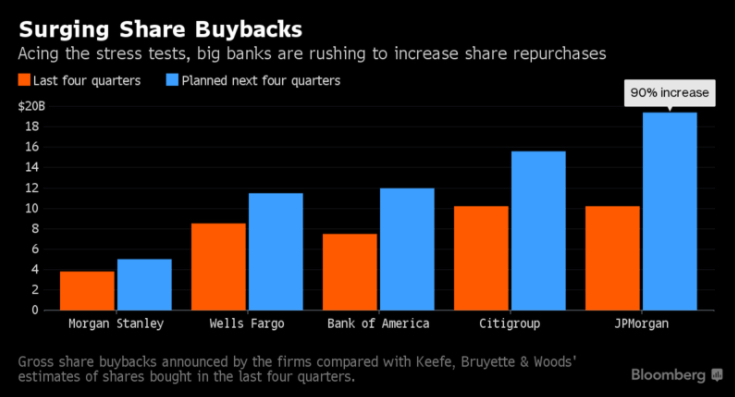 After the Fed’s stress test reporting, JPMorgan has announced plans to raise its repurchasing program to $19.4 billion over the course of the next year. That’s a 90% increase over the year prior.

While it is well within the right of Wall Street banking institutions to buyback stocks, the stress test signals do not clearly show that real, permanent safety measurements put in place have made the economy more secure.

The U.S government made this clear less than a year ago in an investigation that found severe holes in the monitoring system.

“The Federal Reserve also has not conducted analyses to determine if its single severe supervisory scenario is sufficiently robust and reliable to promote the resilience of the banking system against a range of potential crises.

The report went even further in its critique noting:

“Many different types of financial crises are possible, and the single selected scenario does not reflect a fuller range of possible outcomes. Without additional analysis, the Federal Reserve cannot be reasonably assured that banks are resilient against a range of future risks.”

Translation, the Fed is yet again failing to prevent risk.

The U.S central bank is relying on faulty models and hollow measurements to understand what risks may exist on Wall Street. It has once again allowed a risk-on culture to permeate.

When the Obama administration passed the Dodd-Frank Act in 2010, many felt that the 2,300 page document could reign in Wall Street. Through stress tests, the Fed could understand and reduce risk.

Unfortunately, the Office of Financial Research, which was created by the sweeping Dodd-Frank legislation, found considerable flaws.

“The financial system is much more concentrated to (and firms’ risk management is less prepared for) the failure of the system’s largest counterparty. Thus, the impact of a material counterparty’s failure could affect the core banking system in a manner that CCAR [one of the Fed’s stress tests] may not fully capture.”

Former Wall Street economist and lawyer, Jim Rickards’ warns that the conditions now are not less risky. The Strategic Intelligence editor urges that risks have simply been reorganized into different sectors so that they are more difficult to identify.

Rickards notes, “Janet Yellen, chair of the Federal Reserve System, recently said that there will not be another financial crisis “in our lifetimes.” By regulators at the Fed giving the too-big-to-fail banks a green light to pay dividends and engage in stock buybacks it sets a dangerous standard seen for the first time since 2009.”

“That’s another kind of all-clear signal that the financial system is safe and sound and that no troubles are on the horizon. Does that mean things are all good? Far from it.”

Rickards offers a firm grip on why the Fed’s results are flawed. He reports, “In the first place, Fed risk models are badly flawed and obsolete, so the Fed has no idea if the system is safe and sound.”

As results from stress tests continue to be championed by the Fed, understanding the real facts will be crucial.

By banks being allowed to repurchase and buyback their own stocks, they can act as their own exchange markets.

Such moves not only negate the risks thought to be reduced by the stress tests – but could exacerbate them. The potential for market manipulation rises and allows distortions in bank stock prices.

Stress tests or not, the current financial system continues to build upon quicksand in a risk driven environment.