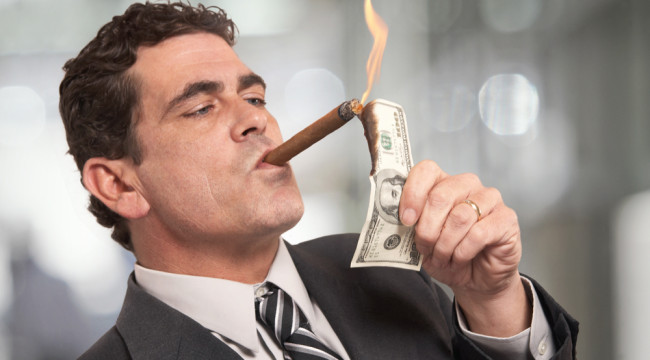 The Wall Street Journal’s pages are often filled with puffery about the salvation wrought by our central bank masters, so when a former Fed official writes an Op-Ed about their quantitative easing program, one should not expect any real surprises. Andrew Huszar, the man in charge of the Fed’s unprecedented purchases of mortgage-backed securities in 2009-2010, took to its pages on Monday to explain a little bit about the Fed’s activities to the rest of us plebes. His first sentence reads:

Wait… what? Central bankers so often march in lock step that an outright apology for what is widely considered a policy that “saved the economy” from certain doom is, well, disarming.

The interesting thing is he didn’t just apologize for the program’s failure to usher in a new era of prosperity. He said it basically accomplished nothing other than lining pockets on Wall Street with fat stacks of cash:

Despite the Fed’s rhetoric, my program wasn’t helping to make credit any more accessible for the average American. The banks were only issuing fewer and fewer loans. More insidiously, whatever credit they were extending wasn’t getting much cheaper. QE may have been driving down the wholesale cost for banks to make loans, but Wall Street was pocketing most of the extra cash.

It gets even better! He even throws his old bosses under the bus:

From the trenches, several other Fed managers also began voicing the concern that QE wasn’t working as planned. Our warnings fell on deaf ears. In the past, Fed leaders — even if they ultimately erred — would have worried obsessively about the costs versus the benefits of any major initiative. Now the only obsession seemed to be with the newest survey of financial market expectations or the latest in-person feedback from Wall Street’s leading bankers and hedge fund managers. Sorry, U.S. taxpayer.

The largest financial intervention by a central bank in world history, he noted, produced a mere 0.25% bump in GDP growth. That’s $4 trillion in asset purchases and new money blasted into the economy having created a mere $40 billion or so in economic growth.

The Fed, naturally, is unlikely to be deterred by this revelation. Even a small decline in the $85 billion per month in asset purchases seems to be impossible at this point, with the “stimulus” baked into the economic cake as rumors of tapering meet with huge sell-offs. The paralyzed central bankers dare not stop this gravy train, even if it only stops at Wall Street.

We can’t imagine a more lucid proclamation of the failure of monetary policy has ever been written. And straight from the horse’s mouth! The guy in charge of QE1 says QE1 was a sham. QE has long been considered a core function of the Federal Reserve. How does this bode for the future of the Fed?

P.S. Listening to QE cheerleaders for market analysis and stock tips will get you burned in the end. Readers of The Daily Reckoning email edition get smart, actionable ideas on reducing their exposure to government hubris and growing their wealth. Sign up today by clicking here.