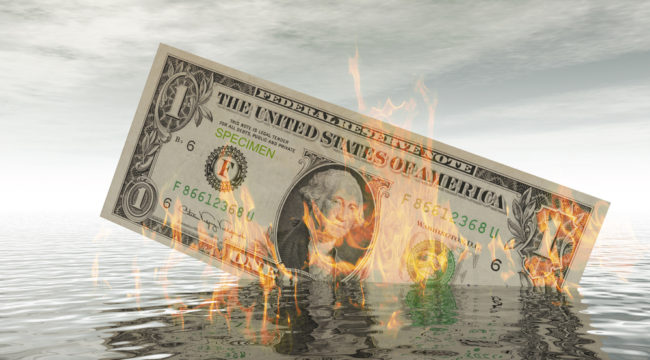 “An Emerging Dearth of Dollars”

Uh-oh: The mainstream is starting to fret about the great dollar shortage.

With the help of Jim Rickards, we’ve been delving into the paradox of a “dollar shortage” periodically since September. The paradox is this: While the Federal Reserve blew up its balance sheet by $3.4 trillion between 2008–2015, “the world created new dollar-denominated debt faster than the Fed created money,” as Jim explains it. Indeed, more than $60 trillion of new dollar-denominated debt came into existence during this time.

It’s all good… as long as the dollar is weak. But relative to a large basket of foreign currencies, the dollar is approaching its strongest level at any time in the last two decades… 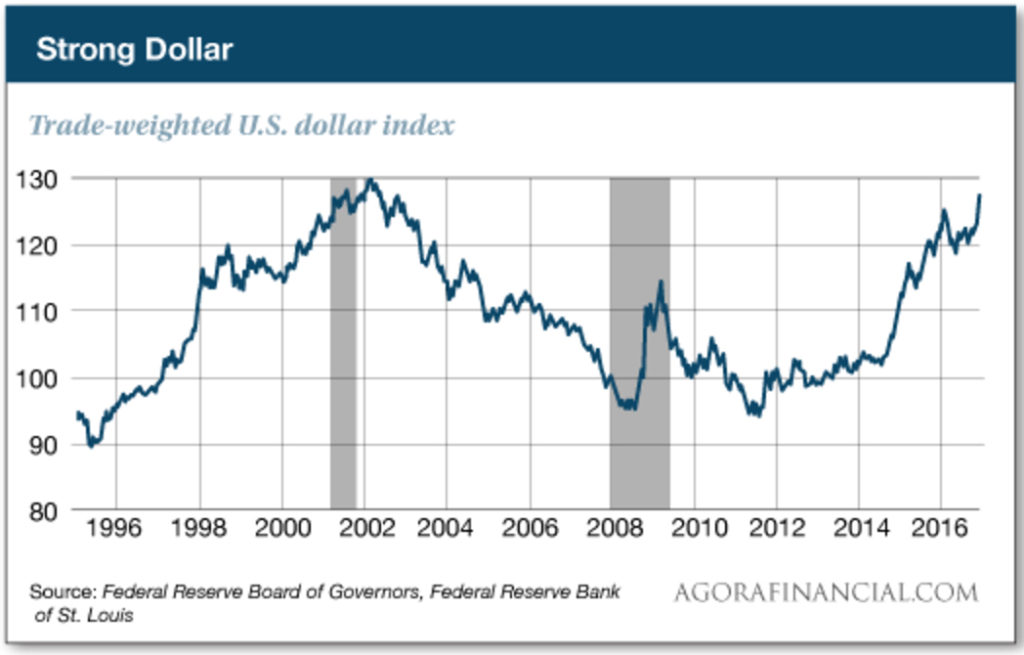 “When the dollar goes up, it directly impairs the risk-taking capacities of banks and investors alike,” writes Hyun Song Shin, chief of research at the Bank for International Settlements.

As you might know, the BIS is the “central bank for central banks.” Jim Rickards says unlike many central bankers, the BIS folks are pretty sharp cookies. Mr. Shin, according to The New York Times, “is concerned the dollar’s rise will worsen what he refers to as an emerging dearth of dollars, which could bring back memories of the financial crisis in 2008 and 2009. Back then, a global rush into dollars caused short-term borrowing rates to skyrocket, forcing hedge funds to shut down and banks to fail.”

The dollar shortage is even getting the attention of mainstream strategists like Paul Christopher at Wells Fargo Advisors: “In the type of global economy we live in, [Federal Reserve chair Janet Yellen] has to be careful about the dollar increasing too much, creating dollar shortages and liquidity problems as a result.”

Alas, Fed leadership is clueless. Quelle surprise. And so they plow ahead with plans to raise its benchmark fed funds rate next Wednesday — which will have the effect of further strengthening the dollar.

As we pointed out last month, Fed Vice Chair Stanley Fischer said he was “reasonably confident” foreign economies could absorb the impact of that move: The dollar would strengthen further, yes, but it wouldn’t necessarily tank the value of foreign currencies.

Let’s go back to that $60 trillion of dollar-denominated debt that’s come into being since 2009. As Jim’s pointed out for the last two years, about $9 trillion of that total was issued by companies in emerging markets; those companies need a weak dollar to keep the cost of servicing that debt from spiraling out of control. But the dollar’s been rising relentlessly since mid-2014.

Also on shaky ground is $5 trillion in debt issued by U.S. energy producers. It was bad enough most of that debt was issued on the assumption of $80-plus oil prices into perpetuity. (They’re $51.45 this morning.) But this is worse: “A strong dollar implies lower oil prices,” Jim reminds us, “despite OPEC’s machinations.”

Reminder: A strong dollar is the only reason gold is so weak right now. The bid is down to $1,161 this morning, retesting a 10-month low.

“Further evidence,” says Jim, “comes from the fact that gold is performing much better when measured in Japanese yen, Chinese yuan and euros. In other words, the recent price action is not really a gold story; it’s a dollar story.”

Not that it makes gold’s recent swoon easier to take if you transact mostly in dollars, but that’s the story.

“Beyond that, the strong dollar will strangle the U.S. economy with imported deflation and weaker exports.” Oh, and it’ll worsen the great dollar shortage and threaten to detonate a large portion of that $60 trillion in dollar-denominated debt we mentioned.

Then the Fed will have to reverse course. Jim figures by next spring. Gold holders, keep the faith. “Gold is in the doldrums now, but it is poised for a strong comeback when central bankers confront the unsustainable reality of higher real rates on dollar debt.”