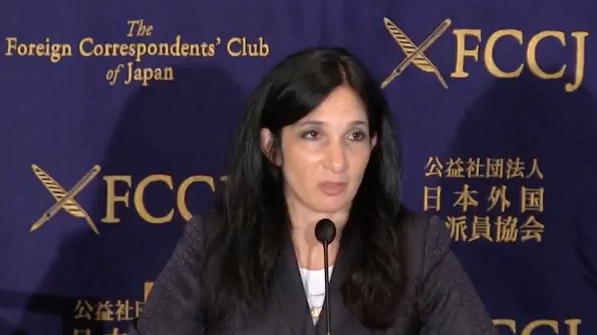 Nomi Prins joined The Foreign Correspondents’ Club of Japan in Tokyo to discuss the banking landscape and state of financial regulations in the Trump era. The central bank historian and financial expert also took a deep dive into the shifting relations between the United States and Japan and what easy money policy has meant for financial markets.

The author began the discussion noting that, “A lot of things have happened in the past months in particular within finance and trade alliances amongst countries in the Trump era.”

Speaking on the recent gathering of world leaders Prins’ notes, “One of the things that came out of the G20 is whether it is America last in terms of the alliances occurring today. The American first policy is pushing new diplomacy and agreements with countries that have not spoken with one another in the past. This is happening for two reasons. One, from a standpoint of protecting the commonality of the world. It is filling the gap between receding powers versus rising power. Two, it is an anti-protectionist move.”

Prins’ then builds on easy money policy stating, “We still have a problem of banks that are too big to fail. We still have a problem where the initial financial crisis that happened ten years ago in the United States, that was the result of the banks being too large and too speculative… in using the guarantees that the U.S government has provided to bank depositors and the provisions provided in the Glass-Steagall. Those deposits have become a guarantee for banks to become bigger and a guarantee for financial crises to become something that the government subsidizes. Our Federal Reserve, our central bank, also subsidizes this.”

Nomi Prins is a former Wall Street insider where she worked as a Managing Director at Goldman Sachs among other major financial outlets. She is also a best-selling author who wrote All the Presidents’ Bankers, a book that took on the hidden alliances between Wall Street and Washington.

Easy Money and Too Big to Fail

While answering to what the global central bank policy has been over the past decade the financial expert levels, “Quantitative easing, which was the idea of the Federal Reserve, is the idea that putting money into the markets and banking systems in order to keep the banking system alive. For ten years the central banks of the world, in particular the G7.”

“Those banks, at the behest of the Fed, were pushed to support too big to fail institutions and continued to support zero percent interest rate policy. Yes, the Fed has raised them a little bit. The economy in the U.S has been good enough and growing fast enough for them to start to raise rates a bit.”

“Since December 2015 until this June they have raised rates a full one percent. In contrast, the Bank of Japan and European Central Bank has gone negative on rates. We still have a world where money has helped the banking system and gone into stock markets. Debt continues to be issued cheaply and it has all been treated very easily.”

Switching focus the author turned to the current White House asking, “How does all of this related to Trump and everyday populations? None of this money is going into the real economy. In particular, for the G7, wages have been stagnant. Actual real growth has been stagnant. Inequality has been the same, if not higher. However, the markets have been up as we can see in bonds, stocks and particularly bank stocks within the Trump administration.”

“All of that connects back to the fact that in the beginning of the financial crisis was a removal of Glass-Steagall. Prior to 1999, this Act segmented off for safety sake, people’s deposits, the bets that banks were allowed to take.”

“By 2007-2008 the economy would’ve crashed and burned without this G7-type alliance between the central banks that provided cheap capital to the markets. It did not have a government push into real infrastructure building, development or economic growth beyond what was found in markets and banks.”

She argues critically that easy money did cause a considerable pushback from Non-Western states. “Something else has happened since the crisis. In the ten years since, a growing number of central banks, outside of the G7, began to push back. The People’s Bank of China, the Chinese central bank, let out a growing criticism of what the U.S and its central bank had done financially in the wake of the crisis. In March of 2009 the PBoC Governor Zhou said at the time, very publicly, that this cannot continue.”

“Having the U.S dollar as the main international reserve is inherently unstable for the world. Other countries began to echo the same sentiment. Not that the U.S dollar hasn’t stayed strong since, along with a major U.S military force, but a “testing of the waters” has begun. This has brought about new alliances in the deals in markets, trading, diplomacy and defense. Since the arrival of Trump, this trend has accelerated.”

Speaking on the state of the global economy she warned, “There is nearly 17% of global GDP that equals the equivalent of the top three central banks. There is a substantial amount of money that has gone into these banks that have basically reconstructed their balance sheets as “taking money out of the market.” That is money not being used for anything constructive such as infrastructure, training programs, etc.”

“The instability that people feel and the level of constraint in their lives can be translated to money being put in the market and not to the public. There is a possibility that as these new trade alliances happen that more infrastructure development and jobs could be utilized and tap into this money for real growth. Otherwise, we are just going to continue to see the same instability.”

“Ultimately, being stagnant will just leave the door open for another financial crisis. If debt repayment has to occur, whether from governments or corporations, things will start to default. All of the shifting alliances that continue to grow out of political and financial instability will continue to happen.”

Taking aim at reckless central bank policy Nomi Prins pressed, “Unless we see this central bank money deployed in a way that is positive and contributes to real economic growth, then we do have the possibility of getting to another crisis. Meanwhile the lack of actual economic conversations and policy action from places like the G20 will continue.”

In a final warning about the negligence seen from financial leadership the economist left with a stark warning. “The U.S banks may have done well during the last set of stress tests done by the Federal Reserve. However, the Fed took the answers from the people responding to their own questions – which were the banks.”

“More recently we’ve seen Fed Chair Janet Yellen note in June that she does not expect another crisis in our lifetime. The reality is that completely ignores how fundamentally distorted money and markets actually are.”

To catch the full discussion with Nomi Prins that covers central bank policy and what it means for the financial future CLICK HERE.