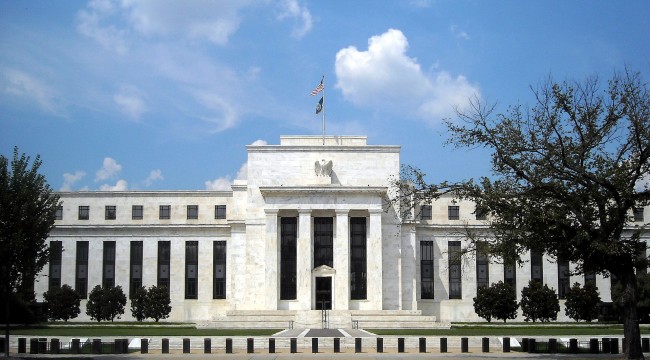 It is perhaps fitting that I am posting a call for a financial crisis that fails to respond to the usual central-planning manipulations on Bastille Day. There are two main lessons for the present era we can draw from the storming of the much-hated Bastille fortress-prison by a revolutionary mob in 1789 Paris:

We are in the endgame of central planners’ attempts to keep the lid on the simmering stew of profound imbalances that characterize the status quo. As I have described many times, Maintaining the Illusion of Stability Now Requires Ever-Greater Extremes of central-planning policies.

Mortgage/housing market melting down due to systemic fraud? Nationalize the mortgage market.

This is what the federal/Federal Reserve central planners did post-2008, as 97% of all mortgages were guaranteed by federal agencies and the Fed bought $2 trillion of the $10 trillion outstanding mortgages in the U.S.–fully 20% of the entire mortgage market.

Stock market bubble popping? Ban short-selling, criminalize negative comments in the media, and withdraw half the companies on the stock exchange from trading.

Another way to understand the increasing reliance on central-planning extremes and their declining effectiveness is diminishing returns: more treasure, capital, time, energy and labor must be expended to keep the status quo from falling off a cliff.

The Fatal Disease of the Status Quo: Diminishing Returns

All of this extreme malinvestment requires more and more control of the national resources, so liberties must be curtailed and further extremes of centralized power and control must be imposed on the hapless citizenry. The resources of the many are increasingly stripmined to maintain the power and avarice of the few.

I recently discussed these trends with Greg Hunter of USAwatchdog.com in a 23-minute video program, Policy Extremes Maintain Illusion of Stability.

Let’s review the policy extremes that are yielding diminishing returns:

1. Zero interest rate policy (ZIRP): central planners’ favorite tool for robbing savers and people who have socked away money for their retirement and handing the cash to banks. Now that central bankers have pegged interest rates at zero for 6+ years, there’s nothing left in ZIRP but to push rates into negative territory, i.e. it now costs you money to park your cash in a bank.

There’s not much juice left in the zero-interest rate policy, and negative interest rates smack of central-planning desperation–which feeds the very fear and insecurity that trigger panics and crashes.

2. Directly buying assets to prop up failing markets. The Chinese central planners are the latest authorities to reach for the last tool at the bottom of the central-planning toolbox: buying stocks and bonds directly to create the illusion of demand for increasingly shaky financial assets.

There are two problems with creating bogus demand by using central bank money to buy stocks and bonds: one is this communicates desperation (see above), and the vast scale of bubblicious debt and equity markets have turned even trillion-dollar purchases by central planners into handfuls of sand thrown at a rising tide.

Global equities now total $64 trillion and debt securities (bonds, etc.) total $95 trillion. Global real estate totals $180 trillion. Once the risk-on euphoric trust in central banks’ omnipotence fades and risk-off selling begins in earnest, how much would central banks have to buy of this $340 trillion to keep the bubble inflated?

Is it plausible to believe that central planners buying less than 1% of this will stop a landslide of selling? Would even 2% ($7 trillion) make any difference?

3. The grab-bag of desperate policy extremes: banning short-selling, bail-ins (the theft of depositors’ cash to bail out the bankers), partial closure of stock exchanges, currency devaluations, and so on. You can create a good catalog by just listing every action of Chinese central planners in the past month.

As noted above, the problem with these policy extremes is that they are so painfully visibly acts of central-planning desperation. If things are as positive as we’re told, then why are central planners forced to impose such absurdly extreme policies to keep the status quo from imploding?

If these policies worked, why are interest rates still pegged to zero after six years of “growth” and the inflation of monumental asset bubbles?

If these policies don’t work (and they obviously don’t, otherwise the authorities could have normalized interest rates and ceased quantitative easing, stock purchases, plunge protection schemes, etc. many years ago) and central planners keep doing more of what has failed, then the only possible conclusions are:

Ignore the goofy guy in the blue shirt (me) and just ponder the issues Greg raises: