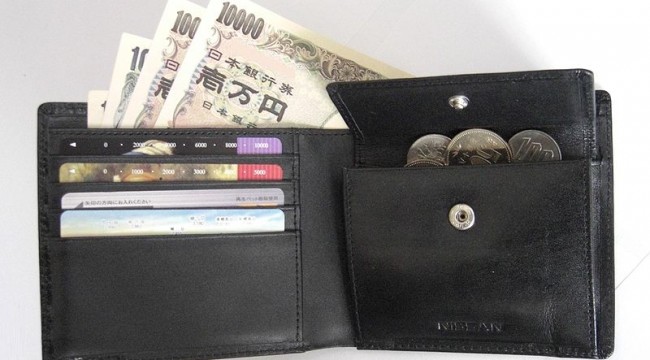 On the surface, everything still looks remarkably stable in the core industrial economies. The stock markets in Japan, Germany and the U.S. are only a few percentage points off their highs, and we’re constantly assured that inflation no longer exists and official unemployment is low.

In other words, other than the spot of bother in Greece, life is good. Anyone who signs on the dotted line for easy credit can go to college, buy a car or house or get another credit card.

With more credit, everything becomes possible. With unlimited credit, the sky’s the limit, and it shows.

Europe is awash with tourists from the U.S., China and elsewhere, and restaurants are jammed in San Francisco and New York City, where small flats now routinely fetch well over $1 million.

In politics, the American public is being offered a choice of two calcified, dysfunctional aristocracies in 2016: brittleness is being passed off as stability, not just in politics but in the economy and the cultural zeitgeist.

But surface stability is all the status quo can manage at this point, because the machine is shaking itself to pieces just maintaining the brittle illusion of prosperity and order.

Consider what happened in Greece beneath the surface theatrics.

Here is the debt in 2009–mostly owed to private banks and bondholders: 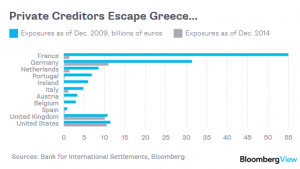 Here is the debt in 2015–almost all was shifted onto the backs of Eurozone taxpayers: 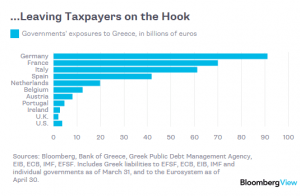 This re-set, while painful in the short-term, is the only mechanism available to force reforms on a self-serving kleptocracy and rid the economy of a dependence on unsustainable credit expansion.

This much-needed re-set to an economy that serves the many rather than the few is what the Powers That Be are so fearful of, for it is the few who garner most of the gains of a corrupt, fully financialized neofeudal system and it is these few who fund the election campaigns of the politicos who are so desperate to maintain the perquisites of the Financial Nobility.

Austerity is meted out to debt-serfs while those at the top transfer tens of billions to their private accounts.

There are variations of this basic flow of income from serfs to the nobility, of course; stock market bubbles are inflated by authorities, insiders sell, sell, sell as credulous banana merchants and wage-earners buy, and then when the bubble bursts, these same authorities ban selling by the small-fry bagholders.

But this is not real stability; it is a brittle simulacrum of stability, an illusion that has required the status quo to pursue extremes of policy and debt that are intrinsically incapable of yielding stability.

In effect, the status quo has greatly increased the system’s vulnerability, fragility and brittleness–the necessary conditions for catastrophic collapse–all in the name of maintaining a completely bogus facade of stability for a few more years.

How the Fed Fails

Charles Hugh Smith shows you why that outrages the “New Nobility,” and why the Federal Reserve will fail due to its own contradictions.