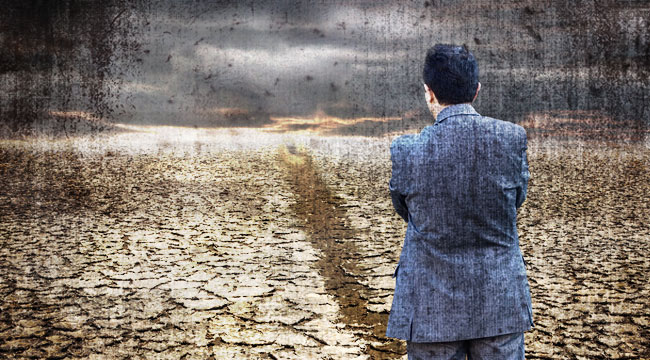 D-Day Minus One for the Dollar

Never trust the establishment media to wrap their arms around a complicated story about global finance. Especially when the story involves the machinations of elites.

So it goes with the event Jim Rickards has taken to calling “D-Day” for the U.S. dollar — scheduled shortly after the markets close tomorrow afternoon.

At that time, the Chinese yuan will be included in the International Monetary Fund’s special drawing rights. SDRs are a form of “world money” exchanged among governments and central banks. 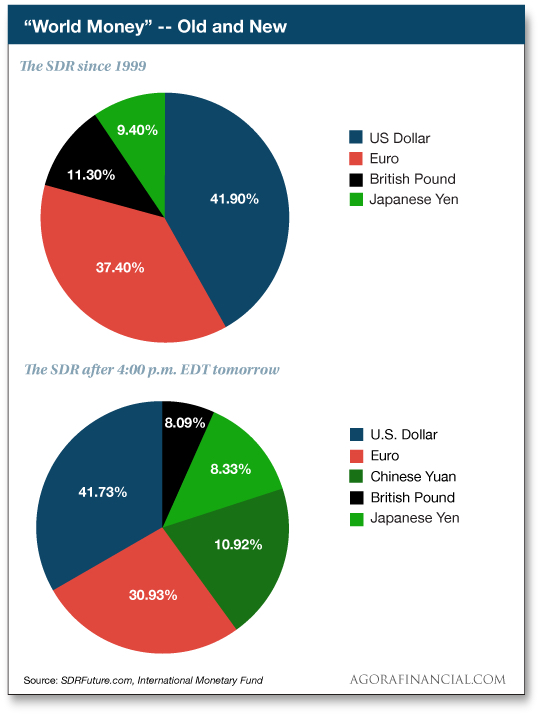 So what’s it to you?

With the date looming, Bloomberg decided to take a stab this week: “The yuan’s ascent is a validation of the importance of the world’s second-biggest economy and the work policymakers have done to allow freer access to the nation’s markets.”

Hey Barron’s, you want to give it a try?

“From a reform perspective, the renminbi’s SDR status confirms the recognition by the international community of China’s economic ascendancy and structural reform efforts.”

Also true. But this change is far more than Western elites patting Chinese leaders on the head for playing by their rules.

And so we return to some points we first made 45 days ago, when Jim first rolled out the “D-Day” theme…

Consider “D-Day” another milestone on the dollar’s long march to oblivion — akin to when President Nixon cut the dollar’s last tie to gold in 1971.

He made the announcement on a Sunday night. Life didn’t change much on Monday morning.

Not right away. The event doesn’t even show up dramatically on the chart below. But it was still an essential move in the dollar’s long-term trajectory… 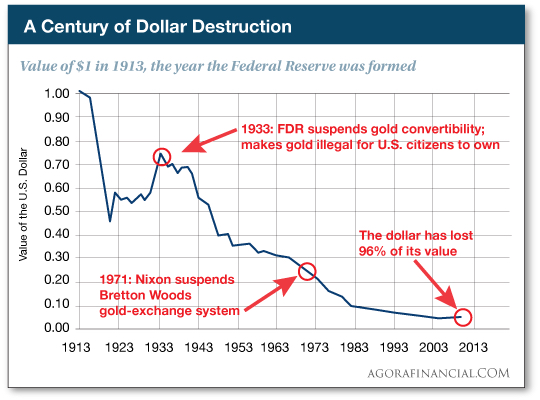 As outrageous as that chart is, it’s ancient history in the context of the dollars you hold in your pocket now. After all, you still use them to purchase goods and services… and the adjustment to the SDR doesn’t change that.

But the adjustment does ensure the purchasing power of those dollars will weaken at an accelerating pace. The dollar of 1913 that’s worth only 4 cents now will soon be worth only 3 cents… then 2… then 1… and so on.

“Everything will cost more to pick, ship or stock,” says Jim. “Soon you’ll pay a little extra for apples at the fruit stand. At the coffee shop, they’ll tack another quarter on the price of a latte.

“Online prices will go up when you buy anything tech, because all that’s imported. And it costs more to get it out for delivery.”

“On Wall Street, all kinds of ledgers will start to ooze red,” Jim goes on. “The multinationals will get hit first.”

“And that’s where the crisis will accelerate: As dollars lose clout, paying an overseas workforce will lose luster. Sweetheart import deals will dry up… and so will international tax treaties… until ‘cheap’ goods no longer exist for Americans.”

Again, it all starts tomorrow after the market closes for the week. Life on Saturday won’t feel much different. And unlike 1971, no one will interrupt prime-time TV to let you know. That’s why Jim’s been banging the drum these last six weeks.

As a practical matter, it won’t make so much difference if you start making plans today or next week or even sometime before year-end. But you do need to prepare. If you aren’t up to speed yet, we urge you to check out Jim’s D-Day expose before it’s overtaken by events tomorrow.

P.S. One more time: The world won’t come to an end tomorrow. But your world will be changed forever in ways not one in a million people will understand.

If you want that understanding — and unique tools, beyond just gold, to preserve your wealth as the dollar begins its final stage of destruction — please check out Jim Rickards’ presentation right away.