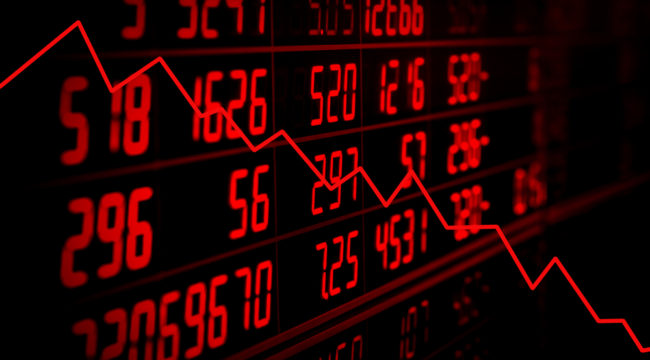 That CNBC headline whacked us in the features yesterday. We presented the case Wednesday that current market conditions tightly match those preceding three previous humdingers — “Black Monday” 1987, the dot-com wreck starting in 2000 and last July when stocks plunged 12%:

The present combination of overvalued, overbought, overbullish conditions, coupled with rising interest rates… [is a] combination that has most often been associated not only with emerging bear markets but with market crashes.

What’s drawing the comparison? Valuations. By some measures, stocks are as expensive as ever compared with their earnings. P/E ratios measure share prices to earnings. For example, if the market value of a stock is $50 and the company generates $3.00 per share in annual earnings, its P/E ratio is 16.6 (50/3=16.6).

There’s something called the Shiller P/E ratio, named after the Yale economist who conjured it. It measures P/E ratios over a 10-year period. It carries a lot of weight among the smart set. Many argue it’s been a reliable barometer of future stock returns going back to 1871.

And according to MarketWatch’s Brett Arends, Shiller’s famous ratio has “just gone from flashing amber to flashing red.”

“This is about the same level that the market hit just before the crash of 1929, and is far higher than was seen in 2007,” Arends warns. “The last time we saw the stock market this expensive on this measure was early in 2002 — just before stocks plummeted.”

The Shiller P/E ratio “has been exceeded only in the 1929 mania, the 2000 tech mania and the 2007 housing and stock bubble,” adds analyst Alan Newman.

We’re at an inflection point that I haven’t seen in my lifetime, and I’ve been involved with Washington or Wall Street for the past 40 years… Today, the market is oblivious to how far out of proportion valuations are because it expects more stimulus from the Fed.

But David says the market’s in for its comeuppance: “The central banks are out of dry powder. There will be no bailout when this thing collapses.”

Some analysts dismiss Shiller’s work. They say stocks have been overvalued for years and years and years — but the market’s trading at all-time highs anyway. It’s a false compass.

But a new study shows it’s reading true this time…

Economists Valentin Dimitrov of Rutgers University and Prem Jain of Georgetown studied the history. And they actually validate the skeptics’ claim that the Shiller P/E ratio doesn’t usually work.

That is, it doesn’t work if stocks are simply “expensive.” No. They have to be wildly expensive before the ratio applies. Investors can make money even when the Shiller P/E ratio is in the mid-20s, for example. Arends summarizes the study:

The study concluded the Shiller P/E ratio is only an omen when it’s “higher than 27.6.” Gentle reminder: It’s 27.9 today… above that threshold. It’s a level exceeded only in 1929, 2000 and 2007. A working knowledge of market history renders additional comment unnecessary.

But one thing’s for sure: We won’t be letting Mr. Market out of our 20/20 sight anytime soon…

Not for a minute.