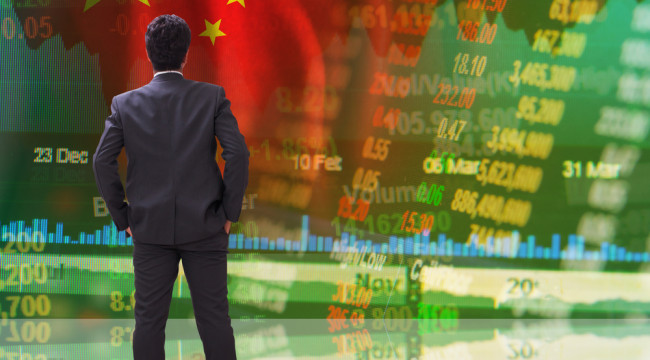 China, Dollars and the Closed System

LONDON — Yet another week starts with bad news from China sending stocks lower.

This time it’s the news that Chinese industrial firms posted the biggest fall in profits last month for four years.

Declining corporate profits look set to become a theme going forward – not just in China, but here and in the US too.

But we’ll leave that topic for another day. Let’s return now to the discussion we were having last week about China and America’s debt.

To recap, during its go-go years China built up a massive stockpile of US government debt. As we saw here, this was a direct consequence of its trade policy, rather than any kind of investment choice.

This led to a fear that China might one day dump its Treasury bonds and send US borrowing costs through the roof.

I’m sceptical. As I began explaining on Friday, just because China’s central bank sells Treasuries, doesn’t mean there’s no one wanting to buy them.

In fact, Treasury-selling by the People’s Bank of China is likely a sign that investment capital is fleeing China (as was the case during August’s upheaval).

That’s the kind of environment when demand for US Treasuries – viewed by mainstream investors as a safe haven – is likely to increase.

What Happens to the Dollars if China Sells Treasuries?

I’ve mentioned Peking University professor Michael Pettis before. He has a great bit of scenario analysis on this in his 2013 book The Great Rebalancing.

Pettis looks at what happens when the PBOC decides to sell a notional $100 of US Treasury bonds. He outlines four scenarios:

Scenario 1: The PBOC sells $100 of Treasuries and uses the money to buy other dollar-denominated assets.

Basically, the US Treasury market is barely changed. The sellers of those other dollar assets now have $100 more. Likely as not, that money will eventually end up in Treasuries, directly or indirectly.

Let’s say the PBOC buys Eurozone government bonds. Europe’s monetary authorities now have two options. One is to buy US dollar assets themselves.

This would prevent the euro strengthening against the dollar (as a result of the capital inflow) and protect European exports. It puts us back in scenario one above.

The other option is to let the euro rise. In this scenario, America’s trade position improves and Europe’s deteriorates.

With a narrower trade deficit, the US is in a better position to fund its fiscal deficit (the difference between government spending and government revenues).

Scenario 3: The PBOC sells $100 of Treasuries and buys hard commodities.

This is identical to scenario two – the only difference being the exporters of the commodities now face the choice that Europe faced.

Recall that China built up its stockpile of Treasuries because it was buying dollars to prevent its exchange rate rising too high. If the PBOC sells or reduces its net buying of Treasuries and does nothing else with the money, it implies a stronger yuan. China’s trade position deterirorates and America’s improves, again making it easier to fund a fiscal deficit via Treasury purchases.

If you found some of the above a tad technical, don’t worry.

The key point to grasp is that China selling Treasuries is not something that happens in isolation. The dollars they receive will go somewhere – and, directly or indirectly, they’ll end up back in the Treasury market.

“For every seller, there’s a buyer,” Jim Rickards told Strategic Intelligence members in a live briefing call earlier this month:

It’s a closed circuit, and that’s important to understand. Walter Wriston explained this to me almost 40 years ago, when I was a young, 20-something up-and-coming Citibanker… I was sitting with him at lunch across the table and at the time I was concerned that the Saudis were selling Treasuries—this was 40 years ago at Citi. The stories keep coming back.

So I said, “Well, you know, Mr Chairman, the Saudis are selling Treasuries and they’re taking all this money and they’re buying gold; isn’t that bad for us?” And he said, “Well, you have to understand that when they sell it, and they buy gold, the guy who sold the gold gets the money and they take the money and put it back in the bank and buy Treasuries, so it’s a closed circuit. The money doesn’t really go anywhere.

But what if investors were to shun Treasuries?

What if they come to regard them as toxic, rather than the safe haven they’re viewed as today?

Well, we could end up in the realms of debt monetisation (i.e. the Federal Reserve buying the government’s debt when no one else will).

There may however be a more subtle game to play first.

“The interesting question for me is not that the Chinese are selling—which they are—but who are the buyers?” says Jim.

“Well, the buyers are the banks.”

As we all know, banks owe government for bailing them out in 2008.

“They’re gonna do what the government tells them to do,” says Jim.

“The banks are sitting there like a sponge, and if the Chinese are gonna dump Treasuries, the Fed just calls the banks and says, ‘You buy ‘em, or we’ll put you out of business.’”