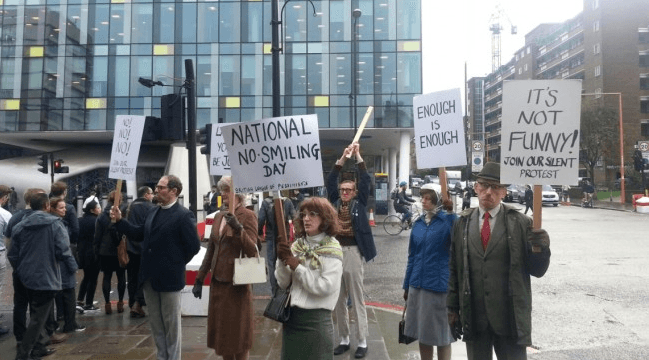 As you can see above – the scene that greeted a colleague as she made her way to the office this morning.

Reverse psychology. Maybe the authorities should announce a National No Share Buying Day if they want to squeeze the last few drops out of the bull run.

Much has been said about the risks of, say, China all of a sudden flooding the market with the US Treasuries they hold. However, what if the Fed buys them back directly?

You may have heard this idea expressed before. It goes a little like this:

So should we be worried?

I’d say no. Of all the financial threats out there, I’d actually say this one ranks pretty far down the list.

To see why, we need to start with why China built up that pile of US Treasuries in the first place.

How to achieve export-led growth

As everyone knows, China’s economy has grown spectacularly in the last couple of decades. This was achieved via classic export-led growth. China absorbed demand from the rest of the world and that demand fuelled its economy.

In technical terms, China grew rapidly by running a current account surplus. The current account measures the inflow and outflow of goods, services and any income on overseas investments.

By running a surplus, you have more money coming in that going out.

And it is an unavoidable fact that if you want to run a current account surplus, you have to run a capital account deficit. They’re two sides of the same coin, and they have to balance.

So you have money coming in via the current account, and money leaving (being invested abroad) via the capital account.

Now, China’s export-led growth meant there was a lot of money flowing into the country via the current account. So far, so good – China had its current account surplus.

However, there was also a strong desire in the rest of the world to invest in China and profit from its boom. This led to an increase ininflows on the capital account too.

This is a problem when you want to run a capital account deficit.

The job of ensuring a capital account deficit fell to the central bank, the People’s Bank of China.

The PBOC had to export sufficient capital to offset both the current account surplus and the net inflows of capital from foreigners investing in China.

This is why it ended up stockpiling US Treasuries on a massive scale.

In broad strokes, it worked as follows.

The PBOC intervened in the currency markets to prevent the yuan from rising too high. It bought dollars, paying for them with yuan. This offset the money that was flowing into China (to pay for China’s exports, and to make investments in the country)

The PBOC then recycled the dollars it bought by investing in dollar-denominated assets.

The only financial markets large enough to absorb such a huge quantity of dollars were the United States.

And US Treasury bonds, as the deepest and most liquid market in the world, were the obvious choice.

The key point is that China building up a stockpile of US Treasury bonds was a direct and unavoidable consequence of its trade policy.

More recently, however, it looks like the PBOC has indeed started selling down that stockpile.

Getting back to our reader’s question, should we be worried about this?