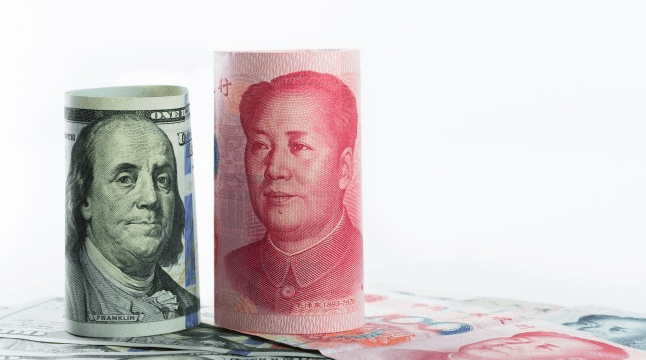 LONDON — So Janet Yellen’s now repeated the line that the Federal Reserve may yet raise interest rates before the end of the year.

And stock markets have bounced.

Some reports hail this as a sign that uncertainty over when rates will rise is more damaging to risk appetite than a rate rise itself.

Perhaps. But I don’t see that the uncertainty has lifted one iota.

So for now this belongs in the short-term noise category.

Yesterday we saw why China has built up a massive stockpile of US Treasury bonds.

We saw how it was a direct consequence of China’s export-led growth model.

And I ended by pouring cold water on the idea that China selling US Treasuries would lead to a financial market catastrophe.

Indeed, China’s central bank has been selling Treasuries this year.

Here’s Bloomberg towards the end of August:

China has cut its holdings of US Treasuries this month to raise dollars needed to support the yuan in the wake of a shock devaluation two weeks ago, according to people familiar with the matter… The People’s Bank of China has been offloading dollars and buying yuan to support the exchange rate, a policy that’s contributed to a $315 billion drop in its foreign-exchange reserves over the last 12 months.

Now, the first point to make is that yields on US Treasuries did not spike in August. In fact, the yield on the 10 Year US Treasury bond ended last month slightly below where it started it.

So we have two questions:

· Why has the PBOC been selling Treasuries when it was previously buying them?

· Why did this selling not lead to a spike in yields as feared?

Both can be answered by reference to the same phenomenon.

First, the PBOC started selling Treasuries because of capital flight. In simple terms, investment money was flowing out of China more than it was flowing in, a reversal of the previous pattern.

So the private sector capital account moved to deficit.

In 2014, as inflows dried up and outflows accelerated, China for the first time ran a deficit on the capital account large enough to balance the current account surplus, so the PBOC neither bought nor sold a substantial amount of reserves.

This trend accelerated in 2015, with investment outflows exceeding investment inflows by so large a margin that it was greater than the current-account surplus. As a result, the PBOC has had to sell a substantial amount of reserves.

In other words, the PBOC sells US Treasuries when investors are dumping Chinese assets.

Remember, the PBOC bought all those Treasuries to offset capitalinflows into China. Now that investment capital is flowing out of China, the PBOC is selling them.

[Speaking of Pettis, he gave this exact topic a thorough treatment on his blog last year. You can read it here.]

To the second question, China selling Treasuries most likely didn’t cause a spike in US yields because Treasuries are precisely where a lot of the capital flowing out of China went.

At times of market turmoil, such as we saw in August, investors turn to government bonds. In particular US Treasuries.

In short, the fear that China dumping Treasuries will lead to a spike in yields assumes no one else will be around to buy them.

If the PBOC were to flood the market with Treasuries, it could have a short-term impact, sure. But it would very likely occur at the exact moment (and possibly for the exact reasons) that investors wanted a safe haven for their money.

Traditionally, that means the dollar – and US Treasuries in particular. So there would likely be demand to meet China’s selling of Treasuries.

But what if the long-feared idea that investors “lose faith” in the dollar/Uncle Sam takes hold?

Is there another scenario in which the authorities try to backstop the government’s debt?

The reader question that kicked off this discussion was:

Much has been said about the risks of, say, China all of a sudden flooding the market with the US Treasuries they hold. However, what if the Fed buys them back directly?

Regular readers will know I’m concerned that the prospect of debt monetisation – where central banks print money to fund government spending – may loom somewhere over the horizon.

Things may however turn out to be more subtle than direct central bank debt purchases of government debt.

I’ll bring Jim Rickards into this discussion next week. He was having this exact discussion with no less than Walter Wriston forty years ago!