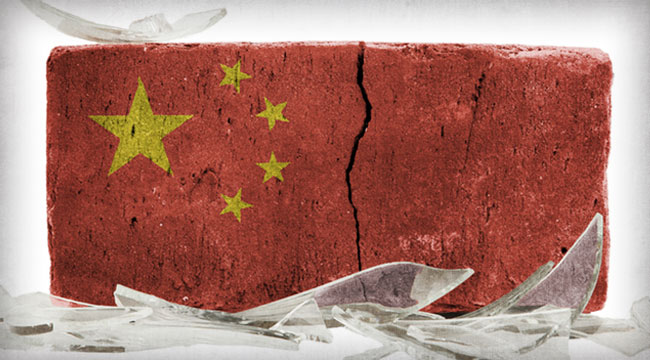 China is now facing the reality of a major slowdown in economic growth.  The Asian superpower was once hitting accelerating speeds not seen in the modern era.  Now it must brace for the real possibility of going broke.

Reuters first reported in December 2016 that Chinese reserves had plunged to a five-year low, hitting just over $3 trillion, while also recording a massive drop in its amount of gold reserve in October.  This reserve problem only compounds when under the threat of failing banks.

The country faces an insolvent banking problem brought on by the “off-balance sheet” issues caused by its wealth management products (WMPs).  These WMPs, or what has been described as shadow banking, could turn into a considerable problem for The People’s Bank of China.

Chinese leadership has already said that the $3.5 trillion WMP industry has been a source of risk, but maintains that the industry will stay “stable and orderly” in the event of a shock.  One survey found that delinquency rates in China’s less stable banking institutions to be at a whopping 30%, while still receiving injections from the Chinese central bank.

The risk combination of low reserve numbers and the need for a possible government bailout of banks maintaining WMPs adds considerable vulnerability in a Chinese government that is perceived by many foreign powers as an economic threat.

Many in the financial and political media reference the “Thucydides Trap” in which a rising power, out of fear of an already established global power, escalates toward war.  While this war drum between the U.S may have credibility, the truth is China could very well be hitting considerable economic walls – and simply not keep up.

China might be seeking to diversify its involvement in the U.S economy but is hitting considerable backlash by doing so.

As economist Nomi Prins indicated regarding China, “It established a stronger relationship and side agreements with Russia, the BRICS community and increasingly with Europe and the United Kingdom post the Brexit vote. That was no accident, but part of a strategy to be distanced from the risk the US and its central and private banking system poses.”

While this strategy of distancing from the U.S continues, China is experiencing an economic slowdown and a weakening outlook for 2017.

One Chinese central bank advisor, Huang Yiping, who is a member of the central bank monetary policy committee, indicated that as Chinese residents diversify their investment portfolio, capital outflow will “last only for a certain period” in future.

This optimism from the central bank might be a fitting policy narrative, but the reality shows a different picture in China.

The yuan continues to weaken and money has started to flow outwards from the once booming Asian giant.  The outflow of money has forced the yuan down a record 6.5% against the U.S dollar.  That is the largest currency drop from the Chinese currency since 1994.

A Stratfor report on the economic slowdown in China notes that, “By spending $1 trillion in foreign exchange reserves, Beijing has been able to buoy the yuan somewhat as it slowly depreciates, putting a sizable chunk of its spare cash toward reassuring the markets of its currency’s reliability.”

In 2015 alone China had an estimated $1 trillion leave the country through capital outflows.  While that number might have decreased in 2016 to just over $762 billion, it also met considerable government pushback that otherwise could have produced similar figures.

The government has since stepped in to control money exiting the country at record amounts.

As of January 2017 the administration responsible for Chinese foreign exchange regulation is now requiring its citizens to provide added information and sworn pledges that their personal funds will not be directed toward property investments.

One obvious threat to a banking crisis, weakening yuan and massive flight of capital from China is the negative impact on trade.  The not so obvious problem is that all of these could go off at once on a greater scale, causing economic tremors.

The actions from the Chinese government were meant to act as a floodgate in order to keep money domestically based and slow down the economic slump, but the history of preservation of wealth tends to extend beyond the rule of law.  Clampdowns and financial controls can only extend so far, confidence can only be regulated so much.

Jim Rickards offers his analysis that, “History shows that weak capital controls may be worse than no controls because they send a message of “no confidence” while not really stopping the outflows.”

“The mother of all liquidity crises is coming to China sooner than most realize.”