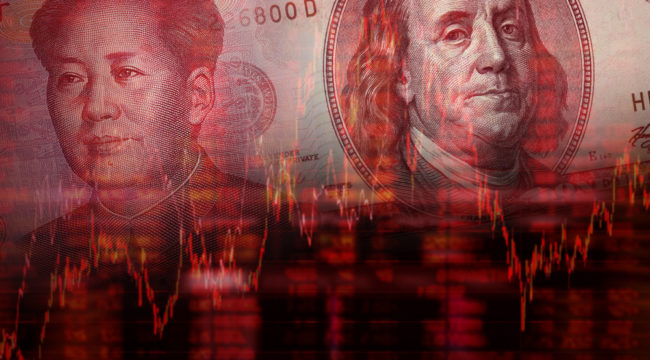 U.S. and China on Collision Course

China’s capital and currency markets are on a collision course with the U.S., and by extension, the entire world. Economists are fond of saying if something can’t go on forever, it won’t. That truism applies to China.

Huge profits will be made by those who see this China train wreck coming and act in time.

The idea of economic stress in China sounds strange to most ears. China has come from the chaos of the Cultural Revolution to the world’s largest economy measured on a purchasing power parity basis in just 35 years. Even using nominal GDP, my preferred metric, it is the world’s second largest economy.

But, beneath that glossy surface all is not well. Much of China’s growth was completely artificial. It would not be counted if China were subject to more rigorous accounting standards.

China’s growth consisted of about 45% investment. That compares with about 30% investment in developed economies. Investment is fine if the investments have positive expected returns and are not financed with excessive debt. But, China fails both of those tests.

Much Chinese investment is completely wasted on “ghost cities” (major metropolitan complexes that are completely empty). As well as white elephant prestige projects such as the multi-billion dollar Nanjing South train station with 128 mostly unused escalators. Assuming half of Chinese investment is wasted, then GDP should be reduced 22.5%. This turns 6.7% growth into 5.2% growth at best.

The situation gets even worse when you consider the amount of debt being used to finance this wasted investment. China’s bank assets have grown from about $2.5 trillion to $40 trillion in the past 10 years, a 1,500% increase. And that’s just the tip of the iceberg.

Most Chinese debt is “off the books” in so-called wealth management products (something like the CDOs that sank Lehman Brothers in 2008), and derivatives. China has a huge “shadow banking” system of provincial guarantees, inter-company loans and offshore transfer pricing schemes. When all of this debt is taken into account, China looks like the greatest Ponzi scheme in history.

If the situation is so unstable and overleveraged, why hasn’t it collapsed already? The answer is that China is the greatest currency manipulator of all time. China used a 35% “maxi-devaluation” of the yuan in 1994 to make its currency globally competitive and boost its exports. Then it used central bank intervention from 1994 to 2006 to keep its currency at that depressed level.

This 12-year currency manipulation enabled China to build its factories, create jobs, pile-up dollar surpluses and prop up its banking system. Of course, much of this growth came at the expense of U.S. manufacturing jobs that were being lost by the millions over this same period. Only after 2007 under intense U.S. political pressure did China allow the yuan to appreciate to a more reasonable level given its factor inputs and terms of trade.

Now China is again resorting to its currency wars playbook. Since 2014, China has allowed the yuan to devalue from 6.0 to 1 dollar down to 6.9 to 1 dollar. Right now the yuan is poised to break through the significant benchmark of 7.0 to 1 dollar.

The difference between now and 1994 is that the U.S. is paying attention. In particular, President-elect Donald J. Trump has threatened to label China a “currency manipulator” on his first day in office on January 20, 2017.

This escalation of currency wars tension comes at a time when there is heightened risk of a real war with China. Soon after his election, Trump received a congratulatory phone call from the president of Taiwan. That might seem like a routine courtesy, but not from the Communist Chinese perspective.

Beijing views Taiwan as a “breakaway province” and not a separate country. U.S. politicians usually tiptoe around this issue, but not Trump. He not only chatted with Taiwan’s president, but he questioned the U.S. “One China” policy in a tweet.

Trump’s actions set off alarms in Beijing. The Communist leadership decided to send Trump a message by stealing one of our Navy underwater drones operating in Philippine waters, nowhere near the disputed South China Sea waters claimed by China.

The underwater drone was later returned, (after Trump tweeted that the Chinese should “keep it”), but the point was made. Geopolitical tensions between China and the U.S. are definitely on the rise.

With China heading for a credit crisis, and U.S.-China political relations strained, what does this portend for the Chinese yuan and a budding currency war?

The first indication is that a new Chinese maxi-devaluation may already have begun. Of course, the Chinese will not move 35% at one time as they did in 1994. They are moving in small steps.

A 10% maxi-devaluation today, less than one-third of what China did in 1994, would send U.S. stocks plunging 30% in days at the prospect of an all-out trade war with China.

How likely is a new maxi-devaluation? It could be coming in a matter of weeks.

The reason the yuan has been going down lately is not government manipulation but capital flight. Wealthy Chinese are trying to get their money out of China as fast as they can because they fear a new maxi-devaluation is coming.

China has burned through $1 trillion of foreign exchange reserves in the past two years to accommodate the demand for dollars from this capital flight. China’s holdings of U.S. Treasury debt have crashed from $1.265 trillion in November 2015 to $1.115 trillion as of October 2016 according to U.S. Treasury data.

China’s overall reserves have fallen from about $4 trillion in 2014 to $3 trillion today. Of that amount, about $1 trillion is illiquid and another $1 trillion will be needed to bailout China’s banks in the coming credit crisis. That only leaves $1 trillion as a precautionary reserve to defend the yuan. China’s capital flight continues at about $100 billion per month. This means China will be broke in one year.

If China wants to avoid going broke, it only has three choices according to Mundell’s “Impossible Trinity.” It can raise interest rates to defend the currency, slap on capital controls, or devalue the yuan.

Interest rate hikes will kill the economy and accelerate the credit crisis. Capital controls will choke off new foreign direct investment and force capital flight into illegal channels without actually stopping it. A maxi-devaluation is the simplest and easiest way out of the box for China.

Why hasn’t China devalued already? Part of the reason is to avoid being labeled a “currency manipulator” by the U.S. This could cause retaliation in the form of tariffs. That is why China has been pursuing a slow, steady devaluation instead of a maxi-devaluation.

But, now Trump says he will label China a currency manipulator anyway. Perhaps with one of his “first day” executive orders as soon as he is inaugurated. If Trump does that, and he well may, then China has no reason to delay its maxi-devaluation because the U.S. will have taken away China’s only motivation to play nice.

The resulting currency and trade war will make the 11% stock market correction of 2015 look like a picnic. All global markets will be affected. The U.S. will suffer, but China will suffer more.