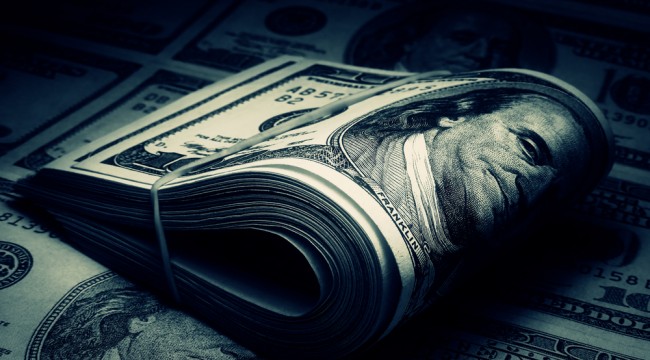 The Cassandras of doom have warned about it for years. And so it is finally coming to pass…

One blue day, they said, foreign central banks — primarily China’s — would start unloading their hoards of U.S. Treasury debt. Reams of dis-Oriented greenbacks, orphaned and paupered, would be turned out upon an unwelcoming world.

That would cause the dollar to plunge… interest rates to soar… and markets to free-fall.

If we had just one nickel for every time we heard that harrowing tale. Brother!

But the Cassandras prove it’s possible to be both right… and wrong.

True, the world’s central banks have been selling U.S. Treasuries at a galloping clip. As Jim Rickards notes, “The net selling applies not only to China, but also to Japan, Saudi Arabia and other large holders of U.S. Treasury debt.”

A chart, speaking a thousand words: 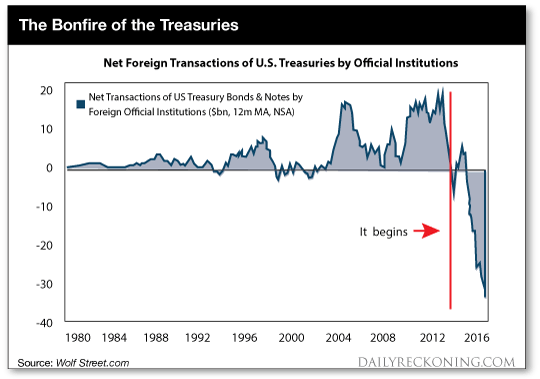 The trend is clear — and ominous. But why the selling?

The world isn’t unloading Treasuries to topple the dollar, as many Cassandras thought. No. The Chinas, Japans and Saudi Arabias of the world have more prosaic reasons for selling their Treasuries. Jim again:

China is dumping debt to prop up its currency. Saudi Arabia is dumping debt to cover its fiscal deficits resulting from the drop in the price of oil. Other smaller holders are simply diversifying out of dollars into euros and gold for prudential reasons.

Not only hasn’t the dollar crashed. It’s risen more than 25% against a basket of major currencies since the start of 2014.

And it takes a very expansive definition of the word “soaring” to describe U.S. interest rates: 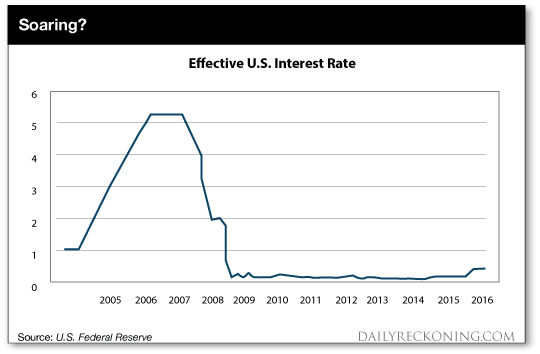 And those free-falling markets?

The Dow, S&P and Nasdaq run at record highs these days.

It turns out the world is hardly an unwelcoming place for orphaned dollars. In fact, most any orphaned dollar finds a loving home. Willing buyers have been on hand for the Treasuries China, Japan, Saudi Arabia and anyone else is selling.

According to data from Treasury International Capital (TIC), the public is snapping up about $70 billion of Treasuries a month. And foreign private investors increased their holdings by $233 billion between August 2015 and November 2016.

As Bloomberg reports, “To a large degree, official selling has been offset by private investors.”

And so the great Treasuries sell-off by foreign central banks hasn’t been the hell Cassandras thought. Much like all the money printing since 2008 hasn’t led to the hyperinflation many thought. Markets teach nothing if not humility.

Yet the story isn’t over. Maybe the Cassandras will have the last word after all…

Inflation is beginning to find its legs again. The latest report from the Bureau of Labor Statistics shows that year-on-year inflation runs at 2.5% — the largest gain since March 2012. Cleveland Fed President Loretta Mester said yesterday that inflation is “moving up, and the forecast says that’s going to continue.”

Inflation makes Treasuries a wasting asset. Depreciating dollars lower their value in real terms. So if inflation is gathering steam, it could trigger a fresh selling spree. Jim Rickards:

If U.S. inflation starts to take off and creditors begin to lose confidence in the value of U.S. dollar debt, the trend toward net selling of Treasuries could turn into a stampede.

The Fed would then have to raise interest rates — royally — to attract buyers. But that would kill the “recovery.” It could even plunge the economy into depression.

The other possibility is that the Treasury will secretly order the big U.S. banks to buy whatever Treasury debt foreign investors don’t want.

That “could work,” says Jim. “But it also means banks will have less room on their balance sheets for commercial lending.”

Commercial lending fuels the economic engine. So even if it “works,” it comes at a dear price. The iron laws of economics will have it no other way.

Either way, the curtain may be falling on the dollar standard. Will all those Treasuries end up back in foreign central banks one day? The trend suggests it’s unlikely. Revisit the chart above and form your own conclusion.

The world gets a new monetary system every 30 or 40 years. The last began in 1971 when Nixon closed the gold window and the world went on the dollar standard. But at 45 going on 46, that same dollar standard goes on borrowed time.

The only question is how much time.