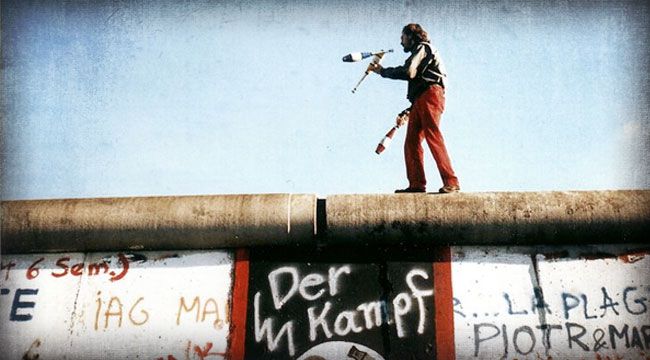 No Berlin Wall, No Problem: An Inside Look at the New Cold War

“A Pyrrhic victory” is how constitutional lawyer Bruce Fein describes the fall of the Berlin Wall.

Time flies — it was 25 years ago this Sunday. Ceremonies are already underway in Berlin today. As we write, the last leader of the Soviet Union is speaking to a crowd at “Checkpoint Charlie”… 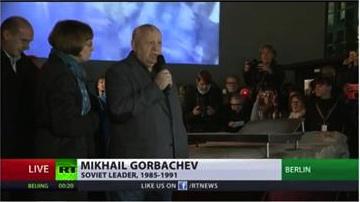 We’ll spare you the trouble of looking it up: Gorby is 83 now.

On the wall of your editor’s home office is a framed poster capturing that moment in time a quarter-century ago. I remember being so moved by the TV images — people with sledgehammers taking the wall down, chunk by chunk — I had to buy the poster when I saw it in a catalog a few months later. It’s come with me from place to place ever since.

So at first, it’s disconcerting to read Mr. Fein’s curious nostalgia for a superpower showdown. But after a few moments’ reflection, he has a point.

“The Cold War victory left the United States with no rival superpower to teach us daily what we were not,” Fein writes in The Washington Times.

“So we embraced practices emblematic of the Soviet Union, for instance, detention without accusation or trial or indiscriminate spying on citizens without warrants.

“The United States paradoxically came to resemble the global tyranny the Cold War was fought to defeat because of its Cold War triumph.” To say nothing of the “predictable gratuitous wars and spiraling national debt.”

And now, 25 years on… we Americans don’t even have the comfort of saying we’re the unchallenged “sole superpower.”

“You can like it or not. You can invest in it or not. But the new arms race is happening, and you owe it to yourself to understand the facts. Watch the world through this lens and many things will become clearer.”

The immediate cause is Ukraine. But events have been building up almost from the moment the Soviet Union collapsed.

“Russia,” Byron explains, “is responding to NATO encroachment eastward, to a Western-backed coup against the previous Ukrainian government (no matter how bad it was), to U.S.-NATO ships in the Black Sea and to constant Western military surveillance.

“Beyond Ukraine, however, we have a long string of events that unfolded since the breakup of former Yugoslavia in the early and mid-1990s. Think Serbia, Kosovo, Iraq, Afghanistan, Libya and more. Russians view these Western military expeditions as encircling moves.

“It’s not hard to make the case that, in the U.S., the Clinton-Bush-Obama administrations have walked (perhaps ‘sleepwalked’ is a better term) into serial buzz saws of confrontation, and Russia is but one aspect of the multidimensional competition that’s breaking out.”

“We didn’t start this,” said Russian President Vladimir Putin during a speech two weeks ago today.

“Putin listed a long series of U.S.-led military expeditions,” says Byron, “from the former Yugoslavia to Libya. Putin chastised the U.S. for taking a triumphal attitude when the Cold War ended, working to ‘reshape the world to suit [U.S.] needs and interests.’

“Putin was only warming up, however. He declared, ‘This is the way the nouveaux riches behave when they suddenly end up with a great fortune — in this case, in the shape of world leadership and domination. Instead of managing their wealth wisely… I think they have committed many follies.’”

“This is NOT your father’s Cold War,” Byron cautions; “it won’t be a simple replay of the first one.

“The next arms race will move into entire new levels of battle space. Land, sea and air, of course. Outer space too, but in ways far surpassing what we saw in the old U.S./NATO-versus-Soviet competition.”

To say nothing of cyber — what Byron calls the “fifth domain of war.”

And with both houses of Congress under Republican control, look for U.S. defense spending to grow, and grow big.

The new chairman of the Senate Armed Services Committee is none other than John McCain. He’s already letting in friendly reporters on his plans: “McCain said his first order of business as chairman,” reports The Daily Beast’s Eli Lake, “will be to end the budget rule known as sequestration, which requires the U.S. military to cut its budget across the board.”

Sums up Byron: “You don’t have to like the idea of a new level of great power confrontation, but at least you ought to get ready to deal with it.”

P.S.  We anticipated a big ramp-up in global defense spending two years ago… and Byron launched his Military-Tech Alert in response. The portfolio is sitting on open gains like 36% in a year… and 60% in 18 months. And as Byron explains, much bigger gains are yet to come. We gave our 5 Min. Forecast readers a unique chance to access Byron’s research for themselves in today’s issue. If you’d like to receive your chance a profitable services like this — as well as a daily rundown of the world’s most intriguing financial economic stories — we invite you to become a 5 Min. Forecast reader for yourself, right here.