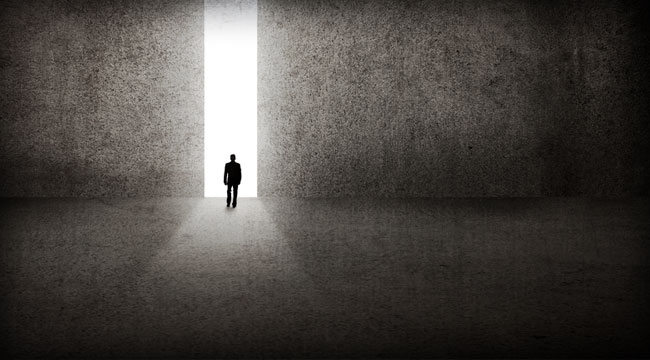 [Editor’s Note from Jim Rickards: The following article describes a fictional dystopia in the spirit of Brave New World or 1984. It is not a firm forecast or prediction in the usual analytic sense. Instead, it’s intended to provide warning, and encourage readers to be alert to dangerous trends in society, some of which are already in place. Thank you.]

As I awoke this morning, Sunday, Oct. 13, 2024, from restless dreams, I found the insect-sized sensor implanted in my arm was already awake. We call it a “bug.” U.S. citizens have been required to have them since 2022 to access government health care.

The bug knew from its biometric monitoring of my brain wave frequencies and rapid eye movement that I would awake momentarily. It was already at work launching systems, including the coffee maker. I could smell the coffee brewing in the kitchen. The information screens on the inside of my panopticon goggles were already flashing before my eyes.

Images of world leaders were on the screen. They were issuing proclamations about the fine health of their economies and the advent of world peace. Citizens, they explained, needed to work in accordance with the New World Order Growth Plan to maximize wealth for all. I knew this was propaganda, but I couldn’t ignore it. Removing your panopticon goggles is viewed with suspicion by the neighborhood watch committees. Your “bug” controls all the channels.

I’m mostly interested in economics and finance, as I have been for decades. I’ve told the central authorities that I’m an economic historian, so they’ve given me access to archives and information denied to most citizens in the name of national economic security.

My work now is only historical, because markets were abolished after the Panic of 2018. That was not the original intent of the authorities. They meant to close markets “temporarily” to stop the panic, but once the markets were shut, there was no way to reopen them without the panic starting again.

My work now is only historical, because markets were abolished after the Panic of 2018.

Today, trust in markets is completely gone. All investors want is their money back. Authorities started printing money after the Panic of 2008, but that solution stopped working by 2018. Probably because so much had been printed in 2017 under QE7. When the panic hit, money was viewed as worthless. So markets were simply closed.

Between 2018–20, the Group of 20 major powers, the G-20, abolished all currencies except for the dollar, the euro and the ruasia. The dollar became the local currency in North and South America. Europe, Africa and Australia used the euro. The ruasia was the only new currency — a combination of the old Russian ruble, Chinese yuan and Japanese yen — and was adopted as the local currency in Asia.

There is also new world money called special drawing rights, or SDRs for short. They’re used only for settlements between countries, however. Everyday citizens use the dollar, euro or ruasia for daily transactions. The SDR is also used to set energy prices and as a benchmark for the value of the three local currencies. The World Central Bank, formerly the IMF, administers the SDR system under the direction of the G-20. As a result of the fixed exchange rates, there’s no currency trading.

All of the gold in the world was confiscated in 2020 and placed in a nuclear bomb-proof vault dug into the Swiss Alps. The mountain vault had been vacated by the Swiss army and made available to the World Central Bank for this purpose. All G-20 nations contributed their national gold to the vault. All private gold was forcibly confiscated and added to the Swiss vault as well. All gold mining had been nationalized and suspended on environmental grounds.

The purpose of the Swiss vault was not to have gold backing for currencies, but rather to remove gold from the financial system entirely so it could never be used as money again. Thus, gold trading ceased because its production, use and possession were banned. By these means, the G-20 and the World Central Bank control the only forms of money.

Some lucky ones had purchased gold in 2014 and sold it when it reached $40,000 per ounce in 2019. By then, inflation was out of control and the power elites knew that all confidence in paper currencies had been lost. The only way to re-establish control of money was to confiscate gold. But those who sold near the top were able to purchase land or art, which the authorities did not confiscate.

Those who never owned gold in the first place saw their savings, retirement incomes, pensions and insurance policies turn to dust once the hyperinflation began. Now it seems so obvious. The only way to preserve wealth through the Panic of 2018 was to have gold, land and fine art. But investors not only needed to have the foresight to buy it… they also had to be nimble enough to sell the gold before the confiscation in 2020, and then buy more land and art and hang onto it. For that reason, many lost everything.

Stock and bond trading were halted when the markets closed. During the panic selling after the crash of 2018, stocks were wiped out. Too, the value of all bonds were wiped out in the hyperinflation of 2019. Governments closed stock and bond markets, nationalized all corporations and declared a moratorium on all debts. World leaders initially explained it as an effort to “buy time” to come up with a plan to unfreeze the markets, but over time, they realized that trust and confidence had been permanently destroyed, and there was no point in trying.

Wiped-out savers broke out in money riots soon after but were quickly suppressed by militarized police who used drones, night vision technology, body armor and electronic surveillance. Highway tollbooth digital scanners were used to spot and interdict those who tried to flee by car. By 2017, the U.S. government required sensors on all cars. It was all too easy for officials to turn off the engines of those who were government targets, spot their locations and arrest them on the side of the road.

In compensation for citizens’ wealth destroyed by inflation and confiscation, governments distributed digital Social Units called Social Shares and Social Donations. These were based on a person’s previous wealth. Americans below a certain level of wealth got Social Shares that entitled them to a guaranteed income.

Those above a certain level of wealth got Social Donation units that required them to give their wealth to the state. Over time, the result was a redistribution of wealth so that everyone had about the same net worth and the same standard of living. The French economist Thomas Piketty was the principal consultant to the G-20 and World Central Bank on this project.

By 2017, the U.S. government required sensors on all cars.

To facilitate the gradual freezing of markets, confiscation of wealth and creation of Social Units, world governments coordinated the elimination of cash in 2016. The “cashless society” was sold to citizens as a convenience. No more dirty, grubby coins and bills to carry around!

Instead, you could pay with smart cards and mobile phones and could transfer funds online. Only when the elimination of cash was complete did citizens realize that digital money meant total control by government. This made it easy to adopt former Treasury Secretary Larry Summers’ idea of negative interest rates. Governments simply deducted amounts from its citizens’ bank accounts every month. Without cash, there was no way to prevent the digital deductions.

The government could also monitor all of your transactions and digitally freeze your account if you disagreed with their tax or monetary policy. In fact, a new category of hate crime for “thoughts against monetary policy” was enacted by executive order. The penalty was digital elimination of the wealth of those guilty of dissent.

The entire process unfolded in small stages so that investors and citizens barely noticed before it was too late. Gold had been the best way to preserve wealth from 2014–18, but in the end, it was confiscated because the power elites knew it could not be allowed. First, they eliminated cash in 2016. Then they eliminated diverse currencies and stocks in 2018. Finally came the hyperinflation of 2019, which wiped out most wealth, followed by gold confiscation and the digital socialism of 2020.

By last year, 2023, free markets, private property and entrepreneurship were things of the past. All that remains of wealth is land, fine art and some (illegal) gold. The only other valuable assets are individual talents, provided you can deploy them outside the system of state-approved jobs.

P.S. Sign up to receive the Daily Reckoning email edition for free. It’s now the official way to stay up to date on Jim’s new writings and any developments in his newsletter, Strategic Intelligence. Sign up for FREE, right here.