5 Things To Watch For

New to the Daily Reckoning? Long-suffering reader? Either way, your time is valuable and there’s more to sift through online than ever before.

At the Daily Reckoning we’ve filtered through the noise and garbage so you don’t have to.

We want to begin bringing you 5 things to watch each week.  Starting Monday, these points will be brief in description and allow you to take on the news in review and know exactly what to watch for going forward.

“The People’s Bank of China set its daily reference rate for the yuan at 6.7008 against the U.S. dollar, a depreciation of 0.3% from its last fixing of 6.6778 on Sept. 30, before the National Day holiday. Monday’s fixing was the weakest level for the currency since September 2010.” As China has entered into the Special Drawing Rights (SDR) basket, or world money, this story a fast moving one.

“If the economy is truly getting better, that would be better for gold long-term,” said Paul.

“Short-term gold has taken a big hit and it could very well go down more, but it’s still up 10 percent from a year ago.”

For more on former U.S. Representative Ron Paul’s take on the elections and markets see the full interview here.

3. Draghi Points to 2019 as Time for Inflation Mission Accomplished (Bloomberg)

“While the Frankfurt-based ECB hasn’t met its own definition of its mandate on inflation since early 2013, an unprecedented wave of stimulus measures during Draghi’s tenure including the current asset-purchase pace of 80 billion euros per month ($90 billion) has helped keep the currency bloc away from outright deflation. Draghi’s comments imply that fresh staff forecasts due in December — which build-in the impact of current stimulus — will show a 2019 inflation rate in line with the goal.”

While the head of the European Central Bank, Mario Draghi might be overstretched and dreaming, catch the full Bloomberg take here.

After the most recent OPEC meeting in Algiers Bloomberg charted the following rise: 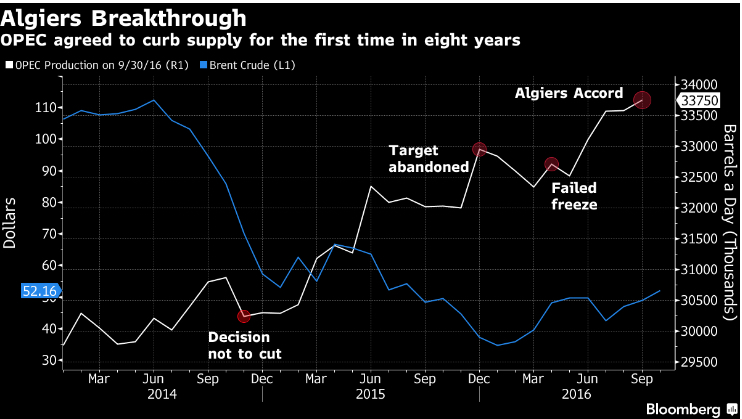 For more on the spike figures check them out here.

The IMF released its Fiscal Monitor for October 2016 titled “Debt – Use it Wisely” (find the full report here).

The Reuters report noted, “While the United States has de-leveraged since the 2008-2009 financial crisis, the report cited the buildup of private debt in China and Brazil as a significant concern, fueled in part by a long era of low interest rates.”

For more on on the trillions in worldwide debt that Reuters reported you can find it here.

Stay tuned for next weeks update.  Until then, we leave you with these wise words from best selling author and economist, Jim Rickards:

McCartney told fun story of seeing Hendrix mess-up his guitar live. "Once you're out of tune, there's no way back." Sounds like the #Fedpic.twitter.com/oe2yBw38Kp