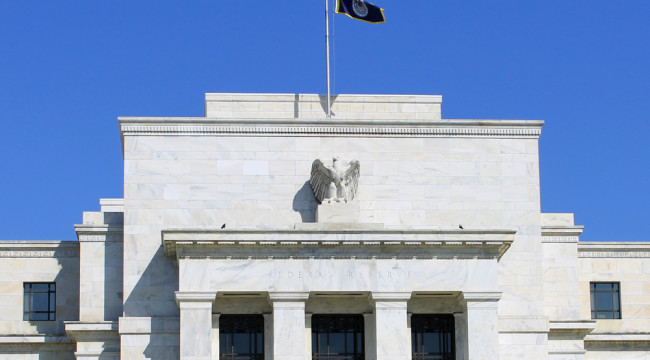 Markets eagerly awaited the August U.S. employment report that came out on Friday, Sept. 4. This was the last important piece of economic data to be revealed before the Federal Reserve’s FOMC interest rate policy meeting on Sept. 17.

It has been widely anticipated that the Fed would finally raise interest rates at that meeting for the first time in over nine years — the so-called “liftoff.”

But the liftoff is surrounded by a contentious debate. Powerful voices such as former Treasury Secretary Larry Summers, and IMF Chief Christine Lagarde have been warning Fed Chair Janet Yellen that the global economy is too weak to bear interest rate increases. That debate — to raise, or not to raise — includes many advocates on both sides.

As we tick closer to Sept. 17 the picture is more muddled than before the jobs report. The Fed is truly on the knife-edge of raising rates — or possibly not. Markets are more uncertain than ever.

In these pages, we don’t get too worked up over a single data point. Instead we input the new data to a model based on a working hypothesis of capital market dynamics.

Our approach is to view the latest data as part of a time series to see where events are leading. In these pages on Aug. 11, we showed an employment chart with a sharply declining rate of job creation beginning late last year.

We wrote the following: “If the negative momentum continues, we may see only 195,000 jobs created in August. That alone will kill the chances for a September rate increase.” Here’s an updated version of that chart from Aug. 11, including the newly released August jobs report: 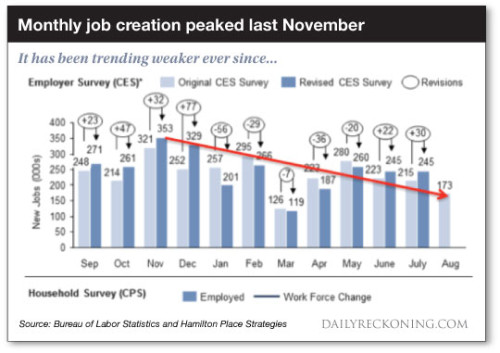 The negative slope of job creation not only continued, it got worse. Our Aug. 11 forecast, using indications and warnings, was considerably more accurate than the consensus of Wall Street analysts on the day before the report.

On Sept. 3, the Wall Street consensus was 220,000 jobs. On Aug. 11, three weeks earlier, our forecast was 195,000 jobs. The actual number was 173,000 jobs. As you can see, our models are more accurate than Wall Street with much greater lead-time for investor action. This is the benefit of our analytic method.

The employment report did lower the current unemployment rate to 5.1% from 5.3% the month before. This effectively hits Janet Yellen’s target forecast rate of 5.0%, and “checks the box” on one of her three targets.

But, part of the reason the unemployment rate dropped is that the labor force declined by 14,000 people, and labor force participation remained at all-time lows. Those are not signs of a thriving jobs market.

The other two Yellen forecast targets are growth of 2.5% and inflation of 2%. Here the story is not good. Growth for the first three quarters of 2015 is coming in below 2%, and trending down. Inflation year over year, using the Fed’s favored indicator, is 1.2%, and is also trending down.

So the data are a mixed bag. Some signs might support a rate increase, but on balance the overall picture is still one of weakness. Raising rates in a weak environment would send the dollar soaring, and import deflation from abroad (in the form of lower import prices due to the strong dollar).

This pushes Yellen further away from her inflation goal. My expectation is the Fed will stand pat and not raise rates in September, but this is admittedly a closer call than it has been all year.

There are three possible outcomes in our “probability cloud” for the Sept. 17 Fed FOMC meeting:

This would be a policy blunder given the weak global and U.S. growth environment, but it could happen. The result would be a strong dollar, capital flight from around the world to U.S. markets, collapsing emerging markets currencies and stocks, bankruptcies of dollar-denominated foreign corporate borrowers and possible contagion and global panic.

I don’t expect the Fed to raise rates, but it cannot be ruled out. The fact that they might raise is a good reason to reduce long stock positions and increase cash just in case.

Possible Outcome #2: The Fed does not raise rates, but continues to “talk tough” about a rate increase.

This is more of the same. Markets would see the same volatility they have seen since early August, without the benefit of actually having the decision behind us.

Wall Street has been moving the goalposts all year. Late in 2014, Wall Street said the Fed would raise rates in March 2015. Then June. Then September. If the Fed does not raise rates in September, the talk will immediately turn to the December meeting.

But, the Fed might hint at an October rate increase. Last spring, Yellen said that markets should not rule out a rate hike at a meeting with no press conference. The Fed went so far as to rehearse an impromptu teleconference with journalists. The teleconference technique allows the Fed to explain its policy moves even without a formal press conference. Given the Fed’s eagerness to raise rates, and determination to communicate that we may see such an “October Surprise.”

Possible Outcome #3: The Fed does not raise rates, and hints at some easing action.

This is the best policy option, but the one least likely to be used. Even at the zero bound the Fed is not out of bullets. They could start QE4, issue forward guidance, go to negative interest rates, re-enter the currency wars or issue helicopter money to finance larger deficits. These options could increase inflation and nominal growth, even though they would do little or nothing to help real growth.

Balancing the risks, the Fed is most likely either to tighten or threaten to tighten sooner than later (I expect the latter). Coming in a weak growth environment, this can only encourage deflation in the U.S. and foreign capital flight to U.S. markets.

The biggest beneficiary of both trends is U.S. government securities. Longer maturities, such as 30-year bonds, are the most volatile, but also offer the most upside potential if rates fall on deflation fears. (In bond math, lower rates equal higher bond prices, which produce capital gains on the bonds themselves in addition to coupon interest).

There could be a monster rally in longer maturity U.S. government securities. It’s a volatile bet that could backfire if the Fed surprises markets with dovish talk. And if economic weakness continues, eventually the Fed will turn dovish. But in our estimation, that is probably months away. We’ll be watching closely for an abrupt shift by the Fed.

For now, longer maturity U.S. government bonds look like the best way to profit from the Fed’s position on the knife-edge of policy, and what could be an historic blunder.