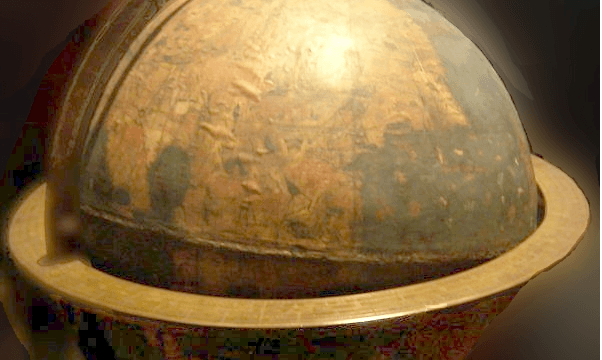 The Key to Understanding Stocks, Currencies, Commodities and Cash

Understanding how U.S. and Chinese monetary policies are now joined at the hip, and what this means for the entire world, is the key to understanding the global slowdown affecting stocks, currencies, commodities and even the real value of cash.

This chain of relationships has numerous links. Let’s explore them one by one.

Yellen makes no secret of her desire to raise U.S. interest rates. She talks about this every chance she gets in speeches, press conferences and interviews. Rates have been zero for almost seven years, and it has been nine years since the last time the Fed raised rates.

This has led to endless speculation about the timing of the Fed rate increase. In late 2014, Wall Street said March. Then June. Now September. So far, Wall Street got it wrong every time.

We don’t engage in strung-out speculation on the Fed’s next move. We use specific indications and warnings and proven analytic methods used by the intelligence community including the CIA to solve problems of this type.

The indications and warnings arrive daily in the form of data. That data have to be put into an analytic framework or model. The good news is that Janet Yellen gave us the model we need — she showed us her playbook!

The Yellen playbook was revealed in a speech she gave in Providence, Rhode Island on May 22, 2015. This was reported under headlines that read, “Yellen to Raise Rates This Year.”

But that’s not what she actually said. Her speech said three things:

3) She will not wait until she hits those targets. She will act a bit early if data are trending toward them.

What about the data? You probably heard last Friday that the jobs report was strong and keeps the Fed on track for a rate increase in September. Don’t believe it.

Look at this chart below. It shows that job creation peaked last year and has been on a downtrend ever since. The July unemployment rate hit 5.3%, which is close to Yellen’s trigger point, but it was 5.3% in June also, so there’s no momentum toward her goal.

On the unemployment front, the data are neutral at best. If the negative momentum continues, we may see only 195,000 jobs created in August. That alone would kill the chances for a September rate increase. 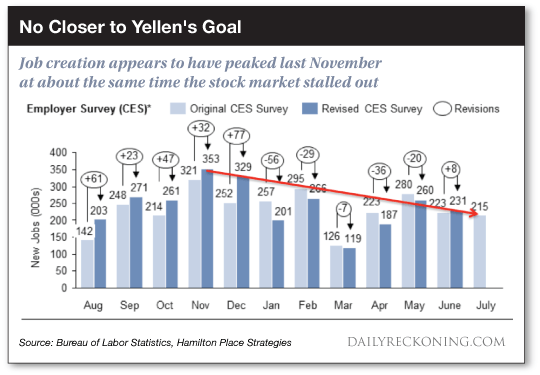 What about growth? Data are moving in the wrong direction there also. Second-quarter GDP growth was 2.3%, right at Yellen’s trigger point. But it was only 0.6% in the first quarter, so growth for the entire first half of 2015 is only about 1.5% at an annualized rate.

Worse yet, the Atlanta Fed GDP tracker is showing 1% growth for third-quarter GDP as of Aug. 6. That indicator could improve (it did last quarter), but at about the midpoint of the third quarter, it looks like growth is decelerating quickly. There’s nothing in the available growth data that shows a trend toward 2.5% growth.

The last part of Yellen’s trifecta is inflation. Here the data are unambiguous — they’re moving the wrong way from Yellen’s perspective. The latest reading on personal consumption expenditures (the Fed’s preferred measure) shows a year-over-year increase of just 0.3%, not even close to the 2.0% target.

In fact, the Fed has missed its target for 38 straight months. Other inflation measures are showing the same trend. Soon deflation may be more of a worry than inflation.

Yellen has painted herself into a corner with no escape. She’s talking tough on raising rates at a time when the U.S. economy is slowing. The tough talk makes the dollar stronger, which is deflationary. This pushes Yellen further away from her inflation goals.

The time to raise rates was 2009-2012. Bernanke blundered by not doing so. The Fed missed an entire rate cycle. If they had raised then, they could cut now. But they didn’t, and they can’t.

Why does any of this affect China? The answer is that China has ambitions to join the world money basket printed by the International Monetary Fund (IMF). This world money is called the special drawing right (SDR).

The U.S. controls entry to the SDR basket. In effect, the U.S. has insisted that China peg the yuan to the U.S. dollar in exchange for the U.S. allowing China into the SDR.

The problem with that is when you peg your currency to another country, you outsource your monetary policy to that other country’s central bank. If the Fed tightens (or even talks about it), China has to tighten to maintain the peg.

The bottom line is that Yellen has caused the U.S. and China to tighten policy at a time when both should be easing. The U.S. and China are the world’s two largest economies, producing about 30% of global GDP. China broke the dollar peg this week out of desperation, but the damage to its growth has already been done.

Yellen’s forecast is in tatters, and her tough talk is slamming the brakes on global growth. This is as close to lunacy as central banking ever gets.

Yellen may not understand what she is doing, but markets do. The deflationary dynamic caused by the Fed is showing up in the 1,000-point decline in the Dow Jones index in the past three months, 60% declines in many commodity prices and record plunges in emerging-market currencies from Brazil to Turkey and Malaysia.

You should look for investment ideas that are not limited to just one theme but that are affected by the multiple connected forces moving the global economy. When the Fed takes aim, someone is always in the cross hairs.