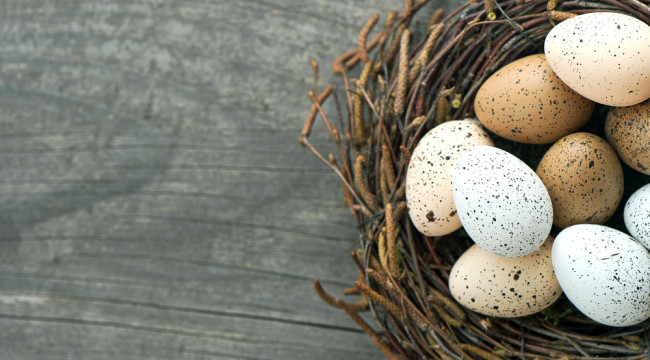 Remember Enron? You probably saw the documentary. A bunch of crooks at what was then one of the largest firms in the world.

The firm used creative accounting and outright fraud to hide huge debts and heavy losses on its trading businesses.

Once the scam became evident in 2001, Enron quickly went from being one of  the largest corporations in America to being one of the biggest debacles in history.

More than 20,000 employees were thrown out on the streets. The stock dropped from $90 to $0. More than $60 billion in shareholder value vanished. Poof, gone!

Thousands of investors and employees that had big chunks of their retirement savings in the stock were wiped out.

People like Charles Prestwood, a pipeline operator who had been with Enron since day one.

After retiring in 2000 with a portfolio worth $1.3 million, he thought he was set for life. But his life savings (and retirement dreams) evaporated during the collapse.

“All those dreams are gone now. I’ve lost everything I had. I’m just barely surviving.”

Something very similar happened when the Dot Com bubble burst … and when Lehman Brothers went under in 2008 … or when gold stocks plunged from 2011 to 2015.

Even though these are completely different scenarios and times in history, there’s one thing in common….

Everyone failed to cut their losses and ended up losing everything.

I’m sure you have seen this happen to you before.

You’ve held on to a losing position for too long because you’re telling yourself: “Maybe if I leave it alone it will go back up. I just need to be patient.”

That’s just the way our brains are wired. We are still cavemen in many ways.

We quickly take profits from our winners on the assumption that the profits won’t last so we better get them now.

And we tend to hold on to a loser in the hope it will bounce back—even though we have no evidence for that belief.

Dalbar, a Wall Street research firm, reports that the average investors earned just 3.17% from equity funds from 1990 through 2009.

Investors failed to match the S&P largely because they are emotionally all over the map. They take profits too soon, and hold on to losers for too long.

In other words, YOU are your nest egg’s worst enemy.

If your emotions get the best of you (which is easy to happen when money is involved), you will make really dumb decisions. Guaranteed.

That’s why it’s important to use a trend following system, like the one we use in Trend Following with Michael Covel.

Even the so-called “smart money,” big institutional investors, fall into these emotional traps.

Below, my friend Meb Faber shows why institutional investors aren’t that rational after all.

On of the popular celebrity magazines has a feature called “Stars, they’re just like us!” It shows photos of celebs doing such mundane activities as getting coffee at Starbucks and going on walks with their babies.

There is a genuine fascination with celebrity culture (believe me I live in LA), mainly because many of these celebs have attained status, wealth and fame, what many are seeking.But reality is much more dull, and most celebs face the same struggles and life challenges as everyone else.  And research has shown that in general, after a basic livable wage, happiness doesn’t increase that much with money (and especially fame).

Retail investors get a terrible rap (though mostly deserved) for their terrible behavior.  Graphics like the below from AdvicePeriod demonstrate that individuals are terrible at timing their investments largely due to emotions of fear and envy. 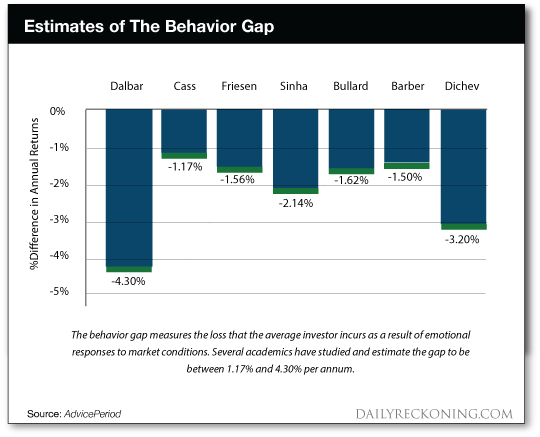 But are institutions any better?  One of the biggest misconceptions in our industry is that investors with a lot of assets are better investors.

In fact, they often do similarly dumb things that retail investors do, just with fancier names and the backing of committees.

Every journalist asks on every call “What is your Asset Under Management?” as if that acts as the final validator of your ability.  If this were true, many shops that manage in the billions and charge 2% for nothing wouldn’t have any assets.

Just try to find performance numbers on some Registered Investment Advisor sites, it is impossible.

I go to a lot of institutional conferences and while the themes change there is one constant – herding and chasing performance.

In the early 2000s it was moving away from market cap indexes (and tech!) and back toward value.

In the mid 2000s it was allocating to real assets to protect against coming inflation and rising interest rates.

In late 2000s it was tail risk and tactical strategies. In early 2010s it was risk parity, and then low vol and alternative yield assets and MLPs, followed by angel investing and FX hedging now.  What’s next?

See a theme?  If you don’t believe me, look at the below graphic (via Vanguard via A Wealth of Common Sense).  It shows 8,800 hiring decisions by 3,400 plan sponsors.

They just chase performance.  They fire managers that do poorly, then allocate to managers that have done well, who then go on to do poorly.  It is a never-ending treadmill. 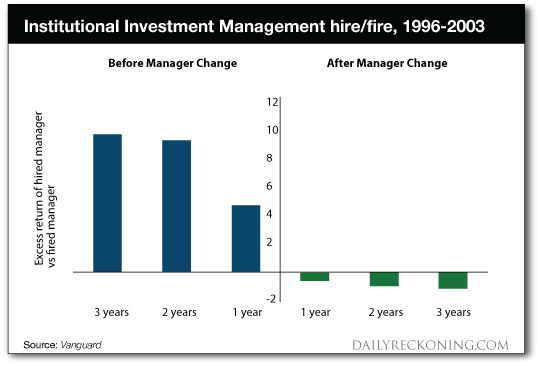 If you read my book Global Asset Allocation you know that your asset allocation doesn’t matter much over long periods.  But it matters a ton over short periods.

Meaning, it can diverge quite a bit over 5-10 years but over 40 all of the allocations grouped within 1% compound annual growth rate (CAGR) of each other.  The best and worst strategies from my book diverged by 50 percentage points in the 1970s.  The worst allocation would have been fired, and the best garnered all the assets.

But what if you picked the top allocation per decade for the next decade, how would that do?

It would reduce your return by 1.5% per year, more than the spread of the best performing allocation vs. the worst.

So don’t look to the talking heads and institutions for help, they’re just like us.

Meb Faber
for, The Daily Reckoning

How to Stop “Fake News” From Blowing Up Your Portfolio

Michael Covel reveals the best way to protect your investments from the dangerous epidemic of media misinformation. Read on…