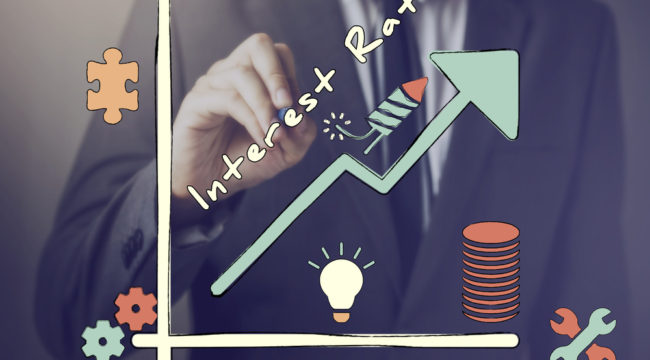 After holding off on an interest rate hike pre-election to help Clinton, Yellen finally pulled the trigger on Wednesday…

For the first time in a year, the Federal Reserve raised the federal funds rate a quarter of a percentage point to 0.50%.

The stock market game didn’t like the news. The Dow Jones closed down 118 points for the day.

And predictably, market “experts” drew all the wrong conclusions from the Fed’s move.

The rate hike wasn’t a surprise. Everyone with a pulse knew it was 100% priced in beforehand.

But what did shock and unnerve assorted “analysts” were the Fed’s rate projection talking points for 2017.

Now, a plurality of the Fed’s rate-setting committee believes the central bank will raise rates three times next year, compared with two hikes expected in the batch of projections released in September.

And it caused gold to take it on the chin, hitting a 9-month low. (The dollar is more attractive in times of rising rates as it’s an interest-bearing asset, as opposed to gold.)

But let’s unpack this…

The negative market reaction happened because the Fed indicated it anticipated raising rates three times in 2017 instead of its previous statement of two.

Well, after the Fed raised interest rates for the first time in a decade in December 2015, Fed politicians projected four hikes for 2016. But there was only one. Not even close.

Knowing this, who in their right mind would pay attention to such forward “guidance” for next year, or any year for that matter?

Yeah, not so much…

To see how misleading the Fed’s interest rate hike projections have been in recent years, have a look at the chart below. 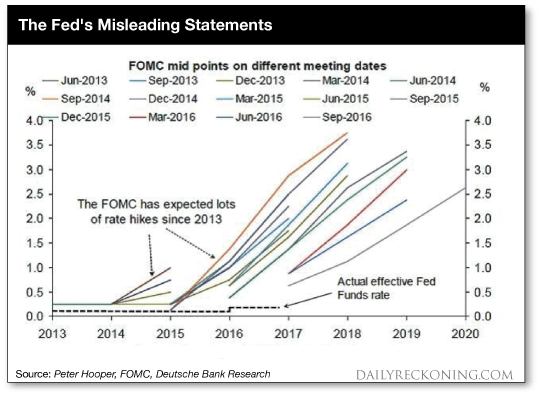 I don’t know what’s worse… the Fed’s forward guidance track record or the people who actually trade on that guidance.

Yet there I was on Wednesday night watching a Harvard-educated “analyst” on Fox News telling “Special Report” anchor Brett Baier that the most important thing investors needed to be concerned with was the Fed’s plan to raise rates three times in 2017.

Hold on. I am being kind.

The data clearly shows that the Fed doesn’t do what is says it’s going to do.

Look, does anyone not sniffing bath salts believe the Fed is going to continue raising rates on schedule if the U.S. stock market craters… or if Europe implodes… or if China’s credit bubble bursts?

There are countless Fed “variables” it will use to justify altering its plan… as it has in years past.

The bottom line is the only thing of value we learned from the Fed this week is they raised rates on Wednesday.

Worrying about the implications of the Fed’s rate hike timetable is a time-sucking charade designed to bleed you dry. The Fed and the media are never on your side.

Focus on the only truth you know, and that is the price action of all markets.

Let the price action dictate your actions, your buys and sells. That’s what winners do.