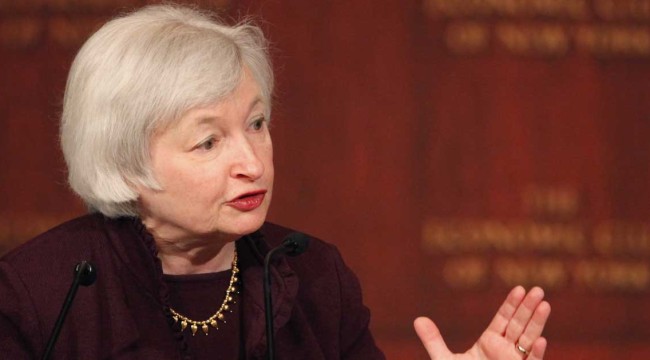 Simple Janet has attained a new milestone as a public menace with her speech to the Economic Club of New York. It amounted to yelling “stay” in a burning theater!

The stock market has been desperately trying to correct for months now because even the casino regulars can read the tea leaves. That is, earnings are plunging, global trade and growth are swooning and central bank “wealth effects” pumping has not trickled down to the main street economy. Besides, there are too many hints of market-killing recessionary forces for even the gamblers to believe that the Fed has abolished the business cycle.

So by the sheer cowardice and risibility of her speech, Simple Janet has triggered still another robo-trader spasm in the casino. Yet this latest run at resistance points on a stock chart that has been rolling over for nearly a year now underscores how absurd and dangerous 87 months of ZIRP and wealth effects pumping have become.

As we have indicated repeatedly, S&P 500 earnings—–as measured by the honest GAAP accounting that the SEC demands on penalty of jail——-have now fallen 18.5% from their peak. The latter was registered in the LTM period ending in September 2014 and clocked in at $106 per share.

As is shown in the graph below, the index was trading at 1950 at that time. The valuation multiple at a sporty 18.4X, therefore, was already pushing the envelope given the extended age of the expansion.

Indeed, even back then there were plenty of headwinds becoming evident. These included global commodity deflation, a rapid slowdown in the pace of capital spending and the vast build-up of debt and structural barriers to growth throughout China and its EM supply train, as well as Japan, Europe and the US.

In the interim it has all been downhill on the profit and macroeconomic front. By the March 2015 LTM period, S&P reported profits had dropped to $99per share and have just kept sliding, posting at only $86.44per share for the December 2015 LTM period just completed.

So there you have it. The casino has actually been trying to mark-down the Bubble Finance inflated stock prices that the Fed’s wealth effects lunacy has generated since the great financial crisis. Yet our Keynesian school marm and her posse just keep finding one excuse after another to feed the algos.

Indeed, Yellen had barely ambled up to the rostrum, and they had the market back up to 2065. After Friday’s further bump to 2072, the math of that is a round 24X earnings.

That’s right. With ample evidence of financial risk and bubbles cropping up everywhere during the past 18 months, Simple Janet stood there at the New York Economics Club podium and threw the robo-traders a big sloppy wet one! 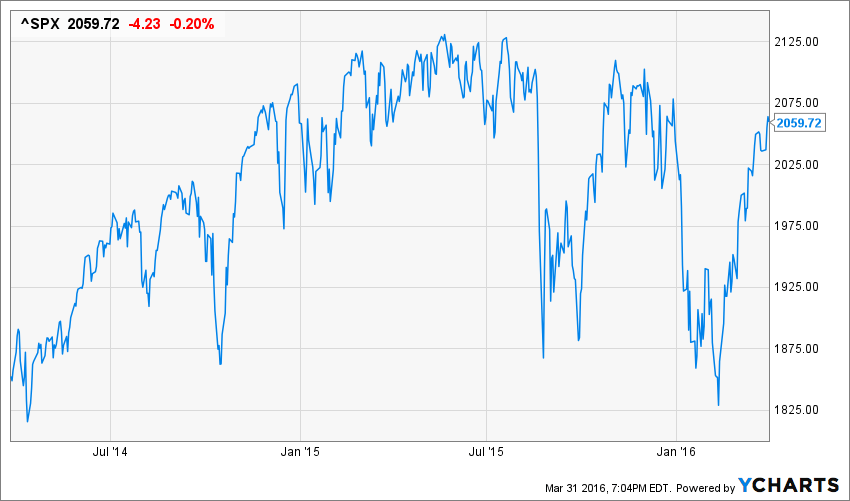 Let’s cut to the chase. You can not get more clueless or irresponsible than that.

Even if you take the Humphrey-Hawkins mandate as literally and mechanically as the creationists read the scriptures, the Eccles Building should have declared “mission accomplished” long ago. After all, by the writ of the BLS itself, unemployment is at the historical 5.0% full-employment marker and core CPI is at 2.3% and rising.

But Simple Janet is willing to nit-pick even the phony Humphrey-Hawkins targets to the second decimal place because she apparently has no idea that a 38 bps money market rate is not a pump toggle on some giant bathtub of GDP; it’s an ignition fuse that is fueling the greatest speculative mania in modern history.

The longer the Fed perpetuates today’s massive 24X bubble with soporific open mouth interventions like Yellen’s pathetic speech last week, the more violent and traumatic the risk asset implosion will ultimately be. You would think our monetary politburo might at least notice that after trading in no man’s land between 1870 and 2130 on the S&P 500 for the past 700 days, the casino is positioned exactly where it stood in 2007 and 2000. 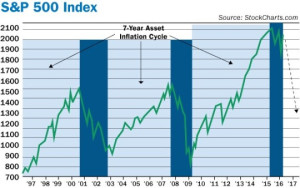 But Simple Janet is lost in a time warp. The 1960’s notion that the US economy is a closed bathtub in which inflation, unemployment and all of the other crude, ill-measured macro-variables on Janet’s dashboard can be mushed around by central bank injections of ethers called “aggregate demand” and  “financial accommodation” was not true even back then.

It was also never true that the financial market is merely a neutral transmission channel to the main street economy that can be used as a pumping device to manage GDP and the dual mandate variables embedded in it.

In fact, financial markets are the delicate mainspring of the entire capitalist economy. The nuances of pricing in the money and debt markets, the exact shape of the yield curve, the cost of carry and maturity transformations, the price of options and hedging insurance, capitalization rates on earnings and cash flows and much more are what actually enable sustainable growth, real wealth creation and financial stability.

But the blunderbuss Keynesians who have taken control of the Fed and other central banks lock, stock and barrel are clueless. Their massive, chronic, heavy-handed intrusions in financial markets have falsified all prices and turned the financial markets into incendiary gambling casinos. There is no true price discovery left—-just an endless cycle of speculation and front-running that eventually reaches a breaking point and implodes.

We are there now. Yellen and her band of Keynesian pettifoggers insist on perpetuating the bubble because they fear a hissy fit in the casino, but pretend to justify their dithering by reference to the “incoming data”.

Thus, in her New York speech Yellen mentioned three risks that purportedly justified the Fed’s decision to punt at the March meeting. The most preposterous was that growth in China is slowing and there is uncertainty about how it will handle the transition from exports to domestic sources of growth.

China is a madcap $30 trillion credit bubble waiting to fracture and bring the world economy down for the count with it. I have actually been in China for the last 10 days and the evidence that this giant construction site will soon grind to a stop is palpable. I will report more on this state made disaster next week.

But the very idea that the Fed would base a decision to delay normalization of money market rates after 87 months of ZIRP because the China credit binge is finally cratering speaks volumes. It proves that the Eccles Building is inhabited by monetary crackpots who cannot even recognize a giant Ponzi scheme when it is starring them in the face.

Likewise, Yellen unaccountably cited a second risk to the economic outlook that justifies deferral of rate normalization. Namely, that the potential for further commodity and especially oil price weakness could have “adverse” effects on the global economy.

Of course there is going to be much more carnage in the oil patch. After all, a decade of coordinated money printing by most of the world’s central bank eventually generated spectacular levels of excess capacity and malinvestment in the global oil and gas patch.

To wit, between 2004 and 2014 total debt of the global oil and gas industry nearly tripled, rising from $1.1 trillion to nearly $3 trillion. And that was not the free market at work, or proof that “drill baby drill” had anything to do with an upsurge of technological innovation and enterprenurial spirits.

Instead, the current massive overhang of surplus stocks and excess production capacity is owing to the drastic mispricing of capital and the temporary bubble in petroleum demand that pushed prices into an artificial and unsustainable triple digit range. Accordingly, the present oil price collapse is just getting started. It will be subtracting from CapEx and production levels in the US and around the world for years to come.

Finally, Yellen offered a third excuse, and it was a real whopper. In effect, she said that after nearly 100 months of “extraordinary” monetary policies the Fed dare not risk another recession because it stranded itself on the zero bound and has no dry powder remaining to counteract the next downturn.

Does this ship of fools domiciled in the Eccles building really believe they have abolished the business cycle? By the sound of the following, there is no other conclusion possible.

I consider it appropriate for the committee to proceed cautiously in adjusting policy,” Yellen said Tuesday. “This caution is especially warranted because, with the federal funds rate so low, the FOMC’s ability to use conventional monetary policy to respond to economic disturbances is asymmetric.”

Yes, Yellen is not only guilty of yelling “stay” in a burning theater. Speaking to the Wall Street speculators assembled at the Economic Club of New York, she actually threatened to keep the carry trade gambles in free money until they finally blow the place sky high for the third time this century.