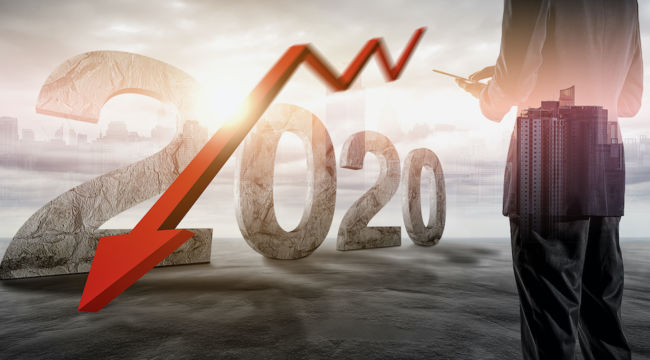 The stock market had another big day today, spurred by the Fed’s massive recent liquidity injections.

But you really shouldn’t be terribly surprised by the rally. Even the worst bear markets see substantial bouncebacks. And you can expect the market to give back all of its recent gains in the months ahead as the economic fallout of the lockdowns becomes apparent.

This bear market has a long way to run. And we could actually be looking at the worst recession in 150 years if one economist is correct. Let’s unpack this…

My regular readers know I have a low opinion of most academic economists, the ones you find at the Fed, the IMF and in mainstream financial media.

The problem is not that they’re uneducated; they have the Ph.D.s and high IQs to prove otherwise. I’ve met many of them and I can tell you they’re not idiots.

The problem is that they’re miseducated. They learn a lot of theories and models that do not correspond to the reality of how economies and capital markets actually work.

Worse yet, they keep coming up with new ones that muddy the waters even further. For example, concepts such as the Phillips curve (an inverse relationship between inflation and unemployment) are empirically false.

Other ideas such as “comparative advantage” have appeal in the faculty lounge but don’t work in the real world for many reasons, including the fact that nations create comparative advantage out of thin air with government subsidies and mercantilist demands.

Not the Early 19th Century Anymore

It’s not the early 19th century anymore, when the theory first developed. For example, at that time, a nation that specialized in wool products like sweaters (England) might not make the best leather products like shoes (Italy).

If you let England produce sweaters and Italy make shoes, everybody was better off at the end of the day. It’s a simple example, but you get the point.

But in today’s highly integrated and globalized world, where you can simply relocate a factory from one country to the next, comparative advantage has much less meaning. You can produce both sweaters and shoes in China as easily as you can produce them in England and Italy (and much more cheaply besides).

There are many other examples of lazy, dogmatic analysis among mainstream economists, too many to list. Yet there are some exceptions to the rule.

A few economists have developed theories that are supported by hard evidence and do a great job of explaining real-world behavior. One of those economists is Ken Rogoff of Harvard.

The Worst Recession in 150 Years

With his collaborator, Carmen Reinhart and others, he has shown that debt-to-GDP ratios greater than 90% negate the Keynesian multiplier through behavioral response functions.

This is the reality behind the phrase “You can’t borrow your way out of a debt crisis.” It’s true.

Meanwhile, the U.S. debt-to-GDP ratio was about 105% even before the crisis. It’s only going higher. We’re just digging a deeper hole for ourselves.

So when Ken Rogoff talks (or writes), I listen. In his latest article, Rogoff offers a dire forecast for the recovery from the New Depression resulting from the COVID-19 pandemic.

He writes, “The short-term collapse… now underway already seems likely to rival or exceed that of any recession in the last 150 years.”

That obviously includes the Great Depression and many other economic crises.

This is something you should really consider before you decide the coast is clear and it’s time to jump back into stocks.

Zooming out a bit, and as I’ve argued before, the pandemic is a prime example of complex systems colliding into one another…

Analyzing the operations of one complex dynamic system is difficult enough; most analysts can’t do it because they’re using the wrong paradigms.

And this crisis is the blackest swan most people alive today have ever seen, especially if Rogoff’s insight is correct — 150 years is a very long time.

That’s not to minimize in any way recent events like 9/11 or the 2008 financial crisis. Both were devastating. But neither led to a virtual lockdown of the entire economy like we’re seeing now. The current crisis simply has no precedent.

What we’re seeing is a full-fledged global contagion.

Let’s discuss the word “contagion” for a minute because it applies to both human populations and financial markets — and in more ways than you may expect.

There’s a reason why financial experts and risk managers use the word “contagion” to describe a financial panic.

Obviously, the word contagion refers to an epidemic or pandemic. In the public health field, a disease can be transmitted from human to human through coughing, shared needles, shared food or contact involving bodily fluids.

An initial carrier of a disease (“patient zero”) may have many contacts before the disease even appears.

Some diseases have a latency period of weeks or longer, which means patient zero can infect hundreds before health professionals are even aware of the disease. Then those hundreds can infect thousands or even millions before they are identified as carriers.

In extreme cases, such as the “Spanish flu” pandemic of 1918–20 involving the H1N1 influenza virus, the number infected can reach 500 million and the death toll can run over 100 million.

It can begin with one bank or broker going bankrupt as the result of a market collapse (a “financial patient zero”).

Still, the comparison between medical pandemics and financial panics is more than a metaphor.

Get Ready for Social Disorder

Yet even this three-system analysis I just described (pandemic > economy > politics) does not go far enough. The next phase has been little noticed and less discussed.

It involves social disorder. An economic breakdown is more than just economic. It leads quickly to a social breakdown that involves looting, random violence, fraud and decadent behavior.

The Roaring ’20s in the U.S. (with Al Capone and Champagne baths) and Weimar Germany (with riots and cabaret) are good examples.

Looting, burglary and violence in the midst of a state of emergency are the shape of things to come.

The veneer of civilization is paper-thin and easily torn. Most people don’t realize how fragile it is. But they’re going to learn that lesson, I’m afraid.

Expect social disorder to get worse long before it gets better.