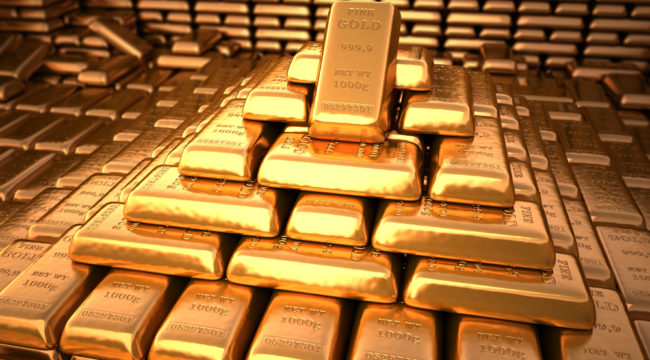 The World Wants Its Gold Back From the U.S.

We’re all familiar with the so-called “run on the bank.” It usually begins quietly with just a few depositors getting nervous about the solvency of the bank.

They line up to get their cash out before the bank closes its doors. Soon the word spreads and the line gets longer. The bank projects an air of confidence and gives cash to depositors who request it as long as they can, but pretty soon the cash runs out.

The classic image of this is the scene from the Christmas-season film It’s a Wonderful Life, with Jimmy Stewart. We’ve all seen it. Now something similar is happening at the Federal Reserve Bank of New York.

What’s different is that the run on the bank involves gold, not cash. The New York Fed will never run out of cash because they can print all they need. But they could run out of gold.

Until recently, the New York Fed had about 6,000 tons of gold stored in its vaults on Liberty Street in Lower Manhattan. Contrary to popular belief, the gold stored there does not belong to the United States (the U.S. gold is stored in Fort Knox and West Point).

The Fed gold belongs to countries around the world and the International Monetary Fund.

Beginning a few years ago, central banks demanded the return of their gold to their home countries. Germany was the most prominent example, but there were others, including smaller holders such as Azerbaijan.

The process is difficult because the Fed bullion consists of old bars, some stacked up since the 1920s, that don’t meet today’s standard for purity and size. This doesn’t mean the gold is bad, just that the bars have to be melted down and re-refined to meet the new standards.

Now, one of the largest holders, Turkey, is reclaiming its gold also. Turkey has had 220 tons stored in the U.S.

And Turkish President Recep Tayyip Erdoğan has recently suggested that international loans should be made in gold instead of dollars.

Here’s what he told the Global Entrepreneurship Congress in Istanbul on April 16:

I made a suggestion at a G-20 meeting. I asked: Why do we make all loans in dollars? Let’s use another currency. I suggest that the loans should be made based on gold…

The gold stash in New York is dwindling and global behavior is coming to resemble a run on the gold bank.

Skeptics claim not all of the gold is there. My own view is that New York does have the gold, although a lot of it may be leased out to support gold price manipulation by the big banks and China.

Either way, we may soon find out if New York has to shut its gold doors just like any other insolvent bank.

And we may also find out how much patience the world has left with the dollar.