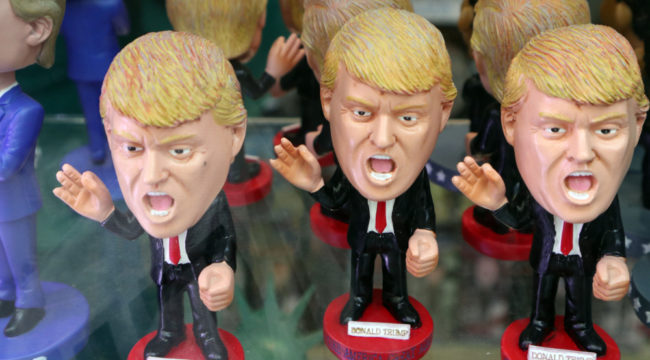 Will Trump “Wag the Dog”?

“Are they trying to guarantee Trump will let the missiles fly?”

Our colleague Dave Gonigam of The 5 Min. Forecast had just caught wind of Monday’s FBI raid on the office of Trump’s attorney, Michael Cohen.

Perhaps you recall the 1997 film Wag the Dog.

Perhaps you also recall that President Clinton — no need to specify — attacked suspected al-Qaida targets around the time Monica Lewinsky appeared before a grand jury.

Then you grasp Dave’s half-joking, half-serious reaction to Monday’s business.

In the Hollywood film, the fictional president faced — like Clinton — a sex scandal.

What kind of scandal faces this president?

According to The New York Times, the G-men raiding Cohen’s office sought:

Information about Karen McDougal, a former Playboy model who claims she carried on a nearly yearlong affair with Mr. Trump shortly after the birth of his youngest son in 2006. Ms. McDougal was paid $150,000 by American Media Inc., the Enquirer’s parent company, whose chief executive is a friend of Mr. Trump’s.

Agents were also searching the office and hotel room of the lawyer, Michael D. Cohen, for information related to Stephanie Clifford, better known as Stormy Daniels, a pornographic film actress, who also said she had sex with Mr. Trump while he was married. Mr. Cohen has acknowledged that he paid Ms. Clifford $130,000 as part of a nondisclosure agreement to secure her silence days before the 2016 presidential election.

Now, to our understanding, the Mueller probe was empanelled strictly to investigate Russian tampering with the election.

We were unaware that Mesdames Clifford and McDougal were agents of sinister Russian forces.

But if you cast a net of sufficient width… you will ultimately catch yourself a fish.

“Show me the man and I’ll show you the crime.”

That would of course be Lavrentiy Beria… head of Stalin’s secret police.

Even your upright standing editor may have minimally transgressed the law at some distant point — unwittingly, of course.

For example, there was that one occasion when the police collared us for — no, let it pass.

Of course… we never set our cap for the highest office in the land.

That is, they propelled Trump to the White House by throttling politically harmful stories.

And so the carousel goes round.

But will President Trump “wag the dog” to divert attention from his personal scandal?

We have no answer.

And let the record show:

Trump had already taken to the warpath before Monday’s FBI raid.

But even a prickly fellow like Trump wallows in the applause of his critics.

And when Trump launched last year’s missile attack on Syria, even his bitterest foes gave him his three cheers for “doing the right thing.”

But what do Daily Reckoning readers think about this Syria business?

“I find it to defy credulity that hours after Trump declares that we will be pulling out of Syria, Assad would decide to gas his own people,” says one reader. “These are Deep State false flags.”

“Trump should never attack Syria,” argues another reader. “He should leave Syria and clean out the Deep State at home!”

Yet another reader sniffs a rodent:

“Right on cue — another chemical attack. This has become too predictable. Almost surely another false flag effort to get the USA involved.”

“Do not attack Syria,” agrees a fourth. “There is no definite evidence Assad did the chemical attack. Madness to go to an uncontrollable war over this.”

Lest we misinterpret his position, a fifth reader thunders:

“I’ll make my answer as brief and pointed as possible: Not just no, but hell no!”

We could continue… but the timekeeper is tapping his watch.

In all, not one single reader lined up behind an attack.

Alas, we have omitted one central character from our sordid tale — Mrs. Melania Trump, first lady of the United States.

Imagine the lacing the president must be taking right now:

So what was the deal with this Stormy Daniels? How much did you pay that Playboy bunny to keep quiet? How many other women did you pay off? And what were you really doing last Tuesday night when you said you were working late?

If anyone wishes to distract from the news… it is certainly President Trump.

The missiles are heading your way — and soon.