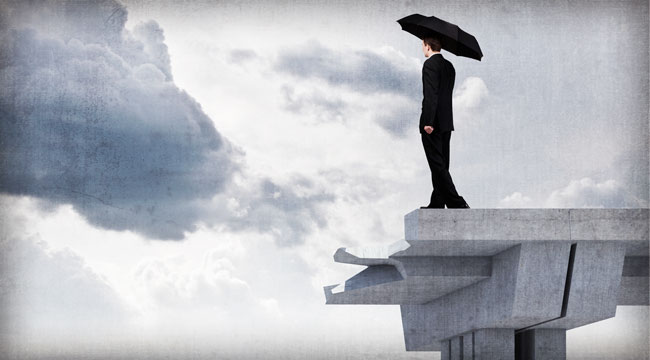 Why the U.S. Recovery is Such a Disappointment

‘So we have, indeed, had a disappointingly slow recovery, and our consistent expectations for a pickup in growth have been dashed over a number of years… And the labor market is behaving in some perplexing ways and showing patterns that are novel.’ – Janet Yellen in a speech to the Economic Club of New York on April 15th

We certainly agree on the first acknowledgment — ‘a disappointingly slow recovery’. This has been the most agonising post-recession recovery since The Great Depression, in spite of record stimulus efforts including zero bound interest rates.

We definitely agree with expectations being consistently dashed. The people at the Fed couldn’t hit a target (any number: employment, GDP, CPI) if their lives depended on it.

This employment and income negativity is feeding into social mood and how people see themselves.

However, the new post Great Financial Crisis model is running on unleaded cautious consumption. Little wonder the economic motor is sputtering. Thirdly, the US labor market is apparently behaving in perplexing ways. Really?

Only someone completely devoid of contact with the real world (and Janet’s life of academia definitely qualifies her for this) could describe the goings-on in the US labour market as ‘perplexing and novel’.

From where we write — on the distant shores of Australia we’ll help Janet unravel the ‘mystery’ confounding her. The Washington Post recently tracked the decline in real (after inflation) median earnings for US males (based on education levels) between 1969 and 2009.

The ‘real’ income for the lowest skilled workers is 65% lower compared to 45 years ago.

Michael Greenstone and Adam Looney of the Hamilton Project went deeper into the median income numbers and discovered this rather depressing finding:

There are a couple of assumptions you can draw from this:

In 1977, US Congress amended the Federal Reserve Act, outlining the Fed’s new and improved mission in life:

‘…long run growth of the monetary and credit aggregates commensurate with the economy’s long run potential to increase production, so as to promote effectively the goals of maximum employment, stable prices and moderate long-term interest rates.’

During the period that the Fed was charged with the responsibility of ‘maximum employment’, real incomes fell and eventually, workforce participation declined. Well done. The clueless Fed is now scratching its head over the workings of the jobs market. They never understood it in the good times, why should they be any better informed in the tough times?

The US workforce participation rate has fallen back to levels last seen in 1975. Perhaps baby boomers influence these numbers by opting for early retirement. Most likely the greater influence is the anaemic recovery post-GFC. The diminished ranks of US taxpayers bear the cost of this workforce exodus.

The Heritage Foundation produced a graphic on how a US tax dollar is spent. Major entitlements — Medicare, Medicaid, and Social Security — take the lion’s share at 49%.

Income security and other benefits — federal employee retirement and disability, unemployment benefits, welfare programs (food and housing assistance) — account for a further 20%. (NOTE – the cost of Obamacare is NOT in these figures).

Nearly 70% of every tax dollar is going in entitlement spending.

When you consider the government provides you with a fortnightly income cheque, access to medical services, food stamps and housing, where’s the incentive for an unskilled or even semi-skilled worker to actively seek employment?

According to a recent study by Greg Kaplan, Assistant Professor of Economics at Princeton University, there are over 16 million US families where no-one has a job:

One in five families where no-one is employed. That is a truly appalling statistic for the once great US economy.

This employment and income negativity is feeding into social mood and how people see themselves.

The Pew Research Center released the findings of their latest research on ‘what class people consider they belong to’. Armed with the knowledge above, the results are not that surprising. Pre-GFC only 25% perceived themselves as ‘lower class’, today it’s 40%. 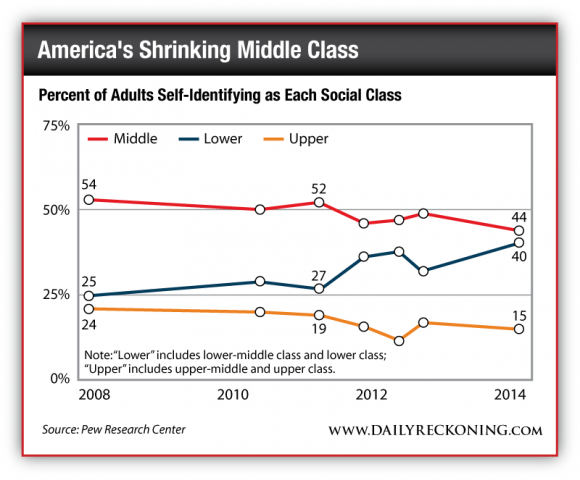 Surprisingly, the so-called ‘wealth effect’ has not had the desired psychological impact the Fed was hoping for. After six years of pumping up asset values, less people see themselves in the ‘upper class’ category.

The only ‘trickle down’ effect the Fed has created is people cascading into poverty, whether real or imagined.

The jobs market is not that perplexing — an economy bereft of high octane credit is shrinking. The more an economy contracts the less likely ‘budget-squeezed’ consumers are to borrow, thus a self-feeding loop is created. While you have a government that is prepared to underwrite the budgetary cost of its grand social programs with printed dollars, more people will opt for entitlement over employment.

What really perplexes me is how long this whole unproductive and artificial charade can continue before there is large scale social unrest or the system buckles under its own idle weight. The only certainty and consistency in all of this is that the Fed will remain as clueless as they have been.

Ed. Note: The “disappointingly slow recovery” continues to slowly disappoint, and with the Fed at the helm of the economy, that’s not likely to change anytime soon. So it’s best to stay informed and prepare your portfolio for whatever comes next. Sign up for the FREE Daily Reckoning email edition, right here, to learn how you can gain exclusive access to some of the world’s best investment research. Current readers are treated daily to no less than 3 chances to discover real, wealth-building profit opportunities. And it’s delivered, FREE, direct to your email inbox. So don’t wait. Click here now to sign up for FREE.