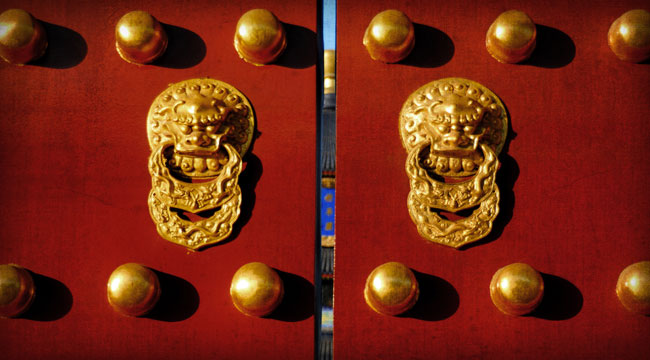 The following essay was published on May 18th. Given China’s official update of it’s gold reserves this morning, however, we felt it’s necessary re-reading for investors. Read on…

One of the most persistent story lines among gold bugs and market participants who foresee the collapse of the dollar goes something like this:

China and many emerging markets including the other BRICS are looking for a way out of the global fiat currency system.

That system is dominated today by the U.S. dollar. This dollar dominance allows the U.S. to force certain kinds of behavior in foreign policy and energy markets.

Countries that don’t comply with U.S. wishes find themselves frozen out of global payments systems and find their banks unable to transact in dollars for needed imports or to get paid for their exports. Russia, Iran and Syria have all been subjected to this treatment recently.

China does not like this system any more than Russia or Iran but is unwilling to confront the U.S. head-on.

Instead, China is quietly accumulating massive amounts of gold and building alternative financial institutions such as the Asia Infrastructure Investment Bank, AIIB, and the BRICS-sponsored New Development Bank, NDB.

When the time is right, China will suddenly announce its actual gold holdings to the world and simultaneously turn its back on the Bretton Woods institutions such as the IMF and World Bank.

China will back its currency with its own gold and use the AIIB and NDB and other institutions to lead a new global financial order.

Russia and others will be invited to join the Chinese in this new international monetary system. As a result, the dollar will collapse, the price of gold will skyrocket and China will be the new global financial hegemon. The gold bugs will live happily ever after.

The only problem with this story is that the most important parts of it are wrong. As usual, the truth is much more intriguing than the popular version.

As with most myths, parts of the story are true. China is secretly acquiring thousands of tons of gold. China is creating new multilateral lending institutions. No doubt, China will announce an upward revision in its official gold holdings sometime in the next year or so.

In fact, Bloomberg News reported on April 20, 2015, under the headline “The Mystery of China’s Gold Stash May Soon Be Solved,” that “China may be preparing to update its disclosed holdings…”

But the reasons for the acquisition of gold and the updated disclosures, if they happen, are not the ones the blogosphere believes. China is not trying to destroy the old boy’s club — they are trying to join it.

China understands that despite the strong growth and huge size of its economy, the yuan is not ready to be a true reserve currency and will not be ready for years to come.

It is true that usage of the yuan is increasing in international transactions. But it is still used for less than 2% of global payments, compared with over 40% for the U.S. dollar.

Usage in payments is only one indicium of a true reserve currency, and not the most important one. The key to being a reserve currency is not payments, but investments. There needs to be a deep, liquid bond market denominated in the reserve currency. That way, when countries earn the target currency in trade, they have someplace to invest their surplus.

Right now, if you earn yuan trading with China, all you can do with the money is leave it in a bank deposit or spend it in China. There is no large yuan-denominated bond market to invest in.

In addition to a bond market, you need the “plumbing” of a bond market. This includes a network of primary dealers; hedging tools such as futures and options; financing tools such as repurchase agreements, derivatives, clearance and settlement channels; and a good rule of law to settle disputes, secure creditors and deal with bankruptcies.

China has none of these things on the needed scale or level of maturity. When it comes to true reserve currency status, the yuan is not ready for prime time.

China is also not ready to launch a gold-backed currency. Even if it has 10,000 tons of gold — far more than it currently admits, the market value of that gold is only about $385 billion. China’s M1 money supply as of April 2015 is about $5.4 trillion. In other words, even on assumptions highly favorable to China, their gold is only worth about 7% of their money supply.

Historically, countries that want to run a successful gold standard need 20-40% of the money supply in gold in order to stand up to bank runs in the market. China could reduce its money supply to get to the 20% level, but this would be extremely deflationary and throw the Chinese economy into a depression that would trigger political instability. So that won’t happen.

So what is China’s plan?

The best way to do that is to increase its voting power at the IMF and have the yuan included in the IMF basket for determining the value of the special drawing right. Getting those two things requires the approval of the United States because the U.S. has veto power over important changes at the IMF. The U.S. can stand in the way of Chinese ambitions.

The result is a kind of grand bargain in which China will get the IMF status it wants, but the U.S. will force China to be on its best behavior in return. This means that China must keep the yuan pegged to the dollar at or near the current level. It also means that China can have gold but can’t talk about it. In order to “join the club,” China must play by club rules.

The rules of the game say you need a lot of gold to play, but you don’t recognize the gold or discuss it publicly. Above all, you do not treat gold as money, even though gold has always been money.

Moreover, just because the grand bargain is in sight does not mean it will be easy to realize. Both sides are jockeying for leverage.

Beijing launched its own development bank to put pressure on the IMF. The U.S. Treasury blames the tea party for delays in approving China’s new votes at the IMF. Meanwhile, the White House does nothing to break the logjam in Congress. The White House is happy to let China twist in the wind while the game goes on behind closed doors.

Meanwhile, China will probably announce its increased gold holdings later this year. But don’t expect fireworks. China has three accounts where they keep gold — the People’s Bank of China, PBOC; the State Administration of Foreign Exchange, SAFE; and the China Investment Corp., CIC.

China can move enough gold to PBOC when they are ready and report that to the IMF for purposes of allowing the yuan in the SDR. Meanwhile, they can still hide gold in SAFE and CIC until they need it in the future.

China will also probably be admitted into the SDR basket later this year. Far from launching its own gold-backed currency, China will be acknowledging that the SDR is the true world money as far as the major powers are concerned.

Why would China want to give up on fiat money any more than the Fed or the European Central Bank? All central banks prefer paper money to gold because they can print the paper kind. Why give up on that monopoly of power?

Gold is still the safest asset, and every investor should have some in their portfolio. The price of gold will go significantly higher in the years ahead. But contrary to what you read in the blogs, gold won’t go higher because China is confronting the U.S. or launching a gold-backed currency.