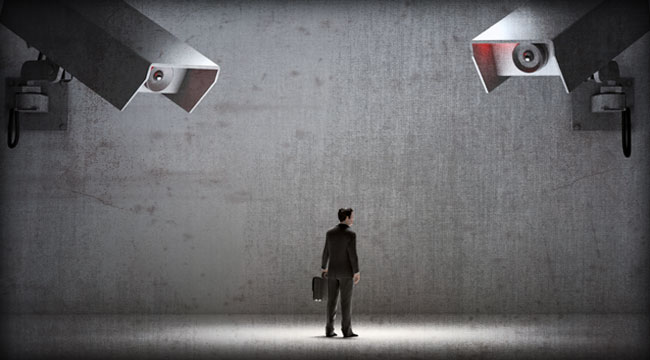 A Tipping Point for Liberty Against Leviathan

Continuing revelations of the extensive scope of the U.S. government’s mass spying program, piled on top of decades of foreign intervention and liberty suppression at home, can lead Americans to question if they should give up their work for peace and liberty. Nevertheless, there is reason for hope that pursuing this work will yield success.

Speaking with host Neil Cavuto on Fox Business, Ron Paul Institute (RPI) Advisory Board Member Andrew Napolitano warns that the U.S. government has established a mass spying program so invasive that “we are close to a generation of Americans who will not even know what privacy means because they will grow up in a society in which everything they do from the moment of their birth — no matter how intimate or private the moment — will be monitored by the government, and they will accept that.”

[T]here is hope for reversing the growth of government threats to liberty and peace through the crisis and leviathan process.

The mass spying program thus appears to be another example of the process described by RPI Academic Board Member Robert Higgs whereby the government uses a crisis, in this case terrorism, to justify expanding government power at the expense of liberty. Higgs explains this process:

“How do once-free people lose their liberty? The formula may be stated succinctly: crisis and leviathan. Alternatively, and somewhat more fully stated, the procedure for the government officials and their supporters who hope to gain by quashing the people’s liberties is (1) cause a serious crisis, thereby heightening the public’s fears, and (2) blame others for the crisis, pose as the people’s savior, and thereby justify the seizure of new powers allegedly necessary to remedy the crisis and to prevent the recurrence of such crises in the future. This gambit is as old as the hills, yet, given the right ideological preconditions, it works every time. Strange to say, the people never learn (in part because these experiences produce ideological change that fortifies the fiscal and institutional changes the government makes during the crisis).”

Watching the government repeatedly using crises to grow larger at the expense of peace and liberty can be disheartening, especially considering that the government even creates many of the crises. For example, the U.S. government’s wars, foreign aid, and sanctions motivate violent acts against Americans.

The intentional operation of this process was rather famously explained by Rahm Emanuel in the context of a 2008 economic crisis. Gerald F. Seib reports in the Wall Street Journal:

“This opportunity isn’t lost on the new president and his team. ‘You never want a serious crisis to go to waste,’ Rahm Emanuel, Mr. Obama’s new chief of staff, told a Wall Street Journal conference of top corporate chief executives this week.

“He elaborated: ‘Things that we had postponed for too long, that were long-term, are now immediate and must be dealt with. This crisis provides the opportunity for us to do things that you could not do before.'”

Yet, there is hope for reversing the growth of government threats to liberty and peace through the crisis and leviathan process.

In the Fox Business interview, Napolitano points to a statement the National Security Agency issued in reaction to a question U.S. Sen. Bernie Sanders submitted to the agency. Napolitano believes the NSA’s statement clarifying that the NSA spies on members of Congress the same as the agency spies on other Americans may provide the impetus for Congress to use the “power of the purse” to curtail the spying.

Additionally, politicians should take heed of the apparent movement of public opinion in the U.S. toward supporting a non-interventionist foreign policy and fearing big government. Indeed, last year public opposition helped prevent a U.S. government attack on Syria and helped encourage the U.S. House to nearly pass an amendment to significantly undercut the NSA’s mass spying. This happened despite the Obama Administration and bipartisan congressional leadership lining up on the opposing side in both instances.

Meanwhile, state and local governments are going their own way on marijuana policy, chopping away at the war on drugs — a decades long travesty the U.S. government uses to expand its power, enrich special interests, and trample liberty.

Are we approaching a tipping point where the U.S. government reverses course and substantially increases its respect for civil liberties at home and peace with other nations? While it can be disheartening to witness the U.S. government leviathan with its multiple simultaneous wars, mass spying, rise of SWAT, and record-setting incarceration rate, rather sudden changes can occur in political systems that seem nearly omnipotent.

Whether a tipping point is near or far, people who value respect for liberty at home and a non-interventionist foreign policy can continue their educational efforts to lay the groundwork for change. Then, should an opportunity arise for radical change in one policy area or many, that change will more likely be towards greater respect for liberty and peace.

We can look again to Higgs for some valuable advice about taking on the government leviathan. Higgs writes in an Independent Institute article in June:

“State power is the most dangerous force in modern life. State rulers, seeking their own aggrandizement and enrichment, employ this power systematically to plunder and abuse their subjects. Of course, they cannot act in this way without the assistance of many others, among whom some assist willingly, some in return for adequate compensation, and many only under duress.

“To maintain their grip on power, state rulers (1) bamboozle as many subjects as possible; (2) co-opt those whose cooperation or support is essential by bribing them with various sorts of payoffs; (3) intimidate those who are not essential and not fooled by threatening them with fines, imprisonment, and other punishments; and (4) kill those who are not essential, are not fooled, and will not bend to intimidation.

“Anyone who seeks to stymie or overturn state power must block these state actions or render them less effective. Resistors therefore have many options.

“First, they may work to reduce the number of people who succumb to the rulers’ bamboozlement by exposing the rulers’ lies, spreading truthful information, and revealing the rulers’ venality and cynical disregard of the people’s natural rights and the general public interest. People may withdraw their children from government schools and teach them at home; they may spread truthful information about the horrors of the state and the glories of freedom by means of the Internet and the World Wide Web. In short, people may use the word processor that is mightier than the Predator drone (formerly the pen that is mightier than the sword) as well as face-to-face communication to reeducate those who have been taught, conditioned, and forced to drink the rulers’ Kool-Aid.”

Read the rest of the options Higgs offers here.

There are many ways individuals can take part in advancing peace and liberty against crisis and leviathan. And there is reason for hope. Some encouragement may be gained from reflecting on the concluding sentences of Malcolm Gladwell’s intriguing book The Tipping Point: How Little Things Can Make a Big Difference:

“In the end, Tipping Points are a reaffirmation of the potential for change and the power of intelligent action, Look at the world around you. It may seem like an immovable, implacable place. It is not. With the slightest push — in just the right place — it can be tipped.”

Adam Dick
for The Daily Reckoning

Ed. Note: While these tipping point opportunities may seem few and far between, there are things you can do now to preserve the freedom and privacy you still have. And the FREE Laissez Faire Today email edition offers you several chances a day to discover specific ways to do just that. Sign up for FREE, right here, to learn more. After all, it’s these little victories that will help make a better tomorrow for your children.

Migrant Crisis and the End of the EU

Europeans are paying the price for their open-door welfare state migration policy and support for US interventionist foreign policy that lead to mass migrations. Is this the end of the political union? On today’s Liberty Report, Daniel McAdams and Dr. Ron Paul investigate…

Adam Dick is a writer at the Ron Paul Institute for Peace and Prosperity.